Share All sharing options for: Luiz 'improving' ahead of Champions League final

Bob spoke to Chelsea TV over the weekend. He dropped some pretty damn good news. 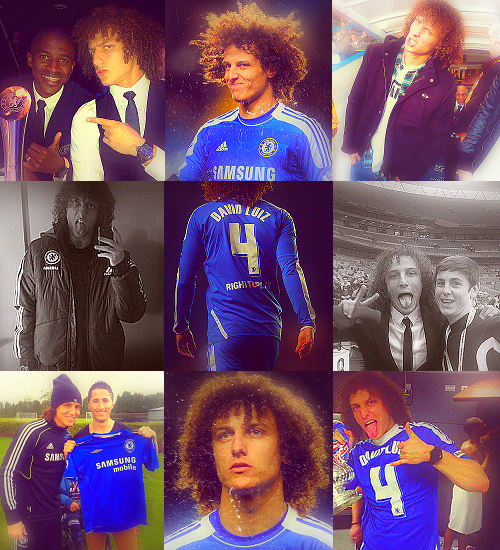 Thanks to Los Blancos on Tumblr for the collage.

Our entertaining Brazilian offered his thoughts on the hamstring injury that has kept him off the field for several weeks. In fact, it's been a month since David Luiz has unleashed his unique - and effective - brand of football on the world stage.

Roberto Di Matteo revealed after Sunday's 2-1 win over Blackburn in our final league match of the season that he thought that both Luiz and Gary Cahill, also dealing with a hamstring strain, could be ready for the Champions League final - as they have been participating in training. Still, any decision is likely to come much closer to kickoff.

Bob, for his part, said he feels pretty good about where he is at the moment. Well, as good as someone with a bum hamstring can feel, I guess.

It is improving now and I am feeling better day by day. On the pitch I am more comfortable and I want to play football. My place is on the pitch, not outside it. I wanted to play against Barcelona and I wanted to play the FA Cup Final, but now I have one more game more special than all the others and for this I think and I hope that on Saturday I play against Munich.

We can only hope that Bob will be ready for Saturday. Not only that, but we must also pray to the gods that Cahill will be able to feature as well. We really must have both of these guys in Munich if you ask me. If not, we could be in for a highly sour evening of footballing spectacle.