The Architects' Journal have managed to acquire some very early concept sketches for Chelsea's proposed stadium at Battersea Power Station, and they've published them today on their website (linked). Having sat through some equivalent meetings over in the States, I wasn't expecting much more than some very vague scribbles, and that's exactly what you'll find if you go to the article above.

The journal has also released an editorial that gives very strong backing to the concept:

The exclusive early concept sketch by KPF, who are working with Rafael Viñoly on the bid, shows a design that both maintains the integrity of the original building, while giving this stunning white elephant a brilliant legacy. If built, it could join FC Braga by Eduardo Souto de Moura as one of the most architecturally atmospheric stadia in the world.

If you've ever seen the Quarry at Braga, you'll know that that's incredible praise. Architects love this plan. Let's try to dig a little deeper into the sketches so we can get an idea of what we might have on our hands here...

Here's how I'd interpret those sketches if I were on this project: 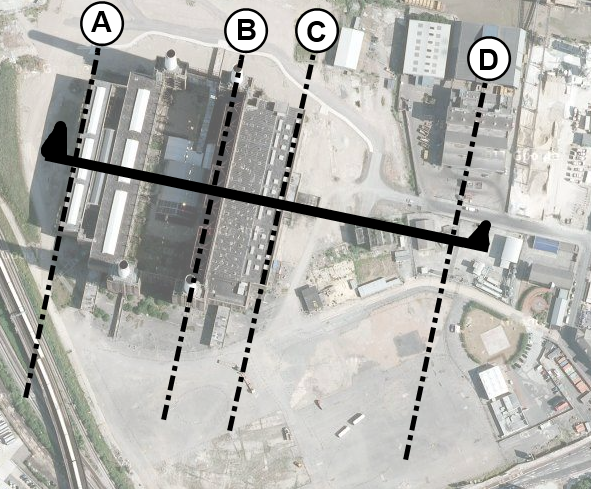 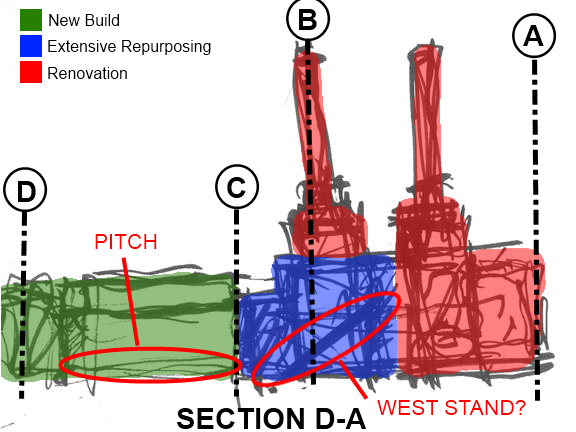 Note: This is just my interpretation of the sketches. It should absolutely not be taken as KPF's plan for Battersea Stadium. I'm not even doing engineering work anymore!

Some comments: The existing building will be almost completely intact, but it looks like the western side of the new build will impinge upon the original structure. That join will be fairly complicated, but architecturally this whole thing will be really cool. The pitch will run parallel to the lettered gridlines in the satellite photo between C and D, which means that (duh) it won't be inside the original power station. The western turbine hall starts at Gridline A, incidentally.

This is not an easy project, but from a feasibility standpoint (especially in London, where the only thing you'd really have to worry about is restoring the gravity system rather than adding a significant lateral capacity to the existing structure) it's hardly impossible. I've never worked with KPF before, but they've got an impressive portfolio and I'd fully expect them to produce a remarkable fusion of a new stadium and Battersea Power Station if Chelsea end up winning their bid.

This is pretty neat you guys.