Chelsea grabbed a late win against Wigan through a Juan Mata goal at the 92th minute. Mata was a tad fortunate to have scored that goal. Fernando Torres hit magnificent strike that smashed the far post and the ball landed right in front of Mata who guided it into the net. However, it was not simply down to luck that Mata happened to be there – right place at the right time – to snatch the glory. Determination and perseverance played a huge role too. Second-by-second break down of the build-up to the goal after the jump. 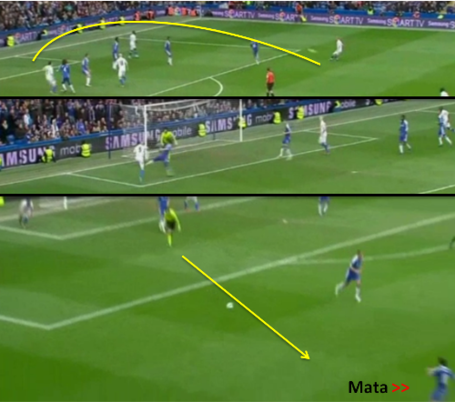 With four minutes of stoppage time left on the clock, Chelsea pushed on to find the winner which could keep their hope of finishing 4th barely alive. David Luiz brought the ball out from defense but his forward pass was intercepted by Gary Caldwell and a Wigan counter attack began. Fast forward a few seconds and Caldwell was at the end of a cross inside the Chelsea box. Luiz did enough to put the Wigan defender off and Cech calmly collected the tame effort.

Without any hesitation, the Chelsea keeper threw the ball forward to Mata who had dropped deep into his own half, on the right side, to start the counter-counter-attack. Approximately 15 seconds later, the Spaniard will score the winner for Chelsea at the other end. 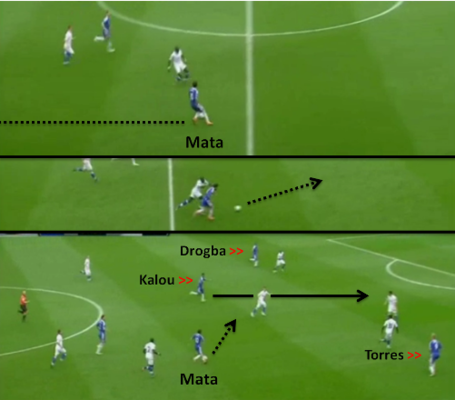 [91:49] Mata shrugs off a challenge near the center circle and dribbled forward.

Mata's path to the Wigan box was not free of adversaries. He was immediately closed down near the center cirlcle by Mohamed Diame. Considering their stature and physical strength, I don't think it is totally absurd that I have a mental image of David facing off Goliath at this piont. But Mata beat Diame, who had only been on the pitch for about 20 minutes (aka fresh legs), with one of the oldest tricks in the book -- quick change of pace. The Spaniard slowed down as Diame approached and suddenly moved up a gear to leave his marker behind.

As he dribbled down the center channel, Mata had three teammates ahead of him -- Drogba on his left, Kalou making a diagonal run towards the D of the Wigan box and Torres on his right.

Give and Go... around 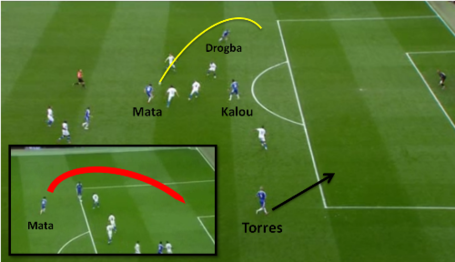 [91:53] Mata chips a pass to Drogba and immediately makes an overlapping run on the left.

Mata ran into a little bit of a traffic about 30 yards out from Wigan goal. Under pressure from Wigan defenders, he made a chip pass to Drogba on the left. Considering Mata had been playing for 90 minutes and that he had played for 80 minutes just 3 days ago (against Benfica), it would have been understandable if he'd let his three forwards do the job from this point on. Stop running. Hang out around the edge of the box or drift into the box and wait for the ball to somehow fall into his lap. No one would have called for his head if he had done that.

But that's NOT what Mata did after he made the pass. As Drogba got the ball under control, Mata made an overlapping run around the Ivorian. This was a smart move because he would not have been suited to attack a cross from inside the box. With the overlapping run, Mata provided an option for Drogba, and the Spaniard got into a good position for him to cross if Drogba had chosen to pass to him. 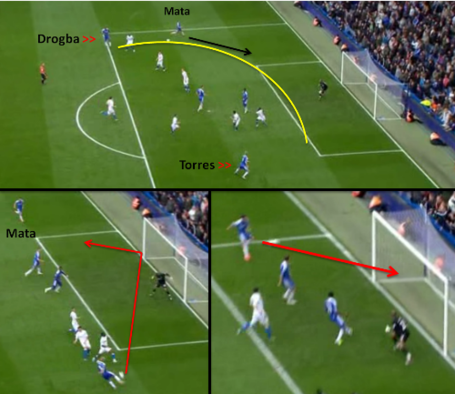 Drogba opted to cross the ball to Torres on the right. Chelsea number 9 brilliantly volleyed the cross against the far post. The ricochet landed right into Mata's run and the midfielder bundled the ball into the net.

Torres was unlucky that his super strike didn't smash the net. Mata, meanwhile, was fortunate to have scored. But if there were anyone deserving of a little luck, it was Mata who had shown tremendous determination and perseverance in the build-up to this goal.