Share All sharing options for: Chelsea 2-1 Benfica (3-1 aggregate): Revenge is on the menu

Chelsea made it far more difficult than it ever should have been, but ultimately had enough in their collective pocket to dispatch Benfica and reach the Champions League semifinals. Some say we were embarrassingly poor; those people, of course, are slightly out of their mind. 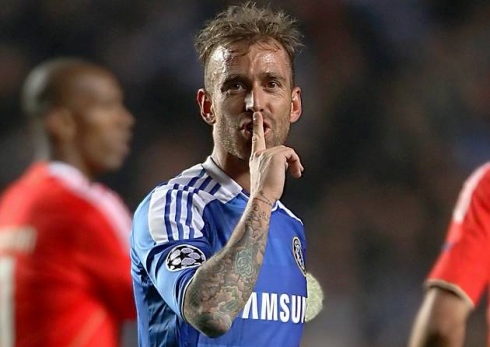 It kind of amazes me the amount of negative reaction there has been from our own support after this result. Of course there has been a mass amount of nonsense from the Benfica camp, coaching staff and the like, but to see plenty of Chelsea souls suggesting we were second best really is baffling.

Were we good in the second leg? No, of course not. Were we better than a poor Benfica team? Yes.

Most are pointing to the bright start and the shear amount of possession the Portuguese boys had at Stamford Bridge. Ah, those great football possession fetishists. However, these same people fail to take into account Chelsea's obvious strategy of soaking up pressure and then hitting a team minus a basket of first-team defenders on the counter. The strategy had its flaws, most definitely, but there's no question we created a metric ton of chances to kill off the tie. If we had been even moderately serviceable in front of goal on Wednesday, this match would've ended 4-1.

Miss of the fucking season

Anyway. Back to the Benfica whinging. Here's what Jorge Jesus had to say afterward:

I'm really proud of my players. Over the two games we proved we were much the better team. I can't understand how we're out. What hurts me is that we've knocked out better teams than this Chelsea. That's what leaves me with a certain sense of revolt.

Is this guy for real? Insane. This is kind of shitty because, prior to this tie, I had solid respect for Benfica as an organization. I have enjoyed watching them over the last few years and, of course, they helped progress the careers of two of our own - David Luiz and Ramires. There also did some good work on Manchester United, which can't possibly hurt your reputation in my opinion.

But this? This is petty. You were poor over two legs in getting defeated by an extremely average Chelsea side. Sack up and accept it. The club has also apparently lodged an official complaint about the officiating in Wednesday's game. For what may I ask? For the referee taking the absurd stance of actually booking one of your players for dissent and then sending off said player for what was clearly a yellow card offense? Yeah, right.

As for the game, it wasn't anything to cherish - that's for certain. It wasn't that different from the first leg really, in that we were completely fine with conceding possession and some semblance of space to Benfica comfortably in the fact that they would offer up a hell of a lot of shots from distance. The difference in the way they approached the game this time around, however, was in their energy, something that was desperately missing in Lisbon. Still, they didn't really do much with the ball as a whole, testing Petr Cech on a couple of occasions.

I'd say much of the problem with our performance came in the way we responded to gaining a man advantage. Instead of pushing to kill off the match - like many wanted - we continued to look for openings on the counter. I personally didn't have a problem with this, especially considering the amount of chances we had to wrap up the tie. But we didn't finish any of them off (at least until the end), and that compounded frustration.

Such profligacy sort of sums up this season to be honest, even if we have improved over the past month. What this performance really did was confirm that we still have a hell of a long way to go to get back to our best. I don't think there's a question of where we stand amongst the final four teams left in the competition - firmly fourth. That being said, we're still in the damn competition with a shot, and that's more than a plethora of elite football clubs can say at the moment.

So, Barcelona next. I actually kind of love it.

Feel free to write us off, people. Actually, most already have. I can't really argue with your stance. But, as Frank Lampard has said, we have unfinished business ahead. And, you know, it only takes a few moments of brilliance for this Chelsea team to come to life.