Share All sharing options for: Club Confirm JT Has Two Cracked Ribs- Will Play Through Pain

Ladies and gentlemen, I give you Dr. Manhattan. More, after the jump: 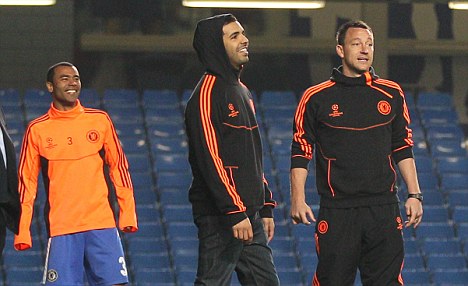 You have to tip your hat to John. I know, he gets plenty of stick- both warranted and unwarranted. But moments like this reaffirm our unrealistic and obnoxious admiration for the man. It's been confirmed by Chelsea that John has been playing with two cracked ribs suffered last week in Lisbon. His removal from yesterday's encounter was not simply precautionary, rather, he was in quite a bit of pain and had asked at halftime to be substituted. Chelsea have noted that this is a manageable injury, however, and the club are confident that John will play through the pain. Warrior status.

Now, I've never had a cracked rib mind, but I'd venture it would hurt unlike anything else. Simply breathing or twisting ones torso would be absolutely painful I'd suspect- that John is even lacing them up and taking to the pitch is just incredible. I have no doubt that he will be out there on the weekend, either in the Wigan match or the Fulham fixture. There's just no way he's missing any matches at this point in the season- even if it's more prudent that he does. I'd suspect the club are going to be cautious however, and not risk his longevity or involvement in our later stages in our two remaining cup competitions. Therefore, I'm thinking we'll be seeing a heavy dose of the Luiz-Cahill axis in the PL.

Hats off to John. He's simply made of stronger stuff than the average footballer. Give him hell if you want, but nobody in their right mind can deny that he's once again underlined his passion, commitment, and desire for the club to succeed. Taking to the field in such a state, is truly a remarkable feat.