Benfica are talking a lot of nonsense. Chelsea lie in wait, uncharacteristically quiet. What promises to be an edgy affair tomorrow will be tempered by the result of today's Barcelona Milan encounter. Edit: Barca it is. But before we can look ahead, however, we still have plenty of work ahead. It will be physical, and ultimately, it will come down to goals scored. More, after the jump: 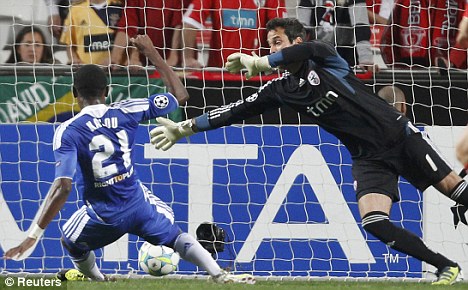 Benfica can't shut up. Everyone from captain to coach has an opinion on what happened last week. First, Jorge Jesus made the opening salvo:

"We were superior in many things to Chelsea, but they were luckier in one moment. We had more opportunities. We didn't deserve to lose tonight. We were the better side for long periods, had more shots on goal and Chelsea didn't see much sight of our goal. But what counts is the result."

Now, captain Luisao has entered the fray with this gem:

‘The game in Lisbon left a sour taste in the mouth because Chelsea did not deserve to win and it proved that the team who plays better does not always win. I do not know if the Chelsea coach reserved players in the first leg, but the truth is that we were the better team and 1-0 was a misleading result after what we saw on the field of play."

Good grief. There's plenty of value in being gracious in the face of defeat, but apparently the Benfica squad did not get that memo. Talk about sore losers, this is some ignant shit. Despite being roundly outplayed for stretches of the match, they appear unwilling to acknowledge that Chelsea were deserved victors. On to the specifics:

Why: To ensure a date with Barcelona/AC Milan in the semi-final, and, to shut these Portuguese fools up. Convincingly. Also, to keep the momentum that Roberto's regime have instilled going.

Them: After last week's encounter, Benfica have picked up some extra injuries which have left them light in the defensive department. Yay. Ezequiel Garay, Jardel and Miguel Vitor are all ruled out, leaving only one true center back (Luisao) available for selection. It will be, therefore, a makeshift defensive unit that's tasked with the responsibility of keeping the Chelsea forwards at bay. Speculation is rife that Javi Garcia will slot alongside the skipper, leaving Jorge Jesus' side lacking severely in the midfield department of power and awesomeness. As is, Benfica have to 'go for it' tomorrow, so the concerns will not necessarily be on keeping Chelsea from attacking, rather, getting out on the counter and causing as much immediate havoc as possible. We've already seen squads this year in Europe and on the domestic front that have effortlessly exposed us on the break, and Jorge Jesus will no doubt be watching the Napoli tapes to see where his Benficans can benefit. A victory over Braga on the weekend has kept Benfica a point behind the former in the title hunt (third place) and just four points adrift of Andre's former charge Porto. It's obvious that Benfica will be giving everything they have in trying to press forward in the competition- and once again it will be Nico Gaitain who is tasked with the responsibility of playing supplier extraordinaire. His build-up over the weekend culminating in Bruno Cesar's goal was brilliant, and a suggestion that the fatigue many have been positing for his recent decline in form may well be behind him. But one goal, or assist, does not restore him to demigod status, else Fernando would be in the Pantheon long ago.

Elsewhere, Pablo Aimar is fresh, rested, and ready to do battle once again. You'll recall he failed to impress in the first leg and was withdrawn in the second half. He was left off the squad for the Braga fixture and will no doubt be inserted in to the starting lineup tomorrow- his guile and experience will be essential for Benfica to steal a result. Of course, there is Oscar Cardozo, a genuine beast of a forward and true target man that will need to be converged upon much like he was in Lisbon. For Benfica to profit tomorrow, they'll likely need to do better with their possession. Though they might have created more chances than us, they were wasteful with their opportunities to test Petr Cech. Granted, there were two or three genuine opportunities where they might have leveled the score, but in the end Chelsea held firm and kept the Benficans at bay. More attacking prowess will be needed to advance, and certainly Jorge Jesus' side will be well-drilled and feeling confident of their chances after the weekend outing against Braga.

Us: Actually, things are pretty darn good these days. A loss and draw to City and Tottenham aside, the Di Matteo era has been a good one thus far. Restorative wins against this Benfica side and Aston Villa over the weekend see Chelsea entering the fixture in good shape. However, there have been mooted reports that we're carrying a medical list that would leave us surely depleted across the park. Speculation is that Didier, Bob, Ashley, Danny, Petr, and Bane all missed training yesterday in an effort to heal the wounds that presently ache them. 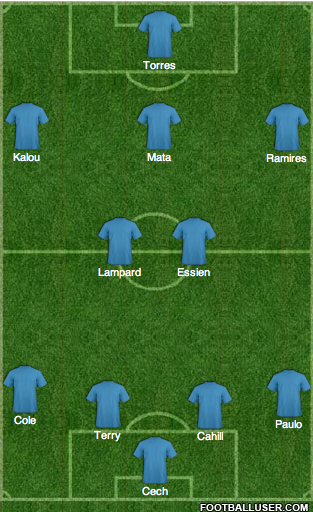 Look, I want Obi Mikel, Luiz, and Danny to feature. But I'm being realistic with the injures that are being carried, and with the very genuine fixture crunch forthcoming. Lest we forget, we still have to make fourth place a reality here and now. Essien, who has been reduced to a spot starter is more than capable of deputizing for Obi, while the experience of Frank will buffer our creative adventures. Gary over Bob, if Bob can't go, and yes, Paulo for Bane if Bane can't make it happen. No way does Bosingwa deserve a start after that incredible cameo last week in Lisbon from old faithful. Elsewhere, Fernando at the top, Didier's fitness notwithstanding. He's come to life and rightfully deserves another run after his excellent outing on the weekend. Meanwhile, Ramires on the right flank, which he handled well in the first leg, and goal-scorer Kalou on the left.

That's all I got for now guys. Join us tomorrow for the rant box and what promises to be an exciting match, any way you slice it.

Edit: Also, not sure what to file this under, but apparently Fernando had some free time this morning and got his hands on an extensive amount of bleach. The result, my god, is a blonde Beiber flop. Behold the awkwardness: 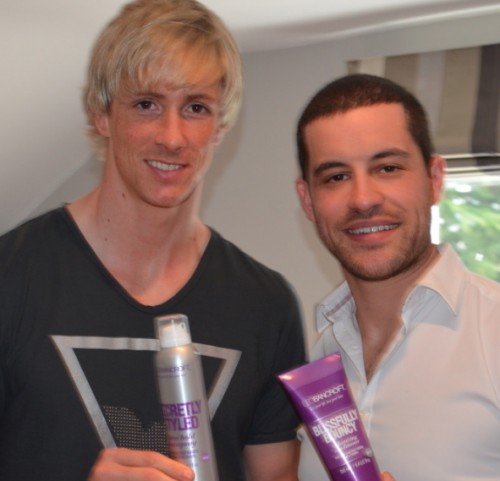