Obviously, I have a bone to pick with this lot. For it was on their turf that our season began its endless spiral into darkness- before Roberto strode in and saved the day. Needless to say, Sunday is all about redemption- nay, revenge. Coming off the heels of our impressive Barcelona victory, ahead of a critical showdown with Newcastle in midweek, this match is all about setting the record straight. 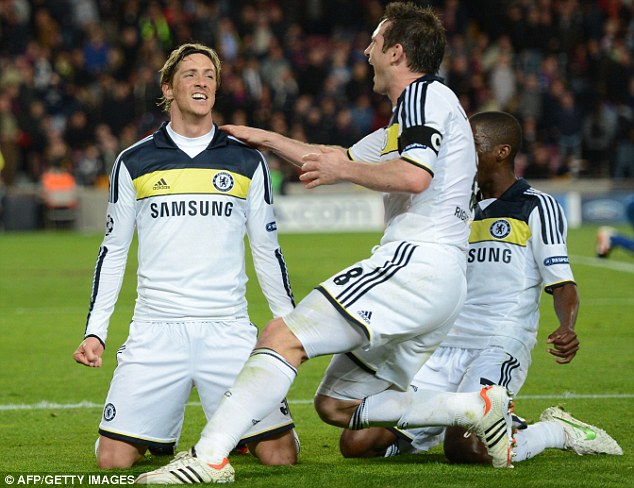 I think it's fair to say we've all been having a damn good week. Minus personal circumstances, namely a cold for yours truly, this has been one of the finer weeks in recent Chelsea history. Exorcising the demon that was Barcelona from our collective psyche was a thrilling experience. I think I've watched the highlights twenty times since Tuesday. Today's news has confirmed that Pep Guardiola has tendered his resignation- with many claiming that he's been shattered by three defeats on the trot. Don't get carried away friends, we didn't achieve anything in the way of forcing ole Pep to pasture- it was a matter of him electing to take a sabbatical more than Chelsea's undoing of his beautiful brand of football. But hey, if you want to take credit for this in some regard, we can't stop you. Damn it feels good to be a Blue. Now we're back to business and facing something of a defender crisis. Oye. On to the specifics:

Why: As stated above, this one is more about settling the score than anything else. Sure, points matter- but I'm the realist that tends to think our hopes for grabbing fourth place might finally be out of touch. With the specter of John Terry's looming court case hanging over the proceedings, and the pre-match handshake ritual already cancelled to avoid any embarrassment, this one promise to be a flashpoint of controversy. Certainly Anton Ferdinand will be getting plenty of stick from the Chelsea faithful- and I'll begin the chorus of disdain by saying that anyone ludicrous enough to think it's appropriate to use racial slurs is someone I'd rather not know. It will be a nasty environment, and certainly the officials will be calling this one tighter than previous matches. If anything, Sunday presents a chance to claim a victory against a QPR side battling to stay relevant as we enter the final weeks of the campaign. Three points accrued would boost what limited hopes we might have of finishing with our heads above water, but perhaps more importantly, could signal the end of QPR's fleeting dance with the Premier League.

Them: Resilient as they might be at times, this is a QPR side that's seen its fair share of disappointing results. Despite picking up a fortuitous three points against Tottenham last week, they've been all over the place in recent weeks. Since March 21st the Rangers have alternated between winning and losing on a bi-weekly basis. They beat Liverpool, lost to Sunderland, beat Arsenal, lost to United, beat Swansea, lost to West Brom, and most recently, beat Spurs. Using my awesome powers of deduction, they are therefore scheduled to lose to us on Sunday- only to close out the season with a win and loss against Stoke, and Manchester City respectively. Missing from Sunday's showdown are goalscorer Adel Taarabt due to a suspension, while Djibril Cisse and Samba Diakite are both strong doubts. It hasn't exactly been a season to remember for QPR- after a summer and January spent investing heavily in reinforcement players. QPR badly need points to survive what promises to be a tense race to the finish line, and will undoubtedly be giving their all for the result- but their away form has been awful this year.

As was previously the case under Andre, this match had all the makings of a classic 'trap'. That is, we lull ourselves into a false sense of supremacy or security, and enter the fray with the expectation that the job is already done. We score a goal, switch off towards the end, and ultimately concede a late equalizer. That used to be the norm for us- but since Roberto's taken control, things have gone back to their delightful best- i.e. our stodgy defense has returned to patrol. In their recent victories, Rangers have used a combination of pressing early and often across the pitch (lining up in a 4-3-3) while emphasizing hold-up play through Zamora, with Taarabt looking to cause havoc on the overlap. Should Chelsea deal with this threat, there should be nothing standing in the way of a three point success.

Us: It's been an eventful week to say the least. Returning from Barcelona, the squad added Gary Cahill to the list of walking wounded soldiers. He has been a confirmed absence for Sunday's proceedings, along with David Luiz (hamstring), and Ivanovic (suspension). Therefore, we're a little light in the defensive corps. Nevermind that, we also have a captain continuing to play with cracked ribs, and having to live down two calamities this weekend (that ridiculous red card he earned himself for no good reason, and of course, this dramatic racism case). You could say this would be a problem and not be far from the truth. It's unknown who will fill the vacant position next to John in the heart of the defense, but the expectation is that one of the right backs (Paulo, Jose) might deputize. Otherwise, there is the option of using Oriol Romeu, Michael Essien, or even youth captain Nathaniel Chalobah for a period of time. Frankly, it's anyone's guess and Roberto's guarding his decision at the moment.

Hot off the heels of the Barcelona triumph, I fully expect Roberto to shuffle the deck and offer a rest to some key personnel. Based on my understanding of how he likes to do things, I'm sensing the following lineup: 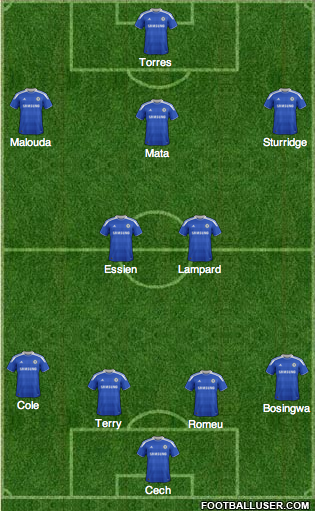 Ideally, Ryan Bertrand can get a shout at left back, but there are rumors that he's carrying a knock. He might recover in time to be used as a substitute. But with Romeu involved, it's better to have more experienced defenders around him to help cover for his naiveté. Elsewhere, Michael Essien returns to the midfield next to Frank (who likely will be substituted in the second half for Ramires), while Mata takes his spot in the center of the attack- flanked by that lovable due of Flo and Danny (henceforth known as fire and ice). Nando deputizes up top, considering he played all of ten minutes in Barcelona and managed to nab a goal for his troubles. Bear in mind, Fernando is currently the joint top scorer and the leader in assists under Roberto's command. Awesome sauce.

It seems simple enough to assume we have enough firepower left in the tank to get a result. Certainly, the racism issue will be hanging over the proceedings, and for Anton Ferdinand's sake, I hope he's strong enough to deal with the venom that will be heading his way. I can only speak for myself and Jack when I say that those who are caught using derogatory or inflammatory language in a hurtful manner should be punished to the full extent of the law. The club will undoubtedly be looking to root out any such issues on Sunday- and I would hope that we can get on with the match without any unnecessary outside interruptions. For those of us watching at home, lets hope we get a real commentating team other than the appalling selection of broadcasters we've been subjected to of late on FSC. Seriously, whoever that color commentator has been for our past few FSC matches, I could kick him in the face. Just awful.