Share All sharing options for: Scout Notes from QPR 1- 0 Spurs

Of the seven London derbies that Chelsea have played in the league this season, they have won exactly zero of them. Will eighth time be the charm when relegation-threatened QPR takes the field at Stamford Bridge this Sunday? We will hope so. We know the Blues are trying to take the short cut to the next season's Champions League by trying to win the big-eared trophy next month. But with the right results in the league, Chelsea could very well be fourth in the league by next Wednesday. For that to happen though, we will have to beat QPR first. In preparation for that game, let's see how they managed to get a 1-0 victory over Tottenham last weekend. Scout notes after the jump. 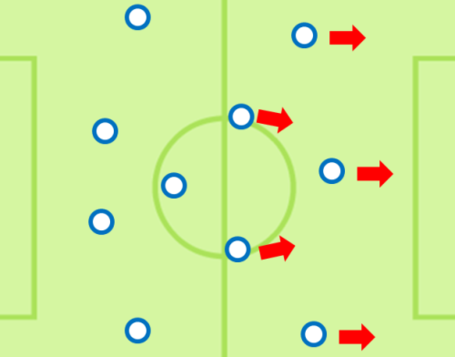 QPR took the field in a 4-3-3 shape and pressed Spurs from the beginning. The front three of Zamora, Taarabt and Mackie worked very hard to close down when Tottenham had the ball in their defensive zone while Diakite and Barton stayed tight on Sandro and Parker in the middle of the pitch. This early pressured worked. Spurs tried to pass out the back but their effort was poor and unconvincing. This caused a number of nervy moments in the back for Spurs. More than once, Friedel was put under unnecessary pressure by risky back passes. On a different day, QPR might have benefited from those defensive mix-ups.

They might come out pressing like this against Chelsea but the real question is "how long will they be able to sustain that kind of energy to press?" Ten or fifteen minutes of initial pressing could be dealt with but consistent pressing through out the game is another story. We didn't get to know the answer to that against Spurs because QPR were 1-0 up after 25 minutes and they defended much deeper from that point on. There are two solutions to this kind of pressing -- (1) pass better or (2) pass long (with some accuracy). On our day, Chelsea is capable of doing either of these.

Bobby Zamora has started as the lone striker in the last three league games for the Hoops. As their target man, Zamora tries to get on the end of long balls from the back and holds the ball up as the rest of the team -- attacking midfielders and wingers -- join the attack. He did that job brilliantly against Arsenal -- a game QPR won 2-1. He was less successful against Spurs but that has more to do with his team seeing much of the ball after Taarabt's goal. Their main distributor from the back is the keeper Kenny but Ferdinand does some passing from his defensive area too. Zamora, however, is not the only target. A number of QPR's distribution from the back went to their wingers Taarabt and Mackie too. In fact, the combination between the ball out to the wide area and Zamora's hold up play led to QPR's game-winning goal. 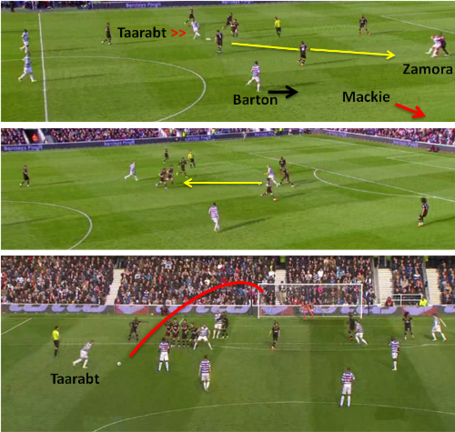 Taarabt controlled a long ball in his wide left position and dribbled forward before finding Zamora who received the pass under great pressure from Ledley King. Zamora returned the ball to Taarabt who was then brought down by Sandro. Referee awarded a freekick and Taarabt scored with a dipping shot into the corner. Also, note their attacking shape with Taarabt, Barton and Mackie slightly behind Zamora.

The good news for Chelsea is that Taarabt got sent off later in the game and will not be available for the trip to Stamford Bridge (ex-Chelsea SWP might get a shot on the flank in his place). But the not-so-good news is that Chelsea only has one true central defender -- John Terry -- to deal with Zamora's physical presence. Personally, I would Oriol Romeu who has played as center-back before to line up along side Terry. Winning the first ball against Zamora will be ideal but if not, the midfield has to chip in -- closing down options for lay-offs from Zamora. 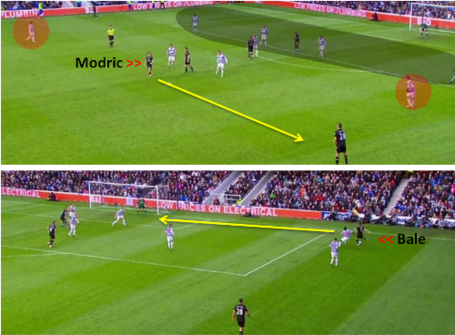 QPR's defensive shape after their goal is very similar to Chelsea's defensive shape against Barcelona -- a defensive 4-5-1 with three central midfielders sitting in front of the back four while wingers dropped deep. They allowed Spurs to have the ball and concentrated on keeping a compact shape. So it shouldn't come as a surprise when I tell you that Spurs made more successful passes in the first 30 minutes of this game (196) than QPR did during the entire game (194).

As we did against Barcelona, QPR crowded the central area forcing Spurs to go out wide. This was an effective way of defending against Spurs because there was no much height in the box. For instance, in the scenario shown in the above picture, the three Tottenham players in the QPR box as Bale made the cross were Defoe, Van der Vaart and Lennon. Either Hill or Ferdinand easily cleared the crosses with a yawn. When put on repeat for about an hour, you get the charts below. 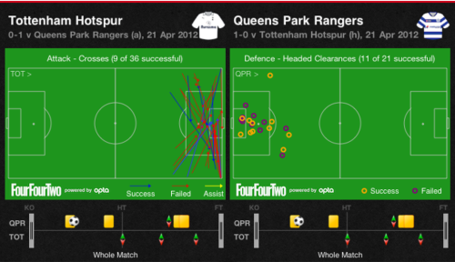 Tottenham made a total of 36 crosses (some were from corners) and only 9 were successful. On the other hand, QPR made a total of 21 Headed Clearances. It doesn't matter if these headers are successful or not because in all 21 cases the head that touched the ball first when the cross came in belong to a QPR player.

In the past three games, Chelsea has been playing very defensively; they had to. But it will be a different story against QPR. We will probably see Di Matteo going back to the attacking 4-2-3-1 with Mata operating behind the striker. If we can find the break through down the center (like the Drogba goal against Stoke), good. If not, I think Chelsea are better equipped than Spurs to attack the crosses with the likes of Torres, Kalou and Sturridge* running into the danger area, provided, of course, that we can make decent crosses in the first place.

* Here, I am assuming that Drogba and Ramires get a deserved rest but I could be wrong. 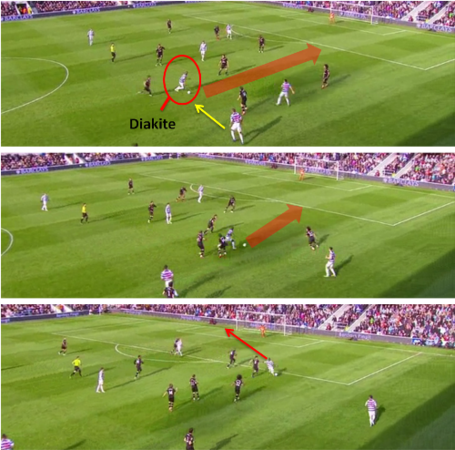 I was pretty impressed with Samda Diakite in this game. He was very energetic in midfield and not afraid to make forward runs (he scored against Arsenal from one of those runs). He started on the left side of QPR's midfield triangle and took turns with Barton in charging forward. He has the pace and the skills to go on long dribbles and he caught Spurs defense by surprise on a couple of occasions. Early in the first half (shown in picture above), he picked up a ball half way inside Spurs half and just made a straight run toward the goal through 4 Spurs players who weren't expecting that kind of a run. His shot was off target but it was still a dangerous run. He did the same thing in the second half too. It will be crucial for Chelsea midfielders and defenders to be aware of Diakite's tendency to make those kind of runs.

According to reports, Diakite is a doubt for this game. Apparently, he's been sick with a virus all week. So, if he doesn't play on Sunday, just forget about this part of the report.

In recent weeks, QPR has beaten Liverpool (3-2), Arsenal (2-1), Swansea (3-0) and Tottenham (1-0). These are big results against good oppositions and their fight to stay in the Premier League has gotten a boost. But all those victories came at Loftus Road. How have they done in their travels? Well, let's just say not too good. The Hoops have come away with zero points in their last five away games -- Blackburn (3-2), Bolton (2-1), Sunderland (3-1), Man United (2-0) and West Brom (1-0). The point is that despite their good form at home, they are there for the taking on the road. So... let's do this!