Share All sharing options for: UEFA says Terry will be allowed to lift CL Trophy should Chelsea win

The idiocy of John Terry, it's not something we've yet discussed around these parts. Neither have we got around to recapping one of the greatest nights in Chelsea history. It's not because we couldn't be bothered; more like, we haven't had the time, what with me slammed at the office and Devin trying to shake off an illness (get better, trick). 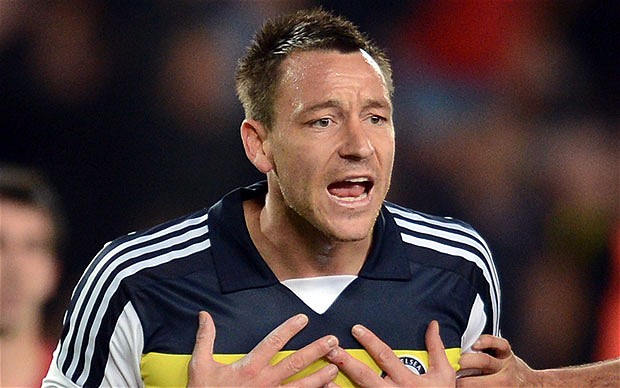 What were you thinking?

However, I felt we needed to get this news out there and see how people are feeling about it. Today, UEFA announced that Terry will indeed be allowed to lift the Champions League trophy should Chelsea go on to defeat Bayern Munich on 19 May. This is contradictory to several reports yesterday that said a rule was in place preventing such a move.

I guess that's good news for Terry, who is probably, knowing him, still grief-stricken over his baffling decision to knee Alexis Sanchez in the back during the first half of Tuesday's 2-2 draw with Barcelona at the Camp Nou. For all his flaws, of which there are many, he is after all a club-first guy.

Nevertheless, I'm still not sure I want him hoisting the rabbit ears if we win this thing. He put himself in this position (to miss the final) and has only himself to blame for that. With that being said, I think he should turn over that prestigious responsibility to the acting captain on the day, likely Frank Lampard. Really, though, I could care less who lifts the damn thing as long as we win. That's just my two cents.