We have a date with Bayern, in Germany

Share All sharing options for: We have a date with Bayern, in Germany

The final is set. The Germans, doing what they do in penalty shootouts, secured their place alongside our lads in club football's centerpiece fixture on May 19. 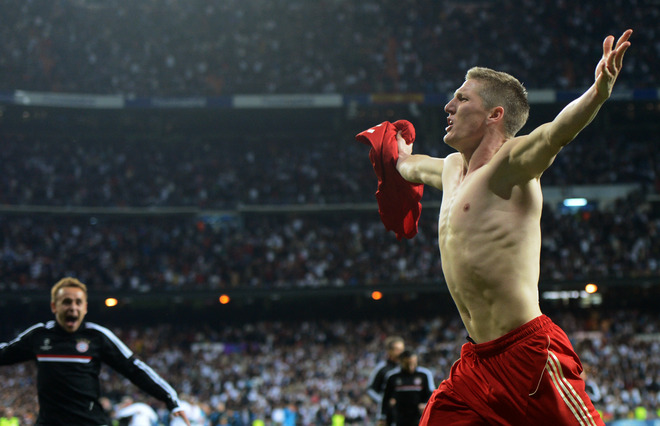 I trust you were watching that match. If not, what's wrong with you? It was pulsating at times, cagey at others, but overall, it was nerve-wracking. Perhaps not as much as our triumph yesterday (be fair, what is?) but it was a worthy follow-up. Those were, it must be said, two fantastic semifinals.

Real Madrid - check that, Cristiano Ronaldo - scored twice inside 20 minutes to put the hosts in a wonderful position, a position they somehow failed to hold. Bayern, displaying an unwavering balance, responded incredibly well and closed the first half the better of the two sides, a fact cemented when Arjen Robben converted a penalty on 27 minutes. That left the tie at 3-3  on aggregate.

Of course, nobody expected the match, as breathless as the opening half was, to go to extra time let alone penalties. But it did. And it did.

Oh penalties, how I have not missed you. This shootout was utter insanity, with both Iker Casillas and Manuel Neuer (twice) coming up with saves. The magnum opus, however, was reserved for Sergio Ramos who rocketed his effort into orbit. Couldn't have happened to a nicer guy.

Ramos' miss left the tie at the foot of Bastian Schweinsteiger, who delivered with lethal coolness to book Bayern's place in the finale at their own Allianz Arena.

The pseudo-hosts, like Chelsea, will be missing some key pieces - left-back David Alaba, central defender Holger Badstuber and midfielder Luiz Gustavo all picked up yellow cards on Wednesday and are suspended for the final.

Now, moving on to more important matters. How is everyone feeling about this matchup? I think, regardless of the outcome, we're in for a fabulous day of football.  Bring on May 19, trick.