The key to an early goal against Barcelona

Share All sharing options for: The key to an early goal against Barcelona

As you can see, I think we all pretty much no what to expect from Chelsea in today's game. With a 1 goal lead and having kept a clean sheet at home, Chelsea FC will almost certainly look to book a place in the Champions League final by playing "anti-football". It's funny though, that when executed properly "anti-football" usually leads to quite a few exciting counter attacking opportunities. We saw this last Wednesday and it led to the only goal of the game, and were almost certain to have these same types of opportunities should we so choose today. Let's take a look at a pair of counters in the opening minutes of last weeks game for a blueprint of what to watch for today. One will be a bit of a patient buildup (comparatively), and one will be a lightning counter (such as the one that led to the goal).

Just minutes into the contest Didier Drogba managed to get free on goal from a Petr Cech longball. Chelsea nipped possession off of Barca and then proceeded to pass the ball around the back as they set up their shape. They then passed it back to Petr Cech who immediately bypassed the buildup and launched a ball over the top for a rampaging Drogba. An overhead of the buildup can be seen after the jump... 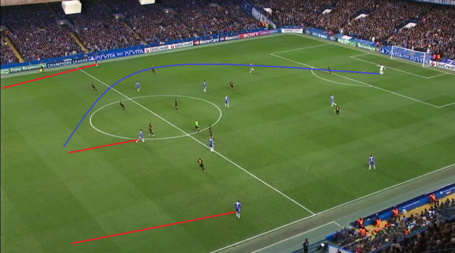 As you can see, Chelsea look well organized for a quick counter attack. Barca are closing down tightly, leaving Cech with two excellent options. Ashley Cole is alone in acres of space should Cech not want to play the run of Drogba, and Chelsea look primed to make hard runs on net should Cech go over the top. Cech does, and only a poor touch from Drogba kept Chelsea off the board just minutes into this one. Barca's back line aren't particularly fast, so we should be able to exploit this yet again this afternoon.

Now we'll turn our attention to an episode just moment later. Barca were passing the ball around the midfield, slowly building into their attack. Sergio Biscuits tried a through ball to an onrushing Messi, but John Terry read it perfectly. 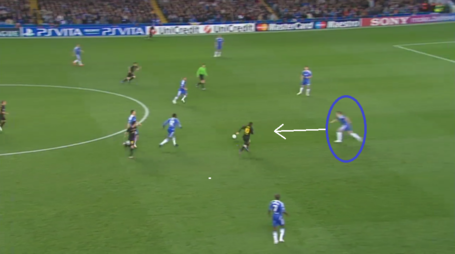 You can see that Terry is at worst going to foul Messi and stop the run, and best case is a turnover. What's also worth noting here is that Ashley Cole is doing an excellent job in covering the Terry challenge. 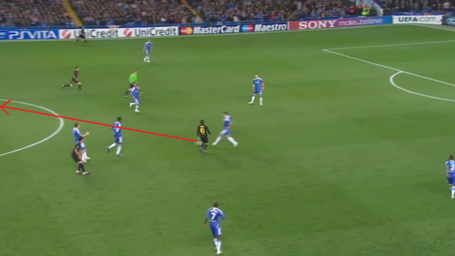 Terry will beat Messi to the ball and immediately look to start the break by playing a ball to the Drogbazooka (just out of the frame). This is going to allow him to run at the centerback pairing that Barca put out there, and with Ramires on the wing he ought to soon have company on the counter. 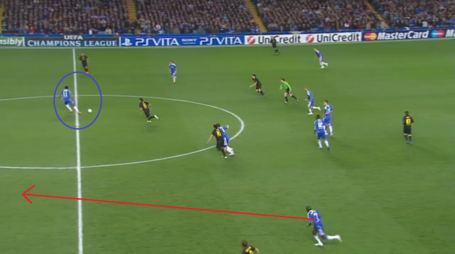 Puyol did an excellent job defending this break, but a little slip or wrong turn and we're again looking at a one on one with Victor Valdes. These were two excellent opportunities just minutes into the first leg that both could have led to Chelsea goals.

However you define possession, Barca will most certainly have more of it today. That doesn't mean we won't have excellent chances, and the more Barca have to press forward, the more of these lanes for the lightning counter will open up. Chelsea have scored first in every Champions League game this season, and this could easily be the 12th such time this occurs if Barca allow themselves to be sucked forward too far. This should be fun...Let's Go Blues!