The circus that is our season continues with a quick trip across city lines into enemy territory. Up next, a delightful encounter with those Arsenal chaps. More, after the jump: 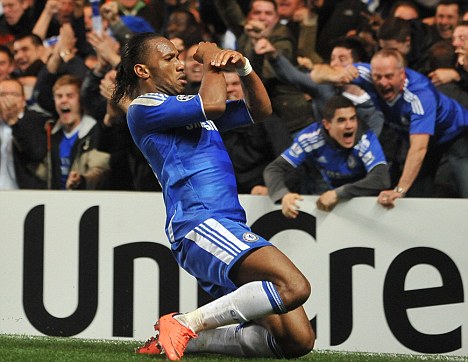 I hurt my knee doing this- my bad

It would be easy to live in the afterglow of our Barcelona triumph. It really would. Two gigantic wins on the trot and everyone in Blue will agree we're feeling pretty good about ourselves. In fairness, we've hit a level of excellence at the moment (tempered only by our own inconsistency in late game situations). But we're doing fine right now, which is precisely why tomorrow's match represents another monumental litmus test for determining how the end of this season plays out. Barcelona lie in wait for Tuesday's encounter, but before we can commence preparations, we've got the small matter of dealing a blow to Arsenal's third-place hopes. Mind, we've also got to shore up our desire for fourth. A lot, I mean it, a lot is at stake here in the home stretch. On to the specifics:

Why: As stated above, there are, including tomorrow, five league matches remaining on our schedule. Arsenal's recent loss of form (dropping points to QPR and Wigan) have left them seven points above us in third place, but we have a game in hand. A win tomorrow brings the gap to four points- fighting distance. In short, we need a maximum haul of points as we close the campaign on a high note. Newcastle and Tottenham will continue to scrap for CL footy, and the fight for fourth has no shortage of suitors. The key for us is to continue this run of excellence so we take ourselves to the Camp Nou on a high note. A letdown tomorrow would damage our confidence and put us in, what I believe, is a negative and concerned frame of mind for Tuesday. Purely in terms of the PL, this is a must win fixture. A win tomorrow all but ensures the greatest week in club history is secured (Tottenham, Barcelona, Arsenal). Plus, it's the London derby. And I fucking hate Wenger.

Last Time: You'll recall we played Arsenal early in the season at The Bridge, in what can only be described as a bizarre encounter. Back then, Andre was running the show, and despite jumping to an early lead, we eventually capitulated in truly dismal fashion. Their wingers were able to get behind our "high-line" (remember that shit?) and cause all sorts of havoc. Also, I recall a delightful Juan Mata screamer from 30 yards out with his left foot. Just an absolute peach of a finish. But the game will ultimately be remembered by our shit-tastic defending. Andre didn't seem to mind the scoreline, but those of us watching the 5-3 finish will remember it as being both strange, disappointing, and deflating.

Them: Not exactly in the best of form at the moment, Arsenal are entering this match with plenty of verve to get a result. Successive losses to QPR and Wigan, the latter being the more painful of encounters, has firmly placed the burden of gaining a result squarely on Wenger & Company's shoulders. Recent injury news has confirmed that the mystery healing powers of Jack Wilshere have failed to matriculate, while Mikel Arteta also has been ruled out for the rest of the season. Elsewhere, Yossi Benayoun is ineligible to play as he's currently on our payroll. Returning for tomorrow are Laurent Koscielny, Abou Diaby, and Francis Coquelin. Beyond those who can't lace them up, there's that Robin van Persie character who should be in the lineup tomorrow. Somebody, anybody, please but a body on him. He's not just in great form, he's been absolutely scintillating this year. Before Monday's loss to Wigan, Arsenal had won five on the trot at home in the League. But, temper that fact with the knowledge that Wenger's men have dropped two of their last four PL matches. So, they're not exactly firing on all cylinders at the moment. Having this match sandwiched between Barcelona matches may well be a blessing for our lot. I'll expound on that in detail when we get to our section.

I don't want to dive into Arsenal's tactics as I'm saving my sanity for the upcoming Barca dossier. But I'll add that there exist some striking parallels between Arsenal's pass-first style and Barcelona's pass-happy mechanism. But you can stop the parallels at that point. There's no way to put these two clubs in the same class. There are things Barcelona do that no club in the world can accomplish. Leave it to former Gunner Cesc Fabregas to expound on the situation:

I feel I know more about what my position is now than I did at Arsenal - at Arsenal I was tactically not very good at all. I did whatever I wanted. Now I have to think more about the team tactically. Before I was going up and down and sometimes a little bit lost in the important moment because I wanted to do everything. Now, my team-mates are more experienced than me and I trust them - they have told me to be calm, to stay in my position.

Talk about rubbing salt in the wounds.

Us: Out of contention for tomorrow are Didier Drogba (knee) and David Luiz (hamstring). It would appear that Didier's earned himself a rest for tomorrow, even though we all know him as the one who gives Arsenal fans nightmares. I would have loved to have his services for selection tomorrow, but it's simply not realistic for him to lace up the ole boots and get into the fray. Alas, it looks as though Fernando will get to deputize up front, in what will surely be a marquee matchup for him and a chance to further cement his recent stature as an improving performer. Plus, there's the added concern that Didier might well be unable to go on Tuesday, so, Fernando better be ready to get it going. Roberto might opt to rest a few key performers, likely Frank, Mikel, Ramires, and I wouldn't begrudge him in the slightest. Also, remember, Ivanovic remains suspended domestically for this bought - which means, yep, more Jose Bosingwa. To be rid of him this summer will be a true triumph.

We're a touch thin on the backline at the moment, therefore, it's unlikely John Terry will get a rest tomorrow. Certainly, Gary Cahill will be in the mix, as will Ashley Cole (who will be bracing for a frosty reception, as is the norm). The midfield should be rife with change, and there's a distinct possibility the Artist Formerly Known as The Bison gets the nod next to Raul. Up top, I'm sensing the return of Danny for this one on the wing, and Florent might well find a spot on the left side of the park. So, based on these general assumptions, I'm expecting that we'll line up as such: 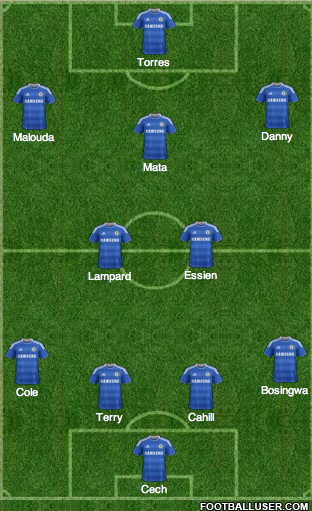 Experience in favor of rest. Ramires certainly deserves a break for his efforts (as does Lampard) but I'm putting him on the sheet simply because of his big-game experience. Besides, there's always the possibility to drop him off the park for Raul in the second 45. Mikel for a rest seeing as how he has his work cut out for him on Tuesday patrolling the middle of the park. Bosingwa returns to the right, Torres up top, Danny and Flo on the flanks. Though I could see Kalou get another nod on the left, I'd rather use him as a substitute for Juan in the second half (provided things are going in our direction).

It will come down, ultimately, to individual matchups. Gary Cahill on Robin Van Persie is one to watch no doubt, with RVP netting a hat trick the last time we met. His combination of power and speed was successful in marshaling the ever-so-complex Leo Messi on Wednesday. Does he have the requisite stuff to do it again? Again, this will be more about our ability to probe and convert on offense. We'll have to do better than we did against Barca in controlling the ball and dictating our style of play. Having Fernando up top flanked by Danny implies we will be well-served on the counter, but we cannot simply rely on that strategy if we're to prevail. The long-ball format tends to work when we utilize Didier's massive presence, but with Fernando in the mix, it appears we might opt for a less vertical more ground-based style. Whatever the case may be, I just want to see a comprehensive result that gets us three points and puts us in the right frame of mind heading into Tuesday.