Chelsea put four goals past Villa, giving me plenty of materials to work with for my usual goal analysis piece. But it was an close attempt from Juan Mata in the first half that totally grabbed my attention. After a couple of one-touch passes from Kalou and Torres, Mata was one-on-one with Shay Given; the Spaniard's curving left foot shot, not for the first time this season, agonizingly hit the far post. It was one of the best build-up play we have seen from the team this season; the quick passes and movements in a tight area were almost Barcelona-esque. So, I am not ready to just let it slip away from our memory like any other near-misses that we have had this season or any other season. The break down of this chance after the jump!

Creating and Utilizing A Defensive Gap 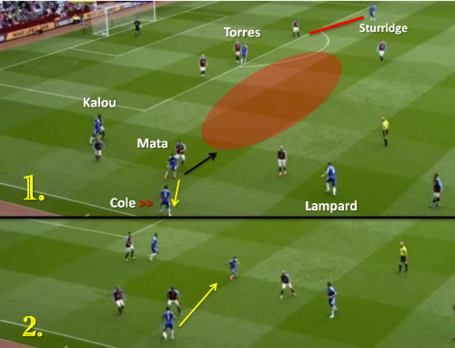 The build-up started around the 22nd minute of the game. Chelsea were already one goal up at this point. Mata was the trequartista of the day, playing just behind Fernando Torres, the main striker. Chelsea's front three, at this point, were in their respective positions: Kalou and Sturridge stretching the Villa defense from the wide areas while Torres remained very central. The Villans have 9 defenders dealing with Chelsea's 6 attackers in view. A very solid defensive set up but it only took a tiny Spanish man to unlock this defense.

Mata left his central role to get involved with the play on the left with Cole, creating a huge gap in front of the Villa defensive line. He, then, tapped a pass to Cole before slipping into that gap he had just created. Two Villa players got sucked into Cole, leaving Mata on his own to receive the return pass from the leftback. 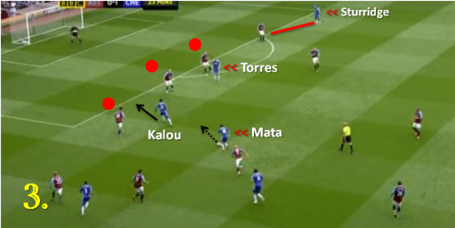 So what was a 9 v 6 situation quickly became a 3 v 3 situation with Kalou, Torres and Mata attacking the three Villa defenders on the left side. Ireland who was initially marking Lampard rushed back to help his defense but he never effectively dealt with Mata.

The Triangle Beats the Square 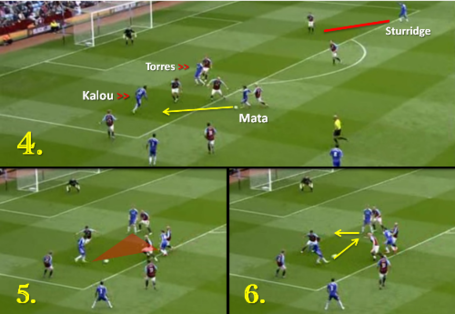 This was when the magic happened. Mata, Kalou and Torres formed a tight little triangle in the Villa box. Mata slipped the ball to Kalou and continued his run into the box; Kalou found Torres with the first-time pass; Torres laid the ball nicely into Mata's path with a slight touch; and Mata was through to face Given on his own. This was all carried out within a second or two. Speed and precision of these passes were obviously vital for the success of this attacking play, but, as with most art, simplicity is what makes this move stands out. There was no tricks or flicks. Only simple, uncomplicated passes. Great work from all three involved.

Sturridge didn't have much to do in this play but it should be noted that he stayed wide on the right side through out this build-up and his positioning kept Villa's Warnock occupied, effectively allowing Chelsea's attack to occurred solely on the left side. 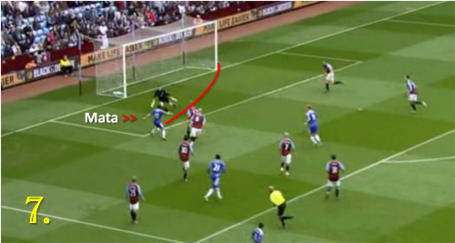 The build-up play was excellent. But even without the tiki-taka play, Mata's curving left foot shot could stand on its own as a very good finish... if it weren't denied by that adamant far post. This, of course, was not the first time the post had came between Mata and his adorable goal celebrations. By my calculation (which means I'm too lazy to check), the Spaniard has hit the post 4 times this season.

This is not the kind of stats you want one of your forwards to be associated with but it is not all doom and gloom. As we all know, shots that hit the goal frame one day will end up in the net on another. In fact, this season's top goalscorer Robin van Persie used to hit the woodwork with great regularity before his goal floodgates were blown wide open. We might have bought Mata to create chances, which he has done on plenty of occasions, but he has also been getting into great positions to finish them as well. With a little luck, we have a special player who can put up double figures in both assists and goals.