Share All sharing options for: Chelsea vs. Barcelona: Tactical Analysis

By now the dust has settled - although Dani Alves will probably never clean out the Brazilian dirt Ramires left all over him - on Chelsea's win over Barcelona, and attention now turns to the return leg at the Nou Camp next week. Barca will need to convert possession into penetration, while Chelsea will most likely to look to use the same tactics that were so effective tonight. So what were these tactics that managed to stifle Messi and co.? Let's have a look after the jump.

Roberto Di Matteo brought Raul Meireles into midfield, which saw Juan Mata shift out wide right and Ramires take up the same position he did in the second leg against Napoli. In the defensive four two changes were made as Gary Cahill and Branislav Ivanovic came in for the injured David Luiz and the terrible Jose Bosingwa respectively. Chelsea also more or less forgoed the 4-2-3-1 shape so favoured by their caretaker manager and went with a narrow 4-5-1, but more on that later.

Barcelona shaped up in what is recognised as their 'standard 4-3-3', although there were nuances as a result of individual styles: Fabregas pushed high and drifted across the pitch as the advanced midfielder of the trio, while Iniesta played an inside-left position on the flank while Sanchez stretched the play out wide right. Barca also made some changes to their defensive four as well, with Adriano as the left back the preferred option to Gerard Pique centrally.

Everyone knows that when you play Barca, your tactics are going to be all about what you do without the ball, because Barca monopolize possession to the point where counter attacking has become the only real outlet to goals. There have been a number of varied approaches to stopping the technical interplay of the midfield and attack, and they range from intense pressing high up the pitch, to man marking, to utilizing a 'medium block' - but the most common approach is the one used by Chelsea tonight, where you set up camp inside your defensive half and look to stifle the player in possession only when they approach the penalty box.

As a result, for most of the game, Chelsea's shape can be represented by the diagram on the left.

While a feature of Di Matteo's tenure has been the two banks of four in defence, the threat of Barcelona meant that Chelsea played with five across midfield, with Juan Mata and Ramires playing on the flank invert to their natural foot. The result of this was for both players to drift inside, and where this diminished Mata's threat it served to increase Ramires - the Brazilian is a shuttler, and was constantly making good runs in advanced positions when Chelsea regained the ball - most obviously for the goal. Dani Alves often leaves space in order to overlap the right winger, and this is normally accounted for by the movement of Pique into a wider position - with Javier Mascherano, an "outsider", playing centre back, Barca's defensive structure wasn't as coherent. 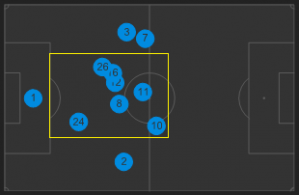 Meireles, Lampard and Mikel played central positions in midfield, and while on occasion they did pick up a Barca player, on the whole they were happy to retain their shape in midfield and narrow the space between the lines. Lampard in particular was key to this - he was constantly pointing at positions for his teammates to take up, and was able to press forward to heckle the ball carrier - as predicated by the player himself before the game.

When Barca could in get a player on the ball between the midfield five and back four, they were at their most dangerous. Chelsea's job was made easier when Messi dropped deeper - they could squeeze the Argentinian's space and stop him running with the ball. When the midfield got caught too high up, or when one of the front three dispossessed a Chelsea player, Terry and Cahill were at their most vulnerable. Particularly in the first half the English duo were a fair distance from each other, making it harder for the two to cover the gaps for Barca to thread balls through. Immediately after the break they narrowed the distance, and they looked more comfortable.

Furthermore, the role of Mikel was important in Chelsea's game plan.

While the Nigerian is often played as a singular holder between Chelsea's own lines of midfield and defence, here he was more like a central midfielder, particularly when Xavi picked up the ball. He would charge forward and close down the space, and he was well covered by Lampard whenever he did so. As mentioned before, Chelsea weren't man marking, but broadly speaking each player kept an eye on a certain opponent - for example, Meireles was often hounding Messi, but when Fabregas advanced into his zone, he tracked the ex-Arsenal player's run as well.

The result of this positioning was that Barca were faced with a wall of blue shirts, and were tasked with the goal of breaking it down.

By contrast Barca approach games by thinking about how they are going to break teams down. They often solve this problem through intelligent combinations and overloading certain zones of the pitch, but they weren't able to do it often enough tonight. Chelsea were forcing them wide, and the lack of natural wingers - Sanchez has been used as a central forward more than anything for Barcelona - meant they wanted to play through the middle.

The intelligent Iniesta recognised this, and made obvious attempts to maintain a wide outlet for his teammates on the left touchline. It was unusual then, for his best play of the game to be when he came inside, taking advantage of Chelsea's vulnerable right back. A flurry of late, crucial goals recently has disguised the poor defensive play of Branislav Ivanovic on Chelsea's right hand side. Recently the Serbian has been caught out in possession high up the pitch, when he is taken a run forward - Napoli exploited this excellently when at home in the first leg. Furthermore, lately Ivanovic has struggled in dealing with his opponent - against Aston Villa, when Marc Albrighton was substituted on, Ivanovic didn't know whether to show him down the line, stand off him, or stay tight to him. It was more or less the same situation here, yet Andres Iniesta is a far more talented player. It was strange then, that Adriano did not overlap down the flank more - when he did, Barca hit the post. Guardiola was probably afraid of leaving his three man defence another man short, but Dani Alves was being marshaled well by Cole on the right, so it was strange that Barca didn't change the angle of their attacks.

Guardiola did attempt to add more wide players on the pitch - first, by introducing Pedro, and then Cuenca, both players who are disciplined enough to stay wide and add an extra option. By then, however, Chelsea were more or less comfortable in their shape, and the resulting crosses from those players were easily handled by the aerial presence of Cahill and Terry. Roberto Di Matteo did recognize this extra threat however, and looked to reinforce his wide players as a result - first with Salomon Kalou, and then Jose Bosingwa. While Kalou offered the also obvious option of fresh legs on the counter attack, the Bosingwa substitution was a little more confusing. Di Matteo may have been thinking of the infamous second leg against Napoli, when he turned to the Portugese rather than Gary Cahill to replace John Terry, in order to place a more fresh player up against a new wide threat.

Defensively, Barca didn't have much to worry about, but they were concerned about the aerial threat of Didier Drogba. With Chelsea's speedy players, Mata and Ramires, playing so deeply, Barcelona could afford to push high up the pitch and force Drogba away from goal. This meant the Ivorian was caught offside five times, and when the ball was played in the air, a combination of Puyol, Mascherano and Busquets looked to surround Drogba; more or less the same tactic Chelsea adopted when Lionel Messi picked up the ball in threatening positions.

Had Chelsea not scored through Didier Drogba, by exploiting the obvious weakness in the Barca side - and much credit must go to Frank Lampard for immediately searching out for Ramires after gaining possession - this tie would be much different. The goal allowed Chelsea to remain as they were, and shelter the storm. Next week presents a more challenging task, due to the nature of the Nou Camp pitch, which is three metres wider than Stamford Bridge. Crosses aren't necessarily the answer for Barcelona, but simply more avenues for attack are required as to test Chelsea's structure.

Chelsea will take heart from the goal and the clean sheet, although Di Matteo might consider a change in the wide right position and up front: Torres pace could come in handy as always, and Juan Mata was largely wasted on the right wing. Questions, questions for both Chelsea and Barcelona, although Di Matteo will be relieved that his side could answer some of them already.

'The balance has to be good within the team, it's not just the defenders who defend, it's the whole team. You need to be able to close down the spaces as much as possible and limit their threat, but ultimately, with the ability of some of their individual players they will create problems. It wasn't just our defenders, it was a collective effort'