CL Recap: Chelsea Hold On To Claim First Round Knockout

Share All sharing options for: CL Recap: Chelsea Hold On To Claim First Round Knockout

By the skin of our teeth, we're walking away victorious. More, after the jump: 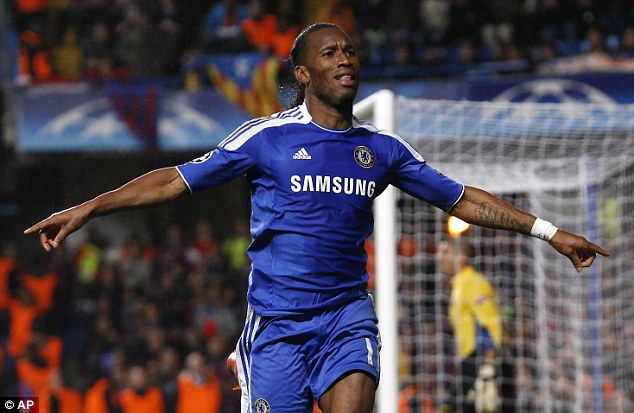 Just like that, we're heading to Spain with a 1-0 lead. Yeah, that actually happened. If you witnessed the match, you might have lost your mind. Barcelona did precisely what they came to accomplish- they knocked it about, made our defense chase the triangles, and altogether dominated the ball for extended stretches. But, for all that beauty and precision, there was nothing that could get past the defensive wall, and ultimately, nothing that could get past our beloved Petr. A match of this magnitude required a comprehensive display on both sides of the park. To win, Chelsea needed steel, determination, power, and poise. In that vein, players old and new stepped to the forefront to provide displays of aggression and grit. There was Ashley Cole dialing back the clock and demonstrating that his best days are still around, clearing off the line and causing a ruckus for Dani Alves. There was newcomer Gary Cahill getting stuck in and battling with Leo Messi to clear his lines. There was Frank Lampard serving and disrupting in the middle of the park. There was Didier Drogba, who flopped about and rolled across the pitch until one clairvoyant moment would arrive in the form of a brilliant finish. History suggests that, after this success, the tie is firmly in our hands for the taking (Barcelona have never won a semi-final tie after losing the first leg in the CL). But I would strongly advise getting carried away just yet. There's plenty of work to do still and enough evidence on display to suggest we have vast areas of improvement. But for a full 90 minutes, Chelsea did the job that was required.

It was, by no means, pretty. If you looked at the stats only, you'd automatically assume that Barcelona were the eventual victors. But despite owning the ball, taking almost 20 shots, and pressing Chelsea off the ball throughout the evening, we somehow made it through with the victory. In our limited capacity of 23-25% possession, and 4 shots with one on target, we made our chance count. The goal, arriving just on the stroke of halftime, came in the wake of a miscue from that diminutive Argentine, with Frank swiping the ball off his feet and delivering a beauty of a long pass to release Ramires, who ran all night mind, and blasted a low cross across the face of goal to find the on-rushing foot of The Mighty One. Goal. Just like that, momentum was ours, and the dynamic of the match had vastly adjusted heading into the second 45. Our sole true chance of the first half, and we made it count in spades. Meanwhile, Barcelona had their share of gilt-edged chances in and around the area. There was a beauty of an over-head pass to Alexis Sanchez that he did well to chip over Cech- only for it to hit the upright. There was a lovely one-two combination that found the foot of Messi, only for it to get blocked by John. There was Iniesta dancing across the touch and beating a step on Gary, only for him to get tugged down and cleared out of play. There was a lovely over-head pass to release Cesc, only for Ashley Cole to clear the shot off the line with reckless abandon. For every inch that appeared on the pitch, there was a blue shirt quickly advancing to close down space. It wasn't perfect, for sure. But it was beyond effective for the first 45.

Surprising for this match to many was the inclusion of Raul Meireles in the side in favor of Kalou. But, I believe the evidence is there to suggest Roberto got this one right. His involvement was purely to stay attached to Messi and double-back on defense to steady the left-side and prevent the floodgates from flying open each time Sanchez found himself with the ball at his feet. Where it worked on offense for Chelsea, and granted it really never got to be on display considering we never had the ball, was via set-pieces, long throw-ins, and using our superior height advantage. Barcelona simply had no answer for our size in the box, and it's certainly a strategy that bears repeating in a weeks time. That Barcelona weathered the storm says more about their offense and less about their defense, to be fair. They didn't just dominate the ball, rather, they held it in their arms and cradled it to sleep. Stalwarts like Juan Mata, whose game is so central to possession, were left on the sidelines for long stretches and could never really gain influence onto the proceedings. But it worked out- somehow. In the midst of the madness, the nail-biting and stress-inducing pauses of possession, we managed to see the result through. There was a peach of a last-gasp chance for Barcelona at the death to grab an equalizer, only for a shot to hit the post and the ensuing rebound to sky high into the Shed. Though it wasn't the best of matches, the result certainly swings the affair directly in our favor for what promises to be a tantalizing return leg in Barcelona next Tuesday.

That's all I got for now friends. Massive result. As always, we'll have more to share as the week unfolds.