Frank Lampard, Ramires, and the art of countering Barcelona

Share All sharing options for: Frank Lampard, Ramires, and the art of countering Barcelona

Just to remind everybody, Chelsea defeated Barcelona at home by a 1-0 scoreline today. It's the same tactics we've used effectively against the Catalan giants in the past, so it should come as no surprise that we sat back, defended, and then looked to beat them on the counter. We haven't been as effective attacking with the counter this season as in years past, but today it really did look like we were very dangerous on the break. After the jump we'll take a look at the goal and how exactly it happened.

As most of you are aware by now, the goal was a takeaway by Lampard, a long ball to Ramires, and a cross to Drogba. All three played critical roles in the abbreviated buildup to this one as we'll show you in picture form. Here's the screen as Lampard initially takes the ball from some guy named Messi: 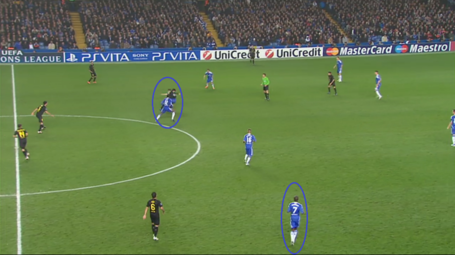 As you can see, Ramires, Mikel, and Meireles are in a nice defensive band. Drogba is just off screen all alone as he was for most of the night. Lampard has to make a decision quickly if he wants to start the break, either lob it to the big guy or find another target. 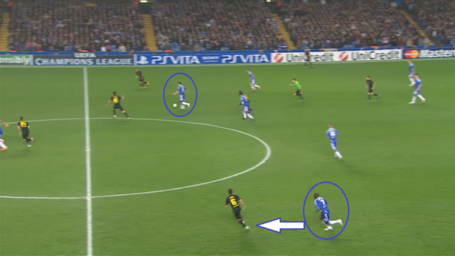 Ramires reacts well to the turnover and immediately begins to make a run to provide width. He's drifting to the left of the defender to force that player to go wide with him, and with his speed he's likely to outrun any player on the Barca side to a long ball from that position. Frank never turned to look at him, meaning the squad did a nice job of communicating this and they were working on this type of counter in training 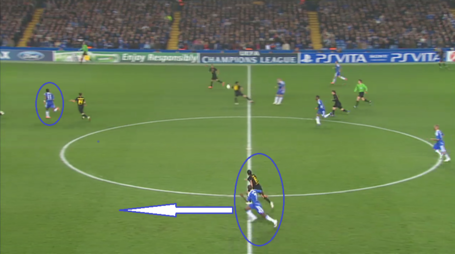 Now the ball is in the air. As you can see, Ramires is going to beat his defender to any decent ball. Drogba also does great work here in making his run away from Ramires and taking the "defense" with him. This leaves Ramires acres of space if his first touch is good. 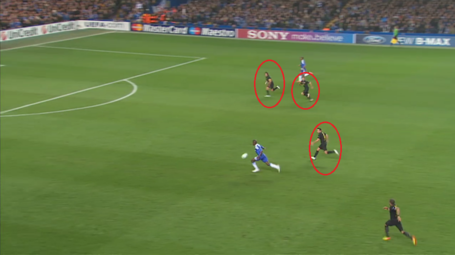 Ramires takes a hard first touch, but with the space his speed has created and the run of Drogba that pulled the other defenders he'll have more than enough time to get control of the ball. While his poorish first touch probably forced him to look to pass instead of shoot, the quick reactions of Lampard and Ramires to the turnover highlight the fact that this was an area Di Matteo felt we could exploit in this contest. I don't know if any of you have seen this yet, but here's how the play ended...

Chelsea 1-0 heading to Spain. Soak it up, it will be a fun week.