"How do you beat Barcelona?"

It's kind of a silly question, but I guess it's an obvious one to ask. It's silly because nobody's figured it out yet - Inter Milan came pretty close, but Jose Mourinho's formula hasn't applied to the eight million Clasicos we've seen in the past couple of years. Since Mourinho's a lot more knowledgeable about football than I am, there's no way I should be reasonably expected to come up with an answer to this question. But I'm getting asked anyway. Here goes.

"How do you beat Barcelona?"

My initial response to this question was to find the genome sequence of Ebola or some equivalent hemorrhaegic virus and then post it here, but that plan was thwarted by the realisation that I'd rather not get any more calls from the CIA or MI6 or get blamed for a major biowarfare attack again. So nevermind that.

And stop asking me. I simply don't know. There's no good answer, and there's not even a particularly fun/crazy answer if we restrict ourselves to the 4-2-3-1 that Roberto di Matteo's likely to implement. But let's explore some possibilities. First, a little bit about the team itself.

Barcelona are generally considered the archetypical possession footballing side, which sometimes strikes me as a little bit silly. There was certainly possession football before Pep Guardiola's Barcelona, and it was nothing like this. It wouldn't be totally absurd to describe what they do as anti-football, because football is supposed to have an opposition. Barcelona do their best to play without an opponent. They have the ball, and by God they're going to continue to have the [sheep] out of that ball.

The fetishisation of possession makes a certain kind of perverse sense. Whichever team has the ball is always far more likely to score in that sequence of play than the team without the ball. Barcelona have taken that idea to its logical conclusion, which involves nobody having the ball except Barcelona, thereby winning games. It's a little bit like an misguided, crazy scientist proposing to end suffering by destroying the entire universe.

In normal football, you make certain sacrifices to get into scoring positions, such as defensive solidarity if you're a traditional possession team (Arsenal) or possession if you're a counterattacking side (Napoli). Fortunately, Barcelona aren't quite good enough - yet- at destroying any pretense to a football match not to give something away when they build up their attacks, and that's their positioning.

As Pep Guardiola has said, frequently, Barcelona are a horrible team without the ball. It's relatively easy to catch them with both fullbacks up the pitch and only three players deep, and while their centre backs (and Sergio Busquets) are solid defensive players they're not world-beaters. It's this weakness that has led to Barcelona shipping 16 goals on the road in La Liga this season, and it's one of the reasons Salomon Kalou declared, to some amusement, that Barcelona have targetable flaws.

The problem is that it's quite difficult to keep the ball for very long once Barcelona lose it. Simon Kuper, whose surname totally doesn't have an 'i', explained their mechanism for retrieving possession as having three basic steps:

If that doesn't work within five seconds (and usually, it does, especially because teams playing against Barcelona have to put so much effort into retrieving the ball that they're both tired and flustered whenever they do win it back), the Catalans drop into a traditional defensive shell, which is little more than competent. Barcelona's defensive record is entirely a function of retaining the ball.

Can Chelsea exploit this? If so, how?

The first thing to do is to consider the typical shape of a Barcelona attack. We'll ignore the possibility of Guardiola putting his side in a 3-4-3, because that would be a weird thing to do against a 4-2-3-1, and just look at the 'usual' Barcelona 4-3-3. 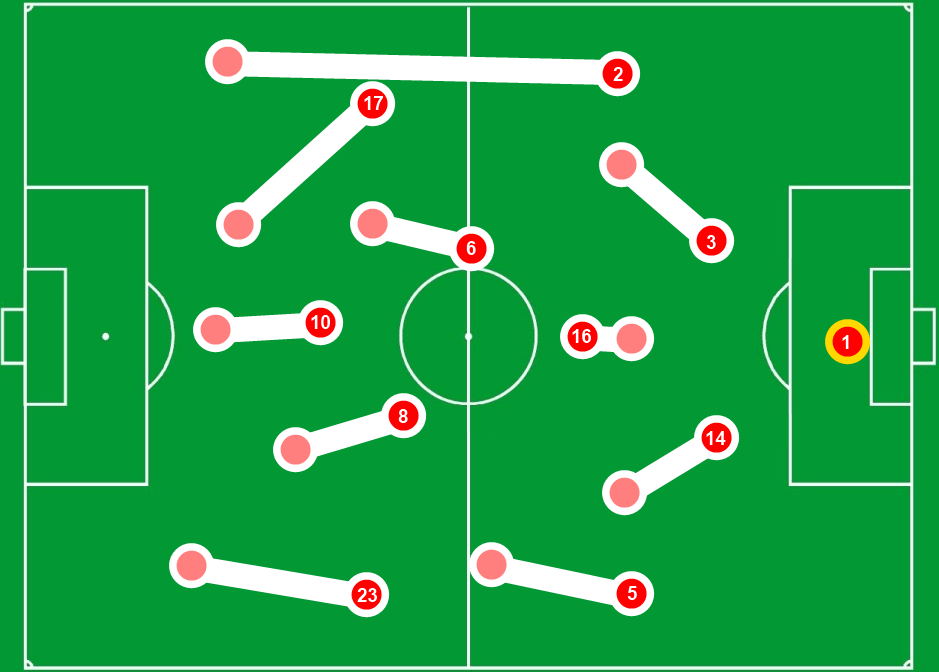 See anything interesting there? For me, the most interesting thing is the positioning of the right back, Dani Alves. He seems to be pathologically incapable of not attacking, and although they'll develop their left back (expect Carles Puyol there) during long passages of play, Alves will storm down the right flank basically at will. This is a good thing for Barcelona's attack, allowing them a dangerous out ball and stretching the opposition defence, but it also provides a huge gap in the back line that should be exploitable with enough speed. Catch Alves out, and things look pretty positive.

You might be familiar with the idea of splitting up the centre backs and dropping the holding midfielder into a back three while on the attack, because it was a favourite tactic of Andre Villas-Boas. It's a useful way of putting the fullbacks into play as legitimate attacking threats, but we should be very familiar with the consequences as well, namely that it puts the onus on individual players not to make mistakes. That's unlikely to happen with Puyol or Sergio Busquets (who is a splendid footballer despite the myriad faults in his character), but Gerard Pique and Javier Mascherano are a different story. Both are good enough, but neither is immune to making trivial errors, and if Chelsea can isolate a player against them and beat them, they'll be in very good shape.

When I looked at Napoli a few months ago, I studied their attacking patterns to see what Chelsea could do to stop them. You can't do that with Barcelona. Their players are intelligent enough to improvise and move around enough that you'd probably have to turn to chaos theory in order to make any sense of it, and even Mitchell Feigenbaum would have trouble with their more intricate combinations. Instead of completely shutting down the Barcelona attack, it probably makes more sense to consider the zones of the half that Chelsea should be most focused on defending, and which they should be willing to give up.

Levante gave us an idea of what to do in their 2-1 loss to Barca this weekend, pushing their guests out to the flank and inviting crosses. Since Barcelona are a team that Juan Mata would tower over, this obviously didn't bring them much joy, and they're hardly going to be more successful in winning aerial battles against John Terry and Gary Cahill than they were against Gustavo Cabral and Sergio Ballesteros.

The centre should be locked down as tightly as possible, especially in the final third. Barcelona are essentially harmless as long as they're 35 yards away from goal, a fact that Mourinho noted during his famous victory over them as Inter Milan manager - note the organisation of Inter's back line into two lines within thirty yards of their own goal whenever Barcelona got the ball in the second leg. Pressing them high up the pitch might earn a chance or two, but it's defensively suicidal, because it opens space between the lines in which Lionel Messi and Andres Iniesta can operate.

You'll notice that that's the first time I've mentioned Messi's name in this preview. The reason should be fairly obvious - he's beyond tactics entirely. I have no idea how to stop him when he's on, because he does things that shouldn't be physically possible. The answer is probably to foul him as much as you can without getting anyone sent off, but that's a pretty lame answer. The only Chelsea players I'd trust man-marking him at this point are David Luiz and Oriol Romeu, one of whom is injured and the other stuck firmly in the basket. Messi is impossible. Let's hope he has a bad day.

It makes sense for Chelsea to defend very deep with a bank of four and then either four or three ahead of them. The right midfielder will have less defensive work to do because he won't have to track Dani Alves, but the left is going have to work impossibly hard, because they'll be required to be both the person tracking Alves and the one exploiting the gaps he leaves. It's a similar problem to that posed by the sublimely underrated Christian Maggio at Napoli, and I imagine that Roberto di Matteo will turn to the same answer he did there: Ramires. And not just because Ramires injured Maggio in Chelsea's win, either.

It's a pretty obvious solution, because Ramries is disciplined, fast and fitter than pretty much everyone on the planet. The main worry would be about his availability for two tough matches against Barcelona and a must-win against Arsenal at the Emirates, but I'm going to ignore that problem because I'm too stupid to come up with a good solution. Anyway, Ramires at left wing. Sorted.

Skipping the rest of the team selection for now, because like a moron I completely failed to outline this post and thus it's organised like a Villas-Boas defence*, let's focus on the other way we can really hurt Barcelona: Set pieces.

Frankly, they're not very good at them. They score from them fairly routinely, but defenses in Spain are, in my estimation not particularly well equipped to deal with them in the first place, and Chelsea are, especially if all three of John Terry, Gary Cahill and Branislav Ivanovic are playing. On top of that, they're really not good at defending them. Barcelona have three players who can clear set pieces effectively - Puyol, Pique and Busquets. The response from Chelsea should be to have four who can score from them. We've got the defenders, so the last player into the mix should probably be Didier Drogba. Enough bodies in there and we'll do some damage.

In general, we should be looking to bypass midfield as much as humanly possible. There's no way we can contest Barcelona there, so we should use those players as defensively as possible and just pretend as though the whole zone doesn't exist on attack. Long passes to Drogba, layoffs to the wingers. It wouldn't be totally crazy to suggest that we should take a Stoke City-like approach to the game. Barcelona are the better side, so let's take advantage of what we do have and make life as difficult as possible for them.

If you've been following along, you'll note that I haven't touched who I'd use in the pivot, the 'hole' or on the right wing, so let's get to those now. I think Frank Lampard and John Obi Mikel did a good enough job on Sunday that thy should be in contention to start here, but this is probably a Michael Essien match rather than a Lampard one - let's save the latter's legs for Arsenal.

In the hole, I think Juan Mata would mostly be a passenger thanks to a combination of Sergio Busquets and Barcelona always having the ball. Mata's obviously a great passer and a fine player, but he gives you zero defensive ability and so we should be looking for another solution. As much as I hate to say this, that probably means Raul Meireles, who'll at least cause trouble for someone in the middle of the pitch. We can only pray it'd be Barcelona.

At right wing... well, it's Daniel Sturridge, of course. I don't really trust him to do very much on the big stage, but Chelsea are going to need to roll the dice here, and he's quick enough to cause Puyol and Mascherano some real problems if the Blues can get the counterattack going. Here's hoping.

So, my lineup for Wednesday's match:

General game plan is to turn the middle of the pitch into an absolute mess and look to break at speed down the wings. Yield the centre until the final third, at which point set up shot. Win fouls and corners. Don't get anyone sent off, but make sure Barcelona know they're playing in England. Profit.