Since our last encounter with Barcelona, our clubs have headed in very different directions. Theirs, has been on the ascendancy for what seems like four years running. Ours, has seen its fair share of ups and downs along the way. But our paths cross once again, in a semi-final tie no less- which ultimately presents yet another shot at redemption for a Chelsea side that's desperate to set the record straight. The memories of 2009 have dimmed, even if the scars it left behind continue to smart on contact. At stake, is the very real opportunity of taking the reigning Champions, the proverbial favorite, and the 'best team in the world' out of a competition they've bossed over the last five years. If there was ever a tie that could get us excited, this, my friends, is absolutely it. More, after the jump: 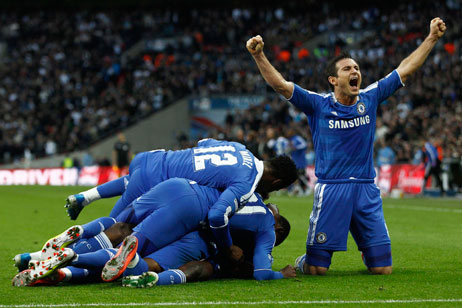 More of this please

A convergence of styles. Finesse and flair versus power and determination. It's rare that Chelsea would ever enter a tie as the under-dog, yet here we are and for good reason. Not one person outside of Cobham genuinely expects Chelsea to navigate this most treacherous of ties unscathed. Doing so, would be an incredible feat that would rank in the Pantheon of legendary successes for the club. Nevermind the final that would await, simply masterminding an aggregate victory over the Catalonians would be, in it's own right, astounding. For Roberto Di Matteo and company, that challenge will commence tomorrow evening in earnest. On to the specifics:

Why: Well, why the hell not? Because victory in this first leg is something that must be ascertained if we have any real shot of defeating them on aggregate. Because ensuring we walk away victorious tomorrow will continue to springboard our momentum heading into a weekend run-in with Arsenal, and a return leg showdown in Barcelona next week. Because Di Matteo needs another marquee win to cement his status as the incumbent-in-waiting for an official contract to run the side. Because this side, as creaky, fractured, and ultimately influential as it might be, is in the twilight of its time together. This could well be the last time the show comes to town before it's blown-up this summer. For a swan song, this one could be pretty damn epic.

Them: You know what you need to know by now. Leo Messi is on 62 goals in all competitions this year for Barcelona. That's not just staggering, that downright impossible. It's only tempered by the fact that arch-nemesis Cristiano Ronaldo is on 64 goals in all competitions for Real Madrid. Seriously, when they sit down and do an ESPN 30 For 30 documentary on this, I'll relish it for a lifetime. In Messi, Barcelona have one of the greatest players ever to lace them up- and he's not even into his true prime yet. He's not just good, or great, or magical. He's an unstoppable elf-like creature with uncanny balance, speed, and technical gifts that seems to drift into spaces you don't realize exist, and pillages the back of the net like Emile Heskey at a Hometown Buffet. In most cases when you're judging a match, you look at who the best player on the pitch is as ultimately, their quality will help decide the outcome. Messi does that- every single night it seems. Although, based on our past success against him (he's never scored against Chelsea in six tries) the evidence is there to suggest we may be able to weather the storm.

Barcelona have played somewhat of an unorthodox formation this season- in part to a glut of injuries that have hampered Pep Guardiola's ability to field his preferred squad, but also because they're a rather thin team in terms of superstar depth. Their first eleven are all standouts, but their bench is comprised primarily of home-grown studs that we've yet to see much of on the national stage (although you and I both know all these kids have quality for days). Still, Guardiola's new Barca have lined-up predominantly in a 3-4-3 with a glut of midfielders interchanging to cause nightmares for opposition defenses. It worked to great effect against AC Milan in the previous round, and only after securing safe passage did Barca switch back to a traditional 4-3-3. One of the most remarkable traits about Barcelona's style, disregarding the media's genuine obsession with tiki-taka football (it's basically possession football wherein there are triangles created everywhere so pressing defenses have to constantly rotate to the latest outlet), is the fact that they tend to play their style regardless of who the opponent might be. For a side of physically minute dwarfish players, Barcelona seem to have that trait of fearlessness mixed with genuine confidence that their style and ability will beat anyone. It's the sign of a genuine champion that they force opponents to adapt to their method rather than the alternative.

With respect to the 3-4-3, Pep's been using the following lineup to great effect over the past ten matches (which has seen them steal a beat on Real Madrid for the top spot in La Liga) 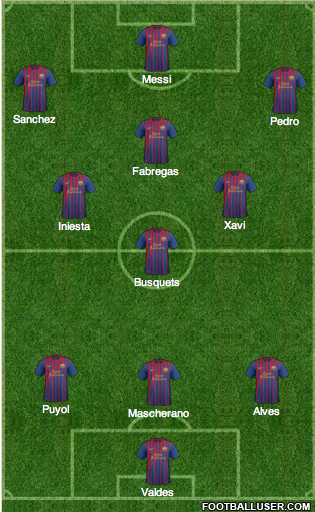 By his own account, Pep believes the most influential member of this side (in recent weeks) has been Javi Mascherano, who has been demoted from the holding midfield spot and placed into the heart of the Barca defense to shore up the gaps. It's a fluid side that has interchanging parts who can dovetail and adapt to counterattacking opportunities. Everyone knows their role, and it's fair to say that, despite the theatrics that some players tend to demonstrate, this is a very-well-drilled Barcelona side that understand their relative roles, and ultimately buy into the team philosophy that Pep preaches. But, I'll say it again, as great as they are on paper and even though they've played well this year, they have shown weaknesses that can be capitalized on if Chelsea diagram properly.

Us: The big news on the Chelsea front is the loss of David Luiz for what appears to be a fortnight. You'll recall he came up somewhat lame in the run-up to Gareth Bale's goal on the weekend, and immediately was withdrawn for examination. He's done his hamstring something bad, so he'll have to sit this one out (which would normally not be the worst of news but in this case can pose some problems). In his stead, Gary Cahill will step into what will without a doubt be the most massive game of his career. He showed some genuine grit and determination against Spurs on Sunday, so here's hoping he can continue forward with the same aplomb that was on display. Elsewhere, Oriol Romeu looks to be fit after his recent illness, but lets be real, I can't expect he'll be getting much pitch time in this one. He's been isolated, relegated, and pushed to the side for the past two months, and it's highly unlikely he'll feature. Meanwhile, JT's ribs seem to be healing fine, and Didier looks to be alright for this one. This match also presents the return of our domestically-banned Serbian assailant. And you can surely expect he'll be getting the nod on the right side of the defense.

Rejuvinated. That's the word being bandied about these days. Roberto has come in and managed to revitalize an aging squad that simply could not coexist under Andre. I mentioned earlier that this tie represents a peach of a chance to settle the score against a Barcelona side that seem to have had the luck of the Irish on their side for a few years. But perhaps more importantly, this could be the last time this core group of players gets to make a run at the title. We have no way of knowing what the summer holds for us, and with a few players out of contract in June, it's anyone's guess as to how this plays out. If this is indeed the end, then it's been a hell of a ride. But lets not shed a tear just yet- lets celebrate the fact that we're in the hunt when nobody in their right mind expected us to be. We're the underdogs for good reason- we're the weakest side on offering this week. But, that presents a chance to rise above expectations and provide the upset we so desperately crave. There's plenty of evidence to suggest that we have the quality to see this one through tomorrow- our recent form, in particular our Tottenham second-half, was excellent. Certainly, there are ways we need to improve. Discipline is the name of the game when you play a Barcelona side as well-coached as they are. But it's bigger than that, it's more than just being disciplined. To get anything out of this match, we have to come at them and attack. I mean it, attack. 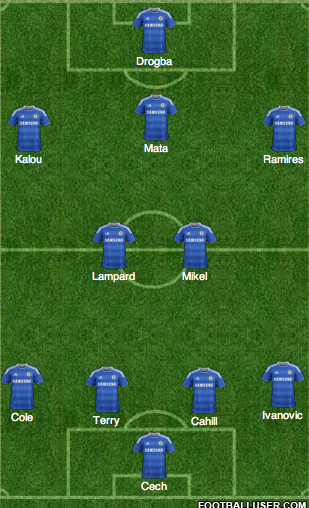 Same squad that delivered on the weekend, except with Gary in Luiz's spot. Look if it ain't broke, don't fix it. Granted, Fernando is Barcelona's boogeyman as history suggests. He's scored seven times in ten matches against them. Soooooo, I mean I'm not saying you should throw him out there, but if you do, you can expect he knows what the hell to do. His recent form is also a plus. But look, Didier is the man for the big moment, he's in form, and ready to dominate this one. So lets keep the same side as it was and get at them for this evening showdown.

That's all I got for now friends. Stay tuned. Carefree.