Chelsea scored some extraordinary goals against Tottenham in the FA Cup semifinals but the Ramires goal stands out to me because, unlike the other goals, it came at the end of a solid build-up from defense to attack. Second-by-second analysis of this goal after the jump. 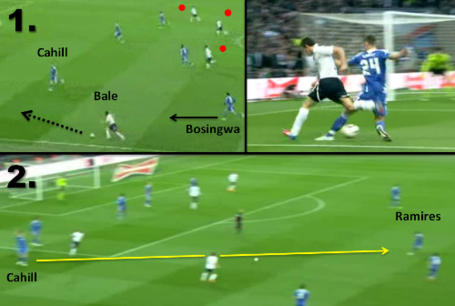 A very good defensive work from Gary Cahill started this move from the back. Modric freed Bale down Spurs' left. With Bosingwa out of position, Cahill moved wide to cover Bale. As the Welsh man ran down the flank, three Tottenham attackers were running toward the Chelsea box with three Chelsea defenders tracking back. A cross from Bale would have left Chelsea exposed. But a well-timed tackle from Cahill solved the problem. (The pictures above do not do justice to the quality of the tackle. You can see it in gif format here.) The ball was won cleanly and his pass to Ramires marked the beginning of this build-up. The former Bolton defender has been nothing but impressive since his move to Chelsea and it is turning out to be a very wise transfer.

Switch from Left to Center 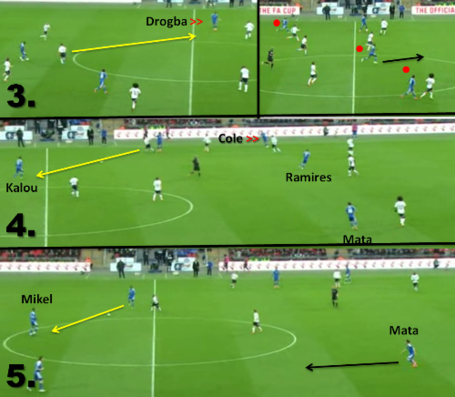 When Drogba received Ramires' pass on the right flank, it looked like a quick counter-attack was on the menu as Ramires, Mata and Cole pushed aggressively forward. But Spurs were quick to recover and pretty soon, all the Chelsea forward runners were marked. Instead of forcing the ball forward, Drogba tapped it back to Kalou. I think that was the right move. Chelsea were 2-1 up with less than 15 minutes on the clock and there was no need to take an unnecessary risk. Kalou squared the ball to Mikel and Chelsea's point of attack switched from left to center.

Also note that the initial movements by Cole, Ramires and Mata had pushed Tottenham's defense deep into their half, creating a sizable gap between their midfield and defense. Basically, the distance between their two banks of four had been stretch. And Juan Mata, a player who enjoys that kind of gaps, dropped back to get involved in the build-up.

Mata between the Lines 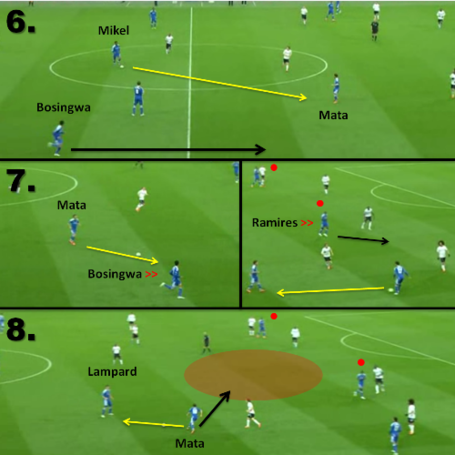 Mata switched the point of attack to the right with Jose Bosingwa helping out on the wing. But when the Portuguese got the ball on the right flank, Chelsea had only Drogba and Ramires in forward positions and Spurs defenders were in a good defensive shape. Again, instead of forcing the ball forward, Bosingwa opted to cut back to Mata who passed back to Lampard before making a move into the gap between Spurs' midfield and defense. 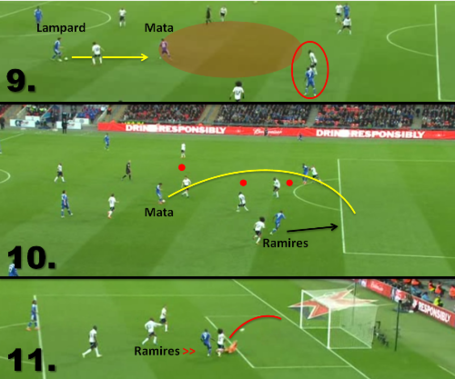 When Mata moved into that pocket of space in front of the Spurs defense, Ledley King was marking Ramires while Assou-Ekotto kept an eye on Bosingwa. But as soon as Mata got the ball, both King and Gallas stepped toward the Spaniard, leaving Ramires with Assou-Ekotto who was a few steps behind. Mata took advantage of this Spurs defensive mishap by making a beautiful chip pass into the path of Ramires, who scored with another lovely chip over Cudicini.

This build-up has a total of 10 passes and took 37 seconds. Chelsea has scored a number of fast paced counter-attack goals recently but they took their time with this one -- showing restraint forcing a quick play on a couple of occasions. Cahill started the build-up from defense and Mata's movement and passing made this goal happen.