How Many Points Has Chelsea's Poor Late Form Cost The Club?

Share All sharing options for: How Many Points Has Chelsea's Poor Late Form Cost The Club?

We've been talking a lot about Chelsea's unfortunate habit of conceding late goals recently, so now it's time to take a bigger-picture view of what's going on minute by minute in Chelsea matches. If you recall, a few months ago I did a quick check to see if the club would be any better off if matches ended after 80 minutes, and it turned out that any effect would be minimal because we have a habit of scoring a lot at the end of matches too.

What would be the ideal length of a football match, as far as the Blues are concerned? Let's look at goal differential over the course of our games to find out. 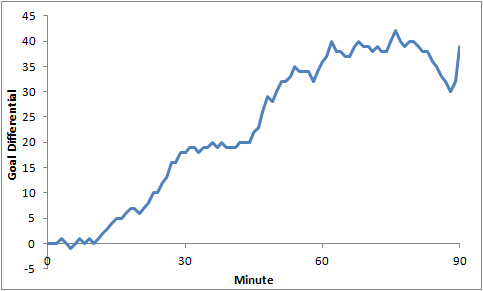 Chelsea's maximum goal differential in all competitions is plus 42, which occurs in the 76th minute. By then, Chelsea have scored 71 goals and conceded 29. Over the next 12 minutes the differential is negative 12, which is ridiculous considering we've scored nine goals in those twelve minutes. Chelsea salvage much of that by being very very good at scoring in injury time (ten goals this year!), but the last few minutes of the match clearly hurt us.

So that's goal differential in all competitions, but obviously that's not really what we're most interested in. The most important competition as far as consistent form goes is the Premier League, so ditching the likes of the FA Cup and the Champions League, we find that the max differential over out 33 matches so far is plus 23 in the 68th minute - 75% of the way through the game.

By the end of the 90th, we're at plus 18 - that's negative five goals over the past quarter of the game and thirteen fewer than the differential you'd expect given their form over the first 68 minutes.

How many points is that worth? Long ago we found that the relationship between goal differential and points over the course of a season is extremely close to Pavg+0.6451*GD*Gplayed/38. If we apply that formula to our current differential, we get 55 points, which means that the distribution of goals has actually slightly favoured Chelsea this year (think of the late, irrelevant goals we conceded in the early Andre Villas-Boas era). If we're clever about it, we can graph how many points we could have expected had our form up to a certain minute continued. So let's do that: 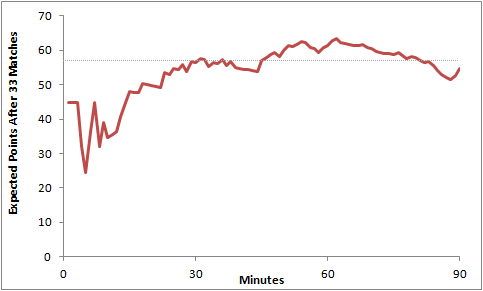 The dotted line is Chelsea's actual points total. As you can see, we peak around the hour mark - at the 62 minute mark, to be precise. At that time, we've scored 40 goals and conceded 17, good for a +23 goal differential and a projected total of plus 33. Our formula spits out an expected points total of 63, six higher than our current position and good for fourth place pretty easily.

I've seen a lot of explanations and excuses for Chelsea's poor play over the last 25 minutes or so of matches, but none really jives. This isn't a normal distribution of goals conceded either in the Premier League or in Chelsea's history, and the magnitude of the effect is high enough that it won't just be about having old, tired players (plus the fact that we have a younger team than the past three years too). I can't really explain what's going on here, but I do know that it's very, very bad.