Chelsea's Horrendous Late Defending - Have We Got Any Such History?

Share All sharing options for: Chelsea's Horrendous Late Defending - Have We Got Any Such History?

We were all thinking it; it was right in everyone's face, on the tip of everyone's tongue. Graham just made it visible, Chelsea's very own Project Mayhem...or how to not defend in the closing stages of a match.

It's as if we're under the constant impression that football matches are only 80 minutes long...for when the clock hits the big 80, systems break down and the floodgates open up. Perhaps our defense is old. Or bad. Or old AND bad? Perhaps it's AVB's fault? RDM's? The revenge of Bosingwa? I knew we shouldn't have made fun of him!

One of the straws that I clutched at in the wake of Graham's post was that maybe this is not so strange. Maybe it's "normal" for teams to concede this often, this late. After all, matches are often decided in the final exchanges, no? Even if that's not the case, maybe it's something more specific to just Chelsea. As one of the top teams, a consistent winner over the last decade, it's only natural for our opponents to try to nick a result at the end or score that last meaningless consolation goal.

This latter thought seemed rational enough to be worth a few hours of my time tonight. Armed with the faint hope of finding a trend that might mitigate this season's defensive midnight-horror-show, I went back to the dawn of time and space* and compiled some quick statistics. However, unlike Graham, I only looked at Premier League matches (to allow for easy comparisons across the seasons) and used 15-minute intervals (personal preference).

*Can you believe that the space-time continuum has now existed for NINE years?! This universe sure is old!

You may have a hunch as to how this will turn out. You're probably right.

First, let's re-frame this year's data to my parameters. I like the 15-minute intervals as it breaks each half into easily digestable thirds and takes the half time break into account better than 10-minute intervals (where the 40-50min data set spans two halves). 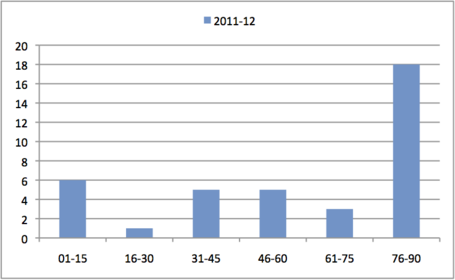 So that's 38 goals conceded, 18 (47%) coming in the last quarter of an hour. I'm not sure words can describe just how tragic that is. Holy cats!

Let's see how we fared the previous two years, under Carlo Ancelotti: 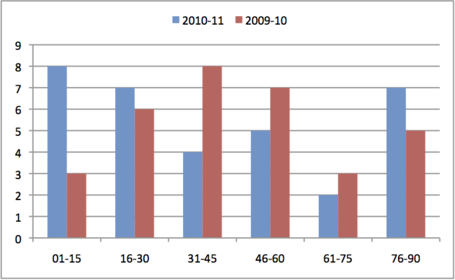 Nothing truly outrageous here. Minor trends exist (last season we liked to concede early; in The Double winning season we often conceded on either side of half time) but nothing near the magnitude of this season's last-15's.

In case we could chalk this up to instability at the top, let's see how we did during the two seasons before Uncle Carlo's rise to power...when we had no less than FOUR different managers and even a Ray Wilkins cameo: 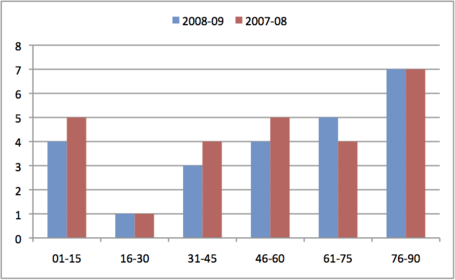 If we're clutching at straws, there might be something here. Clearly, the last 15 minutes was also the most likely time for these Chelsea squads to concede as well.

And then, we come to vintage full seasons of Mourinho. Let's just marvel at the last 15 minutes of his teams (and ignore the fetish of conceding just before the half in 2005-06**): 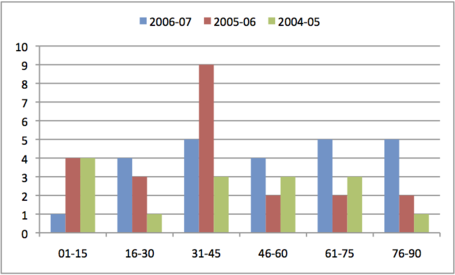 The stellar performance may have dropped a bit in his last full Chelsea season (and, accordingly, so did our title hopes), but the fact that we conceded THREE goals in TWO SEASONS' worth of final quarter hours under Jose Mourinho is beyond amazing.

(Take a moment to reminisce and reflect...and then move on. Those days have come and gone. While some players may still remain, we probably won't see such excellence again. Even if The Special One were to return to Stamford Bridge.)

Arriving at the first year of the space-time continuum, we find Claudio Ranieri. The Tinkerman, for all his meddling, seems to have done alright (the fact that I did not take Champions League matches into account lets Ranieri off the hook for the Monaco debacle - both late goals there coming after 75 minutes): 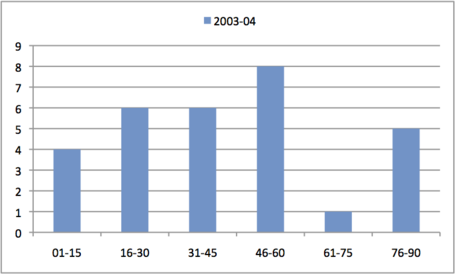 In summary, as I wrote before the jump, your hunch was probably correct. There is no historical (i.e.: last 9 years) precedence for Chelsea to be conceding this many late goals. What we're seeing right now is historic, tragic, soul-shattering. As a final perspective, here's the percentage of goals conceded in the last 15 minutes for all the above mentioned seasons: 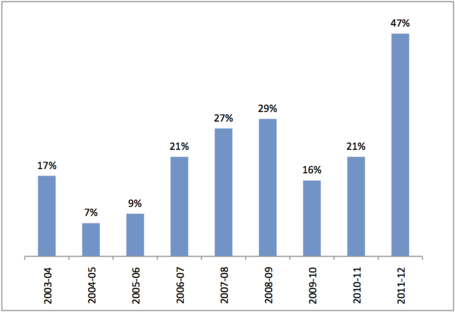