When Chelsea were still struggling under Andre Villas-Boas, one of the main concerns was the sheer number of late goals they were shipping. Chelsea were scoring late too, so it wasn't as big an issue as it might have been, but it was still worrisome. Shipping goals late is never good, and the team seemed to have a habit of retreating into a shell and letting the opposition come at them whenever they had the lead in the second half.

Was this actually a problem? Yes. Is it still a problem? Very yes. Let's take a look at the team's cumulative goals conceded by minute in all competitions after the jump.

Hooooly cats. As I mentioned on twitter literally while typing that last sentence (between 'hooooly' and 'cats', for those interested in my writing process), Chelsea have conceded half of their goals after the 68th minute, which means that for three-quarters of the time we're playing like one of the better defences in Europe, allowing the opposition to score once every two hours or so. The other quarter? Once every 43 minutes.

If you extrapolated those values over the course of a Premier League season, 'late' Chelsea would ship a hilarious 80 goals a year, which is worse than the pace Wolves are setting at the bottom of the table. That's relegation form, y'all - no wonder we haven't had many 'easy' games so far this year. Otherwise, we'd looking at having conceded 27 goals all season, which is better than what either Manchester City or Manchester United will manage.

Let's look at this in ten-minute intervals, ignoring injury time because injury time is a gigantic pain: 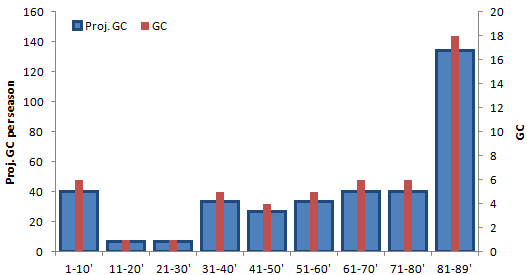 When I planned this post, I was expecting to talk about what could possibly cause this flurry of late goals, but now I'm a little bit baffled. What on Earth could cause a team to turn from the most defensively solid outfit in the Premier League to the least at basically the flick of a switch? It's dumbfounding, and I don't have anything like a satisfactory answer. From the looks of things, Roberto di Matteo doesn't either.