Share All sharing options for: A free lesson in positioning for Fernando Torres courtesy of Robin van Persie

A few weeks ago we took a look at a real stinker of a game from Fernando Torres and came to a few conclusions about what he could be doing differently to help create more legitimate scoring opportunities for himself. This past weekend we were treated to an absolutely perfect example of what he should be doing by none other than Arsenal's Robin van Persie. It seems to be generally accepted that Arsenal won the game despite being thoroughly outplayed by their opponents, and RvP in typical fashion was lethal with the two chances he had. After the jump we're going to look a little at the buildup to the first goal and see what van Persie was doing that made life easier for his teammates.

In the screen capture below, you'll see Robin van Persie circled in red. The ball is just being played to the right wing from the center of the pitch, and RvP is sitting about halfway between the two center backs.

This is excellent positioning when the ball is in the center of the pitch, as it allows for van Persie to cut any direction on a ball played over the top and have some separation from a defender. When the ball is played to the wing, however, this type of positioning is not very useful. If RvP starts his run from his current location, the player on the wing (Sagna in this case) will have very few options for getting him the ball. A cross over the top will not have much space to drop in over the front defender. A low, hard cross would therefore be the only option, forcing Sagna to place a perfect ball between the defender and goalkeeper for RvP to run on to. Let's take a peek at the adjustment made by RvP. 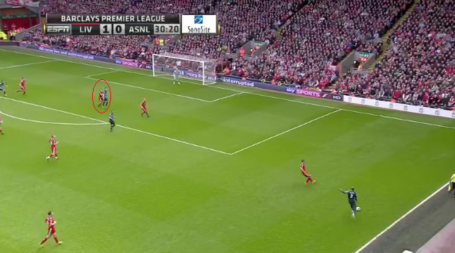 As Sagna is running on to the ball we see RvP drifting into contact with the defender behind him, placing him neatly on his back shoulder. What he's done here is to open up as much space as possible for Sagna to cross into. The low cross behind the defense is still an option, but the much easier high cross over the near post defender is now possible due to the pocket of space RvP has just created. With this simple move, RvP has essentially created another passing lane and taken two defenders out of the equation. The defender on his back now has only the option to foul in the box or sit idly by as RvP shoots. The defender on the near post is relegated to mopping up any potential rebounds. It's entirely up to Reina now if a decent cross is delivered, and that's never a good position for the defense.

As the cross is coming in, you can clearly see that RvP has held off the defender he positioned on his back. He's now going to have a free attempt on goal as the ball drops to him, and in typical RvP fashion that ball will be buried in the back of the net. Arsenal are now level despite being on the back foot for most of the game due to perfect center forward play from RvP.

This is not rocket science. When the buildup is happening from the middle of the pitch, spacing like RvP had initially is acceptable. When the ball is played to a wing, a top center forward is going to create himself space by drifting towards one defender or the other. The bigger pocket to pass a ball in to, the larger the chance of a quality pass. RvP does this. Fernando Torres does not. Anyone else out there think we might be able to improve our efficiency from crosses without too much effort?