We've made excuses for his hastiness in the past, but the time has come to lay some blame at the feet of our impatient owner. More, after the jump: 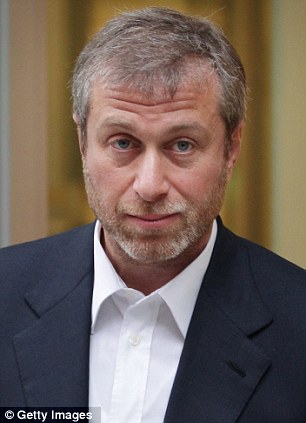 It's been, to put it bluntly, a horrible six weeks for Chelsea. Results have been hard to come by, performances have waned, and speculation regarding the safety of Andre's job spiraled into some black hole of will-he will-he-not get the sack. If you paid attention, then you know that none of this was necessary. The fever-pitch that surrounded Andre's last days at Chelsea could easily have been avoided with one simple referendum provided by Roman Abramovich. As is customary to his style, however, no such public backing came. And in the end, it was easier to justify cutting Andre loose (to the tune of 50 million quid, or, one Fernando Torres) then suffer the indignity of watching his expensive toys listlessly underperform. The press will have you believe that Roman read the riot act to the players in the wake of Andre's dismissal. I call bullshit on that. This man, for all his might, chose to buckle under the weight of player power rather than stand up for his expensive prodigy. In the end, it was all for naught. The banishment of AVB signifies the end of what could have been a bright era in the club's illustrious history. But we'll never know how it might have panned out, with only 8 months of data to truly understand what transpired.

For those who feel Andre was an expensive flop, I would remind you that during the same stretch of games under Roberto Mancini, Manchester City had an identical record. Identical. Yet, he was regarded and praised as a brilliant manager who had done wonders to turn City into a dynamic squad with potent attacking prowess. I for one, just can't find the silver lining in any of this. Cutting him loose in this manner (slightly more dignified then the push out the door Carlo was handed) reeks of embarrassment. It would appear that the players, once again, have won the war. They've succeeded in running Avram, Scolari, Carlo, and now Andre out of town. For shame. The stories circulating suggest Roman is planning a mass exodus this summer. I'm not sure that's even a realistic possibility with Financial Fair Play hanging in the balance. Some of the tidbits I've scanned highlight a deep-rooted obsession with finding success for Andre, going so far as to claim he slept in his office at the training ground, and would spent almost sixteen hours a day at the facility going over tactics and watching film. It paints the picture of a man consumed by pressure and fear. Clearly, the expectations of being Roman's newest toy got to him.

But how can we truly be surprised? At 34, it was never going to be an easy ask for Andre to change the culture, style, and composition of the squad- in eight months. Undergoing such a task, against the grain of expectation and in the manner by which he chose, was more confrontational than calming. What we've learned in the aftermath of his termination is appalling. There's plenty of blame to go around- for the players who succeeded in getting their way again. This expensive selection of aging legends who openly criticized Andre's managerial style can take no pride in their involvement. There's blood on their hands, and they know who they are. For Andre, who so obviously cracked under the pressure of the last eight months, eventually fading into an eccentric coma that featured absurd press conferences and acerbic soundbites. For his management of the squad, flying in the face of conventional wisdom and relenting from backing off his stance until the death. For the media, who cornered him and offered no respite or relief. For Roman, who put his millions to work in the summer, and disappeared into the background, only to return this weekend with an axe in hand.

I take no pride in being a Chelsea fan today. When Carlo was let go last year, I went on a rant. I felt dismayed, embarrassed, and ashamed. The manner in which he was sent off was unprofessional and, at the time, a black eye on the club's reputation. I see no difference between then and now. Andre took training on Sunday, and received his pink slip some thirty minutes after the fact. Gutless, cowardly, pathetic. Shame on you Roman for having no faith or patience. You knew that it was going to be a long road to transition from what we are to what we desire to be. Shame on you Gourlay, Buck, Tenenbaum, and Emenalo. You sat with your arms crossed at every match, a look of disgust painted across your smirks. No public backing for the coach to be found either- clearly you're more focused on this supposed move to a new stadium. Shame on you players- you've just highlighted what every fan despises about the game. Shame on all of us, for being so impatient and fickle with our desires that we vacillated between loving and altogether despising Andre in eight months time.

Where we go from here was well summarized by Jack yesterday. We'll temporarily improve, everyone will be lured into a false sense of security, and we'll enter the summer looking for our 8th manager under Roman's watch. Our systemic problems, however, remain. If Roman's going to find a new misfit to take this hot seat, then we should put the bullshit and pretense aside and let them know that the expectations are straight away. Win, or go home. Right away. No time to implement these far-reaching changes. You have to win, with style, and do it from day one. Why pretend we have an ounce of patience? The club simply doesn't. I don't envy Roberto Di Matteo this afternoon. It's a thankless job to endure and he knows the expectations he's facing will define his reputation henceforth. In a year, Andre will resurface, new job in tow. With half the budget and less experienced players, he'll succeed. This much I think we can all agree is certain.

For his sake, I hope he does. He was the right man, at the wrong time for a club that seriously dismissed and undervalued his promise. He deserves better. Perhaps he'll go home to Porto. Or Inter. Doesn't matter. I just know we'll see him again in the Champions League, and he'll flourish. I truly hope he does for his sake. Shame on you Roman. Shame shame shame. Gutless decision, and one that only you can take the blame for. The players can cry as loud as they want, but it's you that has the power to wield the axe. And you did. You certainly did.