Aston Villa 2-4 Chelsea: A frolic, then a fright

Share All sharing options for: Aston Villa 2-4 Chelsea: A frolic, then a fright

From 2-0 up and sleepwalking toward three points to 2-2 and then, amazingly, 4-2 - this was not the way any of us expected this match to play out. And if you did, you're a weird soul. Nevertheless, it's a crucial win as we inch closer to the top four. 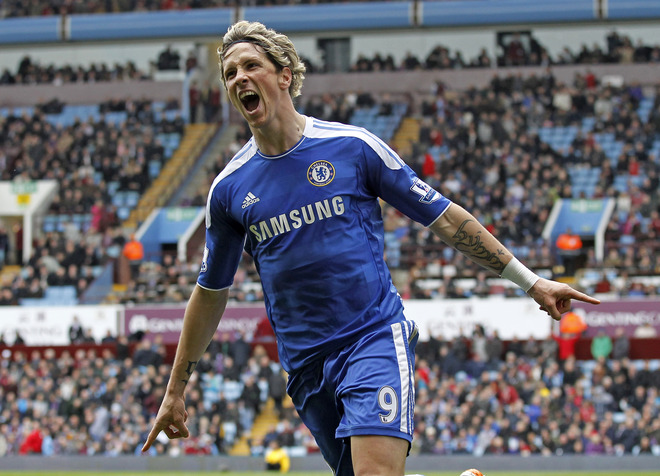 I'm not sure that we've played a more bizarre game this season.

Some of us were on the couch watching the Chels grab a deserved lead inside 10 minutes, and then solidify our position with an early second-half tally through Branislav Ivanovic. At this point, you're dozing off with a smirk on your face because, in all honesty, we were supremely comfortable. Aston Villa's band of teenagers were offering nothing and we were throwing it in first gear in anticipation of our midweek Champions League quarterfinal second leg with Benfica.

Not so fast. Two goals in three minutes from the hosts, in the 77th and 80th minutes, came really out of nowhere and mainly thanks to some egregious play at the back from us. A return to our roots (ludicrously poor set-piece defending) saw Villa grab their first on a throw-in via James Collins, who had already threatened three times from corners. Inexcusable stuff. Then, only moments later, there was Ashley Cole completely shutting off at the back post, allowing Eric Lichaj to ghost in and get a pivotal touch to Marc Albrighton's lowish cross from the left side.

Casual defending. It's been a problem all season, and it nearly cost us dearly today.

Thankfully we responded immediately. And I do mean immediately, with Ivanovic pinging a header past Shay Given at the near post on 83 minutes. Fernando Torres, who was playing well for the most part but having a torrid time in and around the penalty box, did well to flick on the corner to give Bane a chance. It was nice to see the team offer a riposte in such a manner, as for much of this season in these type of situations we've failed to react well.

The reaction continued, too, courtesy of Daniel Sturridge, who scored our opener, and Torres. The Spaniard, 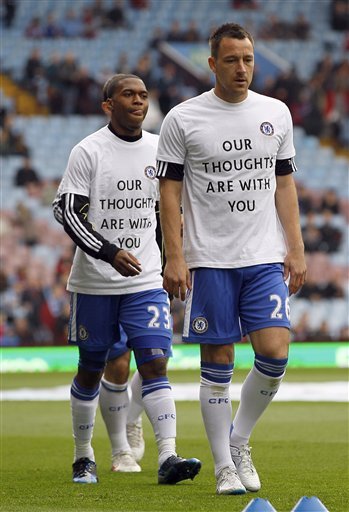 lambasted all game by the bummy ass color commentary hack, shoved a foot in the man's ass with a wonderfully taken goal in the second minute of added time. Sturridge, perhaps shockingly, p layed provider, luring in two Villa players before laying the ball into the path of Torres on the right edge of the box. A touch later, and Nando whipped a low drive in at the far post.

How was this chance any different from a number of his missed opportunities recently (including the one he had in the early going Saturday)? He didn't think about it. You could tell by watching the play unfold. He simply took the touch and struck the ball. Instincts. This is what we want to see right here.  I have a feeling the man is about to heat up NBA Jam style.

Solid result this definitely was, even if we made it far more difficult than it needed to be.

Special shouts to Bane, Petr Cech - who made a wonderful kick save on Gabriel Agbonlahor near the end of the first half - and John Obi Mikel, who all put in immense shifts at their respective positions. John Terry, as well, was at his usual imperious best, particularly as Villa came to life over the final 20 minutes.

There are some concerns, however, particularly on the injury front. David Luiz picked up what is being described as an ankle ligament injury and was forced to withdraw before halftime. He was replaced by Gary Cahill. Luiz has grown into a key figure for our defense in the last month, and you and I both know that we need him to be fit as we chase a pair of trophies and a top-four finish. Here's to hoping it isn't as bad as it could potentially be.

With the win, we ended a run of three successive away league defeats (excellent) and now sit just two points adrift of fourth-place Tottenham, who play Swansea at the Liberty Stadium on Sunday. Couple our victory with Arsenal's surprising 2-1 defeat to QPR on Saturday, and things are actually looking up after last week's dire goalless draw with Spurs left most of us fearing the worst. Arsenal host Manchester City next weekend, while we host Wigan. Conceivably, if results go the way we need them to, we could be two points behind Arsenal by the end of next week with a head to head still left to contest. That's pretty damn encouraging.

Also, I would be remiss if I didn't once again send The CO's best out to Stiliyan Petrov. I teared up a bit when he received that standing ovation during the first half, as you could see just how much not being out on the field was hindering him. I think we all know he's going to fight this illness with everything he's got. We're looking forward to seeing you back on the field sooner rather than later, Stan.

That's all I got for now. To midweek then and a potential place in the Champions League semifinals. That sounds pretty good doesn't it? Let's have it, boys. Carefree, bitches.