Four months ago, if you asked anyone who Chelsea's player of the year was, they would almost certainly have told you it was Juan Mata. The little Spaniard was Andre Villas-Boas' major success story, providing the club with a continental creative influence that we haven't seen for a very long time. He was banging in goals and providing assists left and right, and was the major threat in a season where the centre forwards were weak and Daniel Sturridge was inconsistent.

Now, things aren't so clear-cut. It's not that Mata has been bad per se, but he's certainly been less good, and the distance between him and, say, Ramires, has closed significantly. Mata simply doesn't seem to command the influence that he once did. What's going on here? Let's take a look at the statistics to find out...

First of all we should probably address the question of whether or not Mata really is suffering from a lack of influence recently. The way I chose to measure this was in touches per ninety minutes in each match (which controls for minutes played). Whoscored keeps track of both touches and minutes, so this was a pretty easy thing to compile. Here's Mata's numbers month-by-month, excluding that cameo against Norwich City in August and Carling Cup/FA Cup matches: 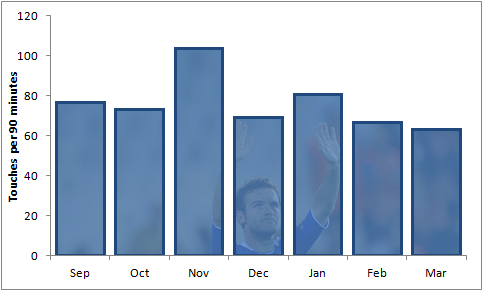 It looks like there's something here, although it's not entirely clear. Mata had a good January, but in terms of touches, his two very worst months have been February and March. That doesn't mean much in and of itself, but it does appear that the initial hunch - that he's been less involved than usual recently - was more or less true.

So now that we've established that Mata's influence is diminishing, we should probably be asking ourselves why. I've come up with two testable, reasonable (I think!) hypotheses:

The tired one is obvious. Mata's now played something like 3,000 minutes this season, featuring heavily in virtually every game Chelsea care about. With things so tough for the Blues right now, Mata has to play, and it shouldn't come as any surprise that he'd be less effective after such a grueling season.

The second is perhaps more interesting. There are a number of reasons for Chelsea to shift to a 4-2-3-1, but Mata is central to the formation change. His defence as a left winger has left Ashley Cole exposed for much of the year, and a move infield should mean that he has fewer defensive responsibilities. Furthermore, putting Mata as a trequartista should allow him to better influence the match - but it comes at the cost of putting him in a more tightly defended zone, which would make it more difficult for him to receive the ball.

Let's take a look at the latter idea first:

I picked out the matches Mata started as a central midfielder and compared them to the ones in which he began on the right, opting to ignore the times when Andre Villas-Boas shifted Mata from left wing to central midfield during a game (Manchester United away and Wigan Athletic away come to mind). The chart on the left clearly shows that he gets more touches per match as a left winger - 72 compared to 66.5 - but the one on the right shows that these numbers may be skewed by a more general trend of Mata simply becoming less effective as time goes by.

Let's move to our second idea - that he's tired: 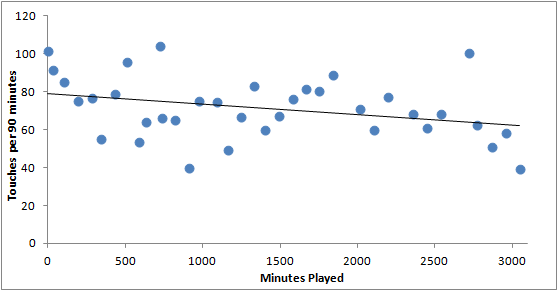 Here I graphed Mata's touches per ninety minutes against his total minutes played (including the cup matches in the minutes, but not in the touches). The trend should be pretty obvious, but there's a big black line on the graph just in case you're not seeing it - the more minutes Mata's played, the less well he does. In fact, you can get a reasonable prediction of how many touches he'll get in a certain match just by his overall playing time: For every full match played, Mata takes about half a touch fewer per ninety minutes.

Let's go back to our wide forward vs. trequartista hypothesis and see how the CAM numbers deviate from that formula. It might still be that playing in the centre is hurting Mata, but I suspect that the numbers will show it doesn't really matter where he plays... 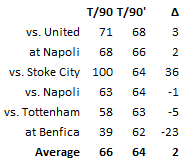 It's not definitive, but in case anyone thought that the problem with Mata was the move away from the left wing, that doesn't appear to be particularly true. Instead, it just looks like he could use a bit of a rest. Is one forthcoming? Probably not, but it would probably be the right thing to do. It'd take a brave manager to drop him, though.