Visual Evidence That Oriol Romeu Is, In Fact, Alive And Well

Share All sharing options for: Visual Evidence That Oriol Romeu Is, In Fact, Alive And Well 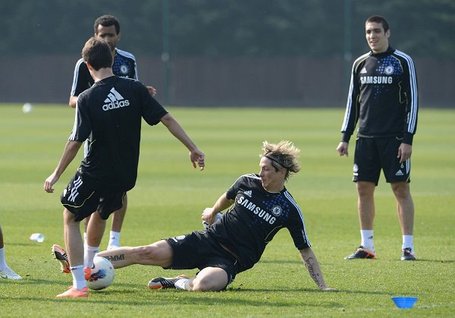 In case you've forgotten what he looks like, he's the one standing around to the right, admiring another "striker's tackle" from Fernando Torres (good ol' Torres, always putting in that Effort with a capital 'E'!). I do believe the man on the receiving end of the tackle is none other than Lucas Piazon, which is supremely exciting in its own right. Jose Bosingwa looks on, confounded by this concept of "tackling".

Romeu burst onto the scene under AVB after his under-the-radar summer transfer from Barcelona, but has not featured since the dark days of the Manchester United 3-goal comeback. The double whammy of Romeu's poor performance in that match and then a series of knocks, niggling injuries, and other such minor ailments (one assumes) have kept him sidelined for the better part of two months.

Initially, the slick-passing Spanish youngster impressed everybody with his cool & calm under pressure and many were quick to anoint him a savior of our midfield woes. Admittedly, he often looked to be our only central midfielder up to par for the style of play that AVB attempted to instill. However, much like the system, initial enthusiasm eventually died away and the cold, harsh reality set in. That's a bit over-dramatic of course. Oriol Romeu clearly has bags of talent and most of his inconsistencies stem from the fact that he's still just 20 years old.

Now that he's healthy - he's actually been back in training since last week - with games coming thick & fast, I would think we'll see Oriol adding to his 20 appearances (14 starts) in all competitions for Chelsea sooner rather than later. And with Raul Meireles picking up a knock midweek and the resurgent and suddenly once again imperious John Obi Mikel potentially saved for the "big" matches, I wouldn't be shocked if that happened as soon as this weekend.