Share All sharing options for: Was Fernando Torres ignored by Andre Villas-Boas?

Fernando Torres is always a hot button topic around here, so what better way to get you to come read than to have yet another post centered around our mega-expensive center forward? Torres' agent made some headline today with his quotes about Andre Villas Boas refusing to use Torres, and that just didn't sound accurate to me. With that in mind, I decided to do a little digging and see exactly how things have been handled between the two managers we've had this season.

For the purposes of this exercise, I looked at the three player in the Chelsea squad who have lined up at center forward at some point this season (Torres, Drogba, and Lukaku). I broke down the total minutes each have played, broke it down again under AVB, and finally broke it down under Robeto Di Matteo. I then took all of those confusing numbers and slapped together three nice looking pie charts so that you can easily see the breakdown of minutes each has played in comparison to the others in total, under AVB, and under Di Matteo. Hit the jump to take a peek...

First we'll look at the percentages of total minutes each has played during the course of the season. These numbers include the Premier League, Champions League, Carling Cup, and FA Cup: 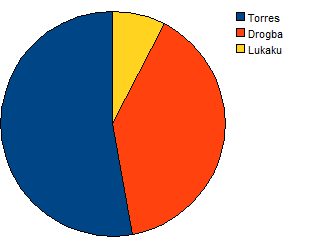 Now take a peek at just the games that AVB was in charge: 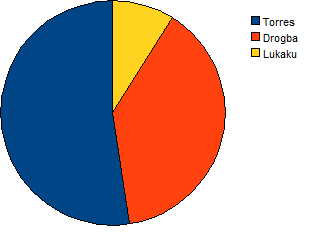 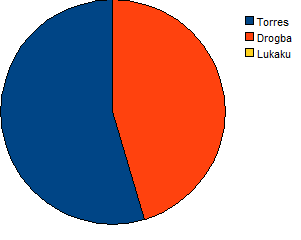 For what it's worth, Di Matteo hasn't been in charge for long enough to really draw conclusions. That said, it doesn't appear that Torres is being used any more or less under Di Matteo than he was under Villas-Boas. It's nice that he seems to be happy and playing well, but this seems like just another pointless cheap shot at AVB. Small sample size aside, this particular complaint really seems to be lacking any sort of factual basis to back it up.