Share All sharing options for: Goal By Goal: Salomon Kalou's Winner Against Benfica

As I'm sure you're all aware, Chelsea beat Benfica 1-0 in Portugal on Tuesday, putting themselves in a wonderful position to advance to the Champions League semifinals for the first time since the 2008/09 season. It was a great result and a fairly good performance to boot, despite Benfica coach Jorge Jesus whining about how his side desreved to win (they didn't).

When you're playing away in Europe, getting a goal is almost as important as winning outright. Obviously, the Blues got both via Salomon Kalou's 75th minute strike, which came after both he and Juan Mata blew clear chances for the opener. How did Kalou's goal find the back of the net? Simple. Let's take a look after the break.

Be ye warned, for here be .gifs. 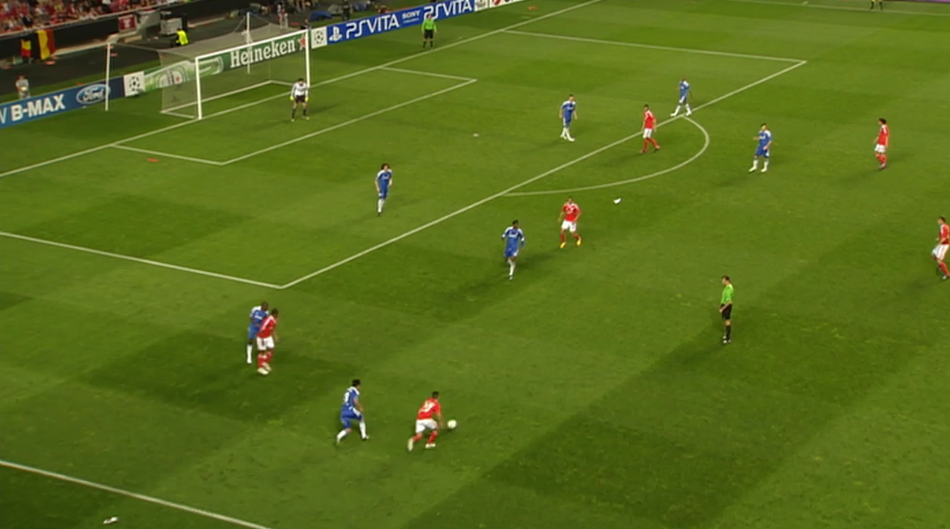 As you can see, Benfica are playing down their left after a Fernando Torres offside call. Chelsea's defensive line is a little bit strange - Paulo Ferreira, the right back, is tracking Nicolas Gaitan and Ramires is on Emerson, but positionally the two are reversed, so Chelsea's back line is Ashley Cole, John Terry, David Luiz and Ramires. That's not a big deal, because the two lines of four are intact, but it does show that the Blues are being dragged around pretty easily.

Here's what Benfica are trying to do: 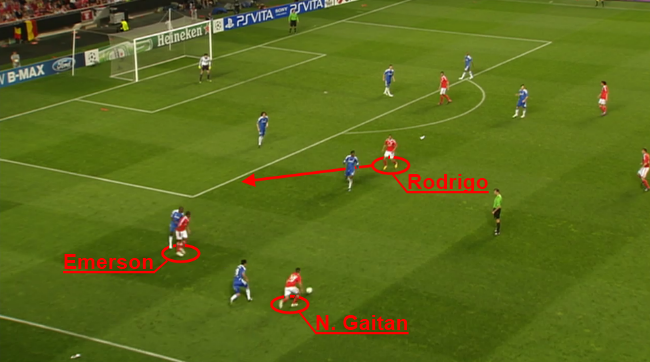 John Obi Mikel isn't really paying attention to what's going on behind him, and that means that Rodrigo can make a run into the box. Nicolas Gaitan picks him out pretty easily, and suddenly Chelsea are in a very dangerous position. Since Gaitan has continued his run and still isn't being picked up, shuffling the ball to Emerson would present the left back with a really dangerous passing option and Gaitan with a clear cut scoring chance. Like this: 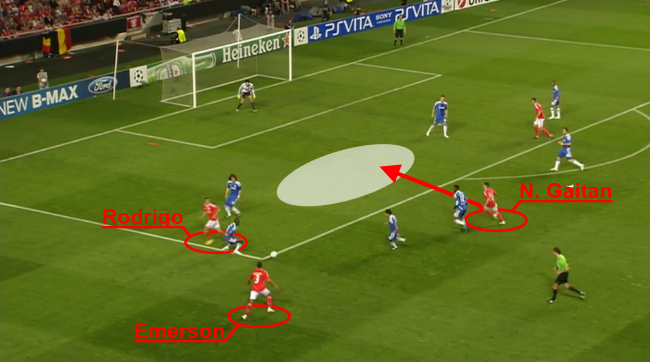 Fortunately for Chelsea, it went a bit wrong for Benfica with Rodrigo's attempted layoff to Emerson. Here's what actually happened:

So, Benfica's goal threat is over thanks to a little luck, and Ramires can now bring the ball down the Chelsea right. There's still plenty of work to do before the Blues can threaten - Emerson, Javi Garcia and Jardel must each be navigated to spring clear, and there's very little chance of Ramires simply charging through all three. But he tries:

Ramires had been using he speed to abuse Emerson all night and did it again here, stopping before flicking the ball past the left back and accelerating away. Emerson tried to foul his compatriot, the right move from a defensive standpoint, but couldn't even manage that. Awful mistake, but good piece of skill from Ramires. Javi Garcia's next, but Fernando Torres is in support and so Ramires wants to try a pass:

Well then. This is another stroke of luck. Ramires' first pass is awful. Ostensibly it's to Torres, but it'd be behind him and in a completely useless area - Jardel would be right on top of him and Javi Garcia would also be on hand to make the tackle. Woeful decision making by Ramires, and I have no idea what he was thinking there. Fortune, however, favoured the Blues. The pass was deflected straight back to Ramires by Garcia, and Ramires takes the markedly more sensible step of slipping Torres down the wing.

Torres is too fast for Jardel and skips clear or the centre back, allowing him to burst into the box and pick out a cross under zero pressure. Juan Mata and Salomon Kalou (who was actually part of the second defensive band earlier on) are steaming into Artur's box, and Torres picks out a peach of a cross that beats Nemanja Matic, swerves around Luisao, and drops straight onto Kalou's foot. The striker finishes perfectly, putting the ball on the ground and into the back of the net:

How did the goal get built? Basically, it came as the result of two lucky breaks and three excellent pieces of skill on the counterattack. Rodrigo's awful pass ruined a Benfica attack, and Ramires managed to bring the ball away, beating Emerson brilliantly. A really lucky bounce got Ramires past Javier Garcia and Torres past Jardel, and from there Torres and Kalou played things perfectly. It was fortunate, but at the same time it was very well deserved.