They say defense wins championships. On this evidence, I tend to agree. More, after the jump: 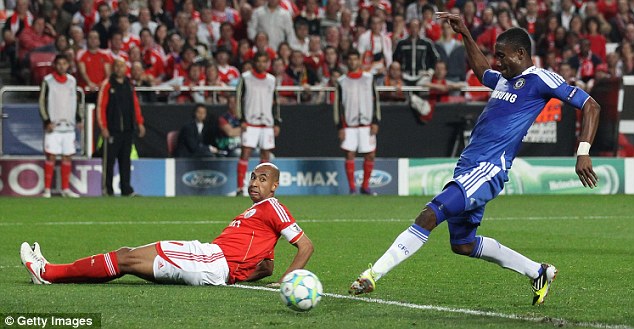 Precisely the result we wished for, in a style and manner befitting a European quarterfinal, Chelsea head home with a crucial away goal after holding Benfica to a blank. Roberto Di Matteo made adjustments, shuffled the lineup, and even found a starting spot for an old- nay, vintage- member of the squad. The result? A fantastic 1-0 lead that sees Chelsea in pole position to qualify for a semifinal date with either Milan or Barca. There was plenty of speculation pre-match circling around the lineup, the tactics, and the eventual performance. On this night, however, Di Matteo made bold decisions which ultimately paid dividends. Ivanovic wasn't deemed fit enough to be risked, so rather than plug the ineffective Jose Bosingwa in, Bobby elected to throw Paulo Ferreira into the frying pan. Yes, that same Paulo who continues to be on our books. And guess what, he looked great. Not just good, but great. He was sturdy, tight in the tackle, and gave us some steam going forward. I for one, was content with the selection- and knew that it would work out fine. Many thought it was a complete mistake from the start. Elsewhere, David Luiz got the start he was looking for, alongside John and Ashley. In the midfield, Di Matteo elected to use a double pivot featuring Obi Trice and Raul- with Frank and The Bison rendered to bench roles for the evening. Up top, Fernando got a much-deserved start, while his three-prong support included Ramires, Juan, and Sala. All told, it was a strong lineup and practically the one we anticipated- save for the Paulo decision and the Meireles start. Also, there was some Eagle flying about the pitch pre-match that made the Benfica fans go nuts. Not sure what that was all about but essentially, if it lands on its' perch then it signifies a good night for Benfica. Alas, it did. But all would not go according to plan.

The match started out cagey, and settled into a rhythm around the 10 minute mark. Both sides retained possession, with Chelsea edging the early moments through careful, sustained passing moves from side-to-side. But it would be Benfica that created the better of chances in the first 45. Oscar Cardozo found himself with space after running off the back of Terry, only to struggle in controlling a high-pass. On the opposite end, Chelsea pushed forward with limited counter-attacks, with Terry releasing the rampant Ramires down the right, who squared for Fernando to earn a corner. The initial exchanges were a touch tentative, but naturally both sides grew into the match as it evolved. Nando looked hungry for goals, running his socks off and even controlling off his chest and firing first-time on goal. Though it was well high and off the mark, it was a sign that he appears to be growing in confidence. Another opportunity saw him cut back from a close angle onto his left foot, only to shoot wide once more. The signs were there that goals could be had on either side. But the beauty of this one, much like many of our recent encounters, lies in our discipline on the defensive side of the ball. The organization and intelligence, as documented by Martin Tyler and Gary Neville (I know, shocking), was truly something. Time after time, Chelsea put ten men behind the ball, rotated in unison, and closed off available supply lines. Nico Gaitan and Axel Witsel were forced to push through the middle, clogging the lane and making chances sparse. On the rare moment when Benfica found an inch of space, it was the typically brutish Bruno Cesar who fired into the outstretched arms of Cech- leaving him little work to do. Elsewhere in the first, Meireles found himself with a screamer that Benfica did well to clear, while Benfica applied pressure around the Chelsea box to little effect.

The second half brought the news that Raul Meireles had finally taken the bait, so to speak, and reacted to the jeers of the Benfica fans. Apparently he showed them the one-finger salute. But alas, it would appear UEFA weren't even aware of this indiscretion so perhaps he'll skate by without a punishment. Nevertheless, it was Benfica who started the brighter of the two sides, creating early chances and testing Cech and company in the first minute- including a shot directly on goal that David Luiz did his best to clear off the line. Chances continued to come on either side, with Chelsea using Ramires as a funnel for action down the right flank. A peach of an opportunity emerged from a dead ball when Juan Mata slipped past the sleeping Benfica defense, rounded the keeper and could only fire onto the post from an acute angle. I'll reserve any snark from that one seeing as how it was an absolute gilt-edged chance. Meanwhile, Benfica found space and began to look for cracks in the Chelsea back line, using set piece delivery to earn precious header opportunities. Two nervy moments of memory- Benfica cross from the left side, onto a free header that was hit straight at Cech who saved cleanly. Second, Ashley Cole had the luck of the Irish when he cleared a chance that could easily have wound up as an own-goal. The moment of truth emerged after Ramires, who ran all match long, persisted and delivered a pass to Fernando on the right touch, who turned on the jets and blasted past Benfica's marking, slowed to a pulse, and dropped an inch-perfect little cross onto the outstretched boot of Kalou. Goal.

The rest of the match saw Benfica toil in earnest, but in the end, Chelsea came away with a deserved victory. The defense, it has to be said again, were rock solid. Individual performances stand out of note including: Fernando, Ramires, Kalou, Mikel, Luiz, and most importantly Paulo. But as a team, Chelsea were well-drilled and very much on the same page. It may have taken 75 minutes but the breakthrough finally arrived and in convincing fashion. The only shame might have been that a second goal didn't come after Daniel Sturridge did well to break free in a five-on-two break, fed the ball to Mata who ... yeah, somehow failed to make the right pass. Nevertheless, the result sees Chelsea safely returning to the Bridge in control of the tie. On this evidence, it has to be said once more- Fernando deserves to start over Didier right now. No further explanation is necessary. Elsewhere, tremendous credit to David Luiz and Ramires who worked harder than anyone against their former squad. And finally, to Paulo Ferreira. I don't know where the hell you've been for the last few years, but if you have that capability still, then please continue to showcase that for us. It was an excellent evening that, after our consecutive poor performances in the League, will certainly boost our prospects going forward.

And by the way, looks like we'll be seeing Spurs again soon, after they advanced against Bolton to square the FA Cup semifinal draw.