Conventional wisdom suggests we either flame out in style, or rise to the occasion that awaits. I tend to be optimistic when it comes to matters of the heart, and therefore would assume Chelsea could meet expectations and deliver a rousing victory tomorrow. But consecutive poor displays- losing to Manchester City (deservedly) and toiling to a point with Tottenham (undeservedly)- seem to have evaporated all those good vibrations. The honeymoon is over, that brief but beautiful stretch when we played well seems to have vanished, and we're left with the same sinking ship Andre tried so desperately to steer back to shore. As disheartening as our last two performances have been, it's not all doom and gloom. More, after the jump: 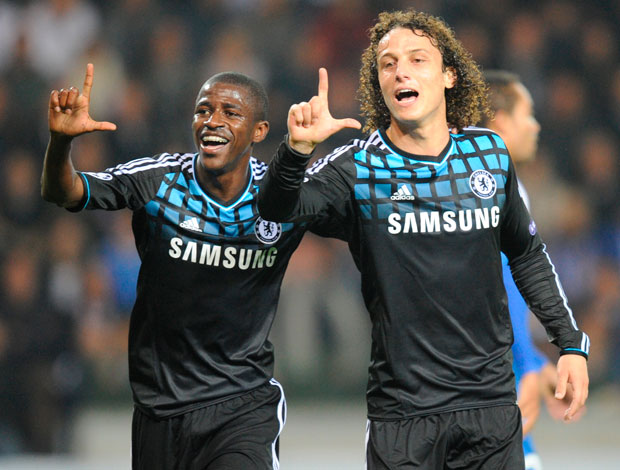 The last time we played in this competition, you know the deal. We rallied and produced a monumental result that stands to be one of the greatest nights in Chelsea history. Since then, we've dropped four points on the trot in the League. So while our ambitions for  fourth place seem to have died on the vine we remain in the hunt for that elusive Champions League victory. Though it might not seem a realistic route, the draw against Benfica certainly suggests otherwise. But be careful if you're planning to write them off as make-weights- they're no pushovers by any stretch. They're fast, attack-minded, and much like Napoli, a potent threat on the counter. On paper, we have the quality to see them off soundly, including the two players above who swapped sides over the last two years. On paper, we should win every match. In reality, we seem to toil endlessly. On to the specifics:

Why: Redundant. Win or face another yeoman task of staying alive. And really, we should be well past the point of worrying what version of our squad shows up to play. This far into a campaign, it's ridiculous that we're pining for consistency. If anything, we're consistently inconsistent. Sophisticated ignorance.

Them: Benfica used to boast the likes of Ramires, David Luiz, Angel di Maria, and Fabio Coentrao. The latter two ply their trade for Real Madrid, while the former pair are ours for keeps. So, you might gambit that Benfica (like most clubs in Europe) are a feeder for the major squads i.e. cultivating talent to sell to the highest bidder. This wouldn't be wrong per se, but it would be a touch simplistic to say it as such. After getting their proverbial asses waxed by a Porto-led AVB, Benfica went all H*A*M in investing in new players. This year, they sit a point out of the top of the table, and have quietly gone about their business in the CL. Sidenote: they don't lose at home, at all. Much like our Manchester squads, Benfica have only capitulated once this entire year on their turf. Fortress shit. Names you'll likely hear mentioned ad-nauseum include Oscar Cardozo, Pablo Aimar, Nicolas Gaitan, and longtime rumored Chelsea signing Axel Witsel. Gaitain, of the lost, poses the most problems. Keep him quiet and you stand a very good chance of cutting off Benfica's main supply line. Let him run rampant, and the very real prospect of falling behind early exists. I haven't watched enough of their matches this year to know the inner-workings of their side, but I do know they line up in a RDM style 4-2-3-1 double pivot. Missing for tomorrow are former Madristia Ezequiel Garay and Yannick Djalo- but neither figure to be major losses for Benfica. 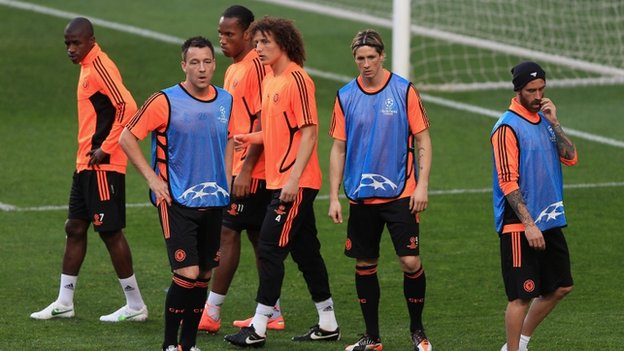 Us: At present, Chelsea are on the pitch, presumably working through their paces and preparing for tomorrow evening. But there's ample subtext to suggest this is anything but a routine exercise. The staff at large are facing widespread decisions as to who will get the call for an all important fixture that could define the outcome entirely. Fortunately, Branislav Ivanovic, he of Serbian lore, has travelled with the squad and looks set to reclaim his perch on the right side of defense. Otherwise, the squad is fully fit and at long last capable of presenting RDM and company with a selection 'nightmare'- although it seems a lot more cut and dry to me than this. The Tottenham draw might have been dire to witness, but did highlight the improved quality of our defensive core- particularly with Gary Cahill in the mix. While he's certainly played well over his last three matches, this one might have David Luiz written all over it. He appears the better player in building attacks from the back, and it would behoove Roberto to factor in his prior working relationship with the city/fans/players/staff when choosing his starting lineup. By the way, friends, we've yet to win on the road in the Champions League this year. Shit. 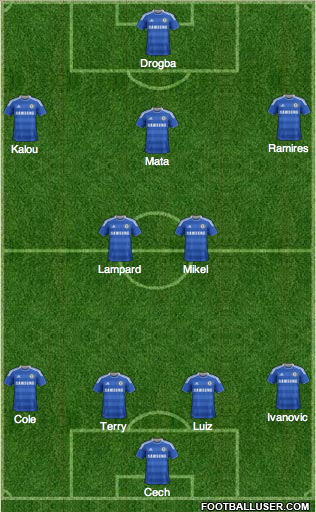 This is what I'm expecting. Starts for Luiz, Kalou, and Mikel. Ramires back on the right flank even though he seems to struggle in that slot, but he provides great speed to double back on the counter. The return of Ivanovic on the right flank and Didier up top- although I could easily see Fernando taking that slot. For the record, I wouldn't mind in the slightest if Nando-san got the nod over Drogs (he's been better over the last three matches). The 4-2-3-1 is a strong set-up but it will be cancelled out almost entirely by Benfica's like-minded set-up. Therefore, I'm expecting the emphasis tomorrow to be on control and slow/methodical build up rather than break-neck countering. If we're to take anything out of this match, then it behooves us to remove the element of the crowd immediately. Minus the services of Gary Cahill in the starting lineup means we'll be a bit less of a threat on set pieces, which could come back to haunt us. But I'm a sucker for a romantic reunion and I'd venture a Luiz and Ramires start is more than likely. I could just as easily see the likes of Essien, Malouda, and Sturridge in the starting lineup. Thus underscores the way we've performed in recent weeks/months. It's so up and down and chaotic that even the most ardent of fans can only gambit and suggestion as to what we'll look like.

Certainly, a win puts us in great shape going back to The Bridge, but a tie would be fine as well- provided we score on our side. Please, no dismal bore draws, again. Falling behind early would be a bad sign for our chances, so it will be paramount for the defense to continue its decent form (minus that meltdown in Manchester) and continue to clear the lines with aplomb. Also, don't know why, but I'm sensing an Ashely Cole performance tomorrow. It's been ages since we've seen one of those. Dude is due for a breakout. No time better than the present.