Pondering Chelsea, the race for fourth, and attracting top players

Share All sharing options for: Pondering Chelsea, the race for fourth, and attracting top players

With the 2-1 loss to Manchester City yesterday, Chelsea are in a bit of a precarious position. We now sit five points behind fourth place in the Premier League with only nine contests remaining. We trail both Tottenham and Arsenal in goal differential as well as total goal scoring, meaning we'll certainly have to outperform them both if we have any hopes of passing them in the table. With a head to head matchup against both of them, hope is certainly not lost. That said, this weekend's fixture against a struggling Spurs side is almost certainly a must win.

Should Chelsea falter and miss out on fourth (and not win the Champions League in the process), there are several fairly disappointing results that will follow. First and foremost, Chelsea will be stuck playing in the group stages of the Europa League next year. While that isn't necessarily the worst thing that could happen, it's certainly not the Champions League. The loss of Champions League money won't really hurt the club from a financial standpoint, but from an FFP accounting standpoint it would do some damage.

Chelsea missing the CL would also be a boost for Tottenham. Spurs have generally struggled to attract proven top players due to the fact that they had little chance of offering the Champions League, but qualifying twice in three seasons could really start to solidify their reputation. Where Liverpool is becoming a far less desirable destination due to their extended absence from the competition, Spurs becoming an occasional participant can only help their reputation.

There is one topic that's really been bugging me lately though, and I want to throw a quick rant out there and get it off my chest. Every time Chelsea drop points, some fans inevitably overreact. It's bound to happen, but one of the specific arguments I hear thrown around really bothers me. To put it bluntly, missing out on the Champions League next year will not stop Chelsea from being able to sign top players. I can't stress that enough. Missing out on the Champions League for a few years in succession would be a problem in that regard. Missing out on it for one season probably won't make potential targets even bat an eyelash. Here's why... 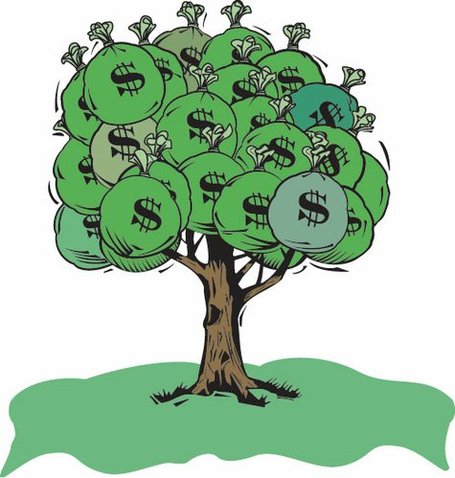 See that? That's the money tree growing on Roman Abramovich's yacht. Note that this particular money tree doesn't grow individual bills, it instead grows large bags of cash. Players like that. Players really like that. Clubs selling players also like that. Arsenal doesn't have one of these. Tottenham doesn't either. United? Nope. This is something worth noting.

Regardless of whether or not we finish in the top four this season, our wages will still be significantly better than either Spurs or Arsenal. That's not really a disputable concept, it's just a simple fact. We also still have more money than those clubs to spend on transfer fees, something that's also a simple fact. No matter where we finish this season, we'll still be one of the top paying clubs in the world.

That's not to say that we won't have players who want the Champions League immediately and rule Chelsea out because of that. There are players out there in the latter portion of their careers that are going to be looking for instant gratification. That's normal...as a guy starts to get older he's going to realize he has limited time left in the game. This may be enough to discourage the Modrics and Torres' of the world to go elsewhere. Oh well. Frankly, those aren't the players we should be targeting anyway.

Younger players generally don't need the type of instant gratification that older players do. They'll typically look at long term potential and, of course, money. Want some examples of this? Look back to the summer window and Javier Pastore. David Silva, Mario Balotelli, Edin Dzeko? None of them had the CL to look forward to immediately when they signed. I think it's safe to assume that every one of those players looked at the club they were joining and saw long term potential for regular Champions League appearances, and frankly nobody will be looking at Chelsea any differently. If anything, players like Pastore who were worried about playing regularly will see a much better opportunity than in years past.

There's obviously going to be some disappointment if Chelsea do in fact lose this weekend, but let's try to avoid overreaction around here. Take your time and think rationally. We all want Champions League action to look forward to next season, but everybody suffers disappointment from time to time. Should the worst case scenario unfold and we miss out on Europe's top competition, we may even lose out on a target or two. We will, however, still be quite desirable for the top young players on the planet. Sit back and enjoy the run-in, it really won't be the end of the world if we don't accomplish our goal. With that said, let's just beat the [fun] out of Spurs and Arsenal and make this whole rant pointless.