On Daniel Sturridge and "Selfishness"

Share All sharing options for: On Daniel Sturridge and "Selfishness"

It seems that Chelsea fans always need a whipping boy. Salomon Kalou, John Obi Mikel, Florent Malouda...it doesn't seem to matter how they actually play, they make excellent targets for fans criticism because they aren't superstars that have made up the core of our team for years. In that regard, Daniel Sturridge fits right in, and it seems to be a recent trend lately to criticize him for not passing on every occasion in which he shoots the ball. There was one occasion during the first half of our game this past Sunday that really bothered me, and the comment section in the game thread turned extremely anti-Sturridge at this point. Here's a screen cap of the chance in question: 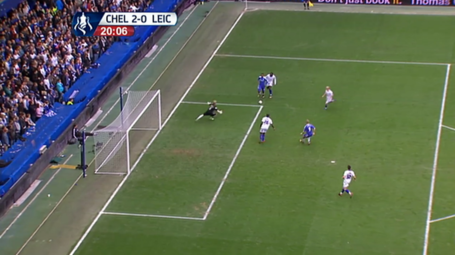 Look at what the match commentator had to say about the chance:

Sturridge is locked and loaded in his own mind, he's got nothing else going on but the back of the net.

Looking simply at this screen (and knowing that Danny's chip over the keeper eventually went wide), it would seem logical that Danny probably should have found Torres with a pass here. In my eyes, Danny really was set up where shooting was the only real option. After the jump we'll look at the play as it develops and I'll explain why.

The first screen I'm going to show you will give you a look at how the play was building up as Danny receives the ball. 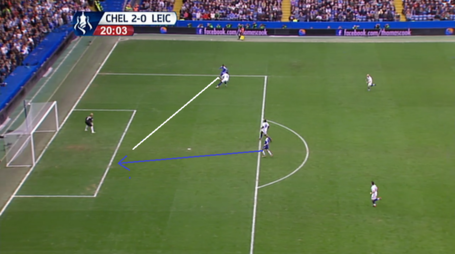 I've added two things to this particular screen. The first is a white line indicating the very simple pass Danny could have made to set up a golden opportunity. The second is a blue line indicating the far post run that would have given Danny a target for that particular ball slid through the box. That pass wasn't really an option though, as if you look closely you can see that Fernando Torres is already pulling up. Should Sturridge feed that pass through now, it will simply roll harmlessly out of play. Danny was actually in a very good position to see this and wisely did not attempt the pass. Here's the next screen in the buildup: 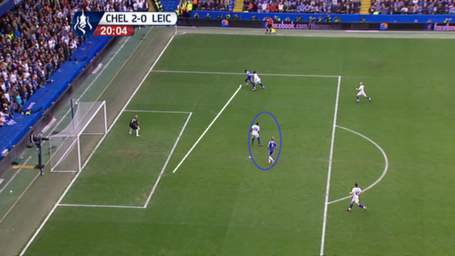 Danny dribbles past his defender, which is exactly what you'd ask a winger to do in that situation. By advancing the ball deeper into the box he allows Torres more options on where to run. Danny has once again opened up a perfect lane for a ball to be slid to a player making a far post run, and with the keeper defending the near post it would be an empty net to fire into. Fernando is not making the run though, and with him beginning to drift towards Danny you can see that there is no angle for a pass at this point. As of this moment, the best option for Sturridge is to drive at the keeper. 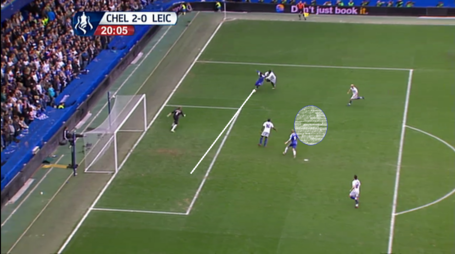 Danny has continued his run, and has now screened off the man responsible for marking him. He's still got a beautiful lane to slide it through to the far post, but as you can see there will be no run there. He's now got space to get the ball to Torres in the area I've highlighted, but is this honestly a better option than attacking the keeper himself? Danny is in a better position right now than Torres is moving to put himself in, especially as Danny's marker comes back into play with the dump pass. My vote...look to shoot. 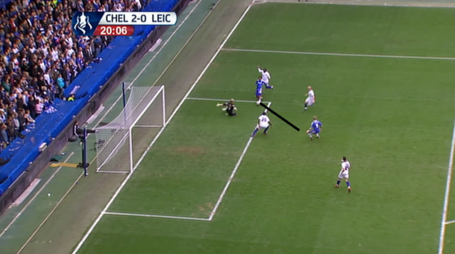 The defense has now committed to Danny's run. The keeper is commited. There is finally a clear passing lane to Torres where he's in a good shooting position. The problem? Danny is currently chipping the ball over the keeper. This was actually a fairly brilliant individual move by Sturridge if the ball hadn't rolled wide of the net. The revisionist will tell you he should have passed it though. 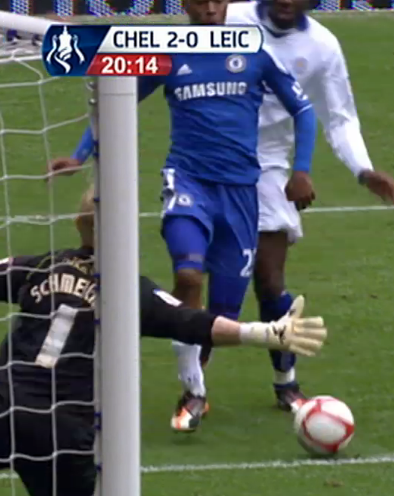 These are Danny's feet as Torres is finally coming open. The problem? He's already shooting. I suppose it's possible that he could stop shooting, take another step, and slide the ball over with his right foot, but that extra time will likely result in the ball rolling harmlessly into the onrushing keeper. The defender closing down the passing lane from the back will also likely have a good play on the ball at this point.

Danny shoots too often, I don't think there is any argument there. The fanbase is getting to the point, however, where they don't actually look at the situation anymore. If Danny shoots and misses, he's automatically criticized for his decision. This was no exception. The only problem...Danny did everything right here. Had Torres made the proper run and Danny not passed the ball there would be a legitimate gripe to be made. In this instance, that just wasn't the case. Sturridge did the right thing. Torres likely did not*. We as a fanbase need to realize that. When criticism is warranted it's certainly acceptable, but in the future we need to actually make sure it's warranted as opposed to berating him for doing the exact right things as the situation unfolded.

*Fernando had a very good game on the whole, there's no taking that away from him. This was an instance where he drifted back into his bad habit of making life difficult for the rest of the team to see what he's doing.