Gather 'round the stone for what promises to be a cracking match. With Chelsea on the ascendancy in recent weeks and City stumbling of late, it would appear that an odds-on favorite is hard to come by. Carlos Tevez might make his triumphant return, Di Matteo could extend his unbeaten run in Blue, and three critical points in deciding our final resting place hang in the balance. Injuries have deprived us of our Captain, but City will also be without the services of their leader. Hit the jump for details, and the like: 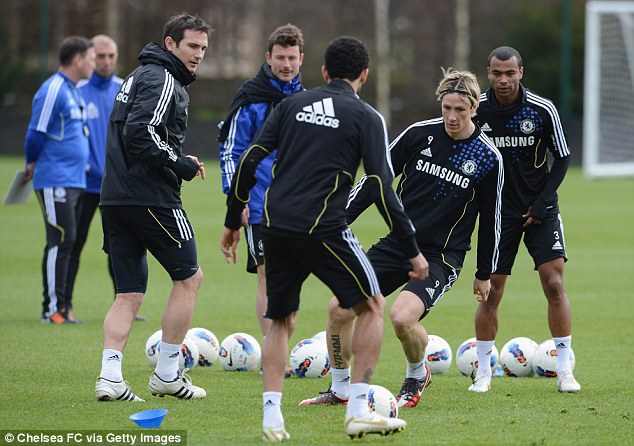 By last count, Chelsea have 10 remaining Premiership fixtures, from which a maximum 30 points seems terribly unrealistic. In the race for fourth, or third if you're that optimistic, the Blues cannot afford to forfeit points that come at a premium. Trailing Arsenal by three points currently while even on matches played, the pressure is immense to achieve a positive result tomorrow. All along, Bobby's been earnest in admitting that while it's certainly nice to continue to progress in our cup competitions, the focus has remained on securing Champions League football next season. Since taking the reigns, Di Matteo has endured only one PL match, a win over Stoke City- otherwise, he's navigated two wins in the FA Cup, and of course our triumphant comeback against Napoli. The work starts in earnest tomorrow as we begin the home-stretch of this campaign. On to the specifics:

Why: Points, my friends. We need the points. We crave the points. If we're to do anything substantial with this season, we need to continue in the upward trajectory of the last two weeks, and fire a warning shot to our rivals that we mean business. Our last great win under Andre's reign came against this very outfit, which saw us rally from behind to claim a hard-fought 2-1 victory at Stamford Bridge. We know we have the composite makeup to defeat City, and we've showcased an ability in recent days that our best form has not abandoned us. If we're at all serious about making a late charge for third place, then we need to commence by demonstrating our worth tomorrow afternoon. In a hostile environment, with expectations that we'll capitulate, Bobby is going to have to make some tough choices on who gets the nod. But all is clearly not awful at Cobham- our team is beginning to gel at long last, displaying an understanding and sense of chemistry that's been lost for stretches of the year. Our strikers seem to be finding their feet at precisely the right moment- leading to speculation as to who will get the nod. It will be difficult to decide who to play, for sure, but there exists the possibility that City will be without the services of two key players in the heart of their defense.

Them: If February was a great month in Manchester, March has been a turgid one. Two wins and two losses thus far, City are beginning to show the strain of an extended campaign in multiple competitions. Though they're replete with depth, it would appear that they've had some difficulties finding the net this month. Granted, every team goes through a stretch of this variety, so I wouldn't be daft to say they're going to be struggling for goals for long. When you employ the services of Kun Aguero, David Silva, Edin Dzeko, Carlos Tevez, et all, you'll never truly be struggling in that department. But, there are signs suggesting that wear-and-tear are getting to the squad. Losses to Sporting Lisbon (in the first leg and on aggregate) in the Europa League, coupled with a loss at Swansea have put the Citizens out of first place- and four points adrift. If they're serious about winning the League, they'll have to make up ground on United, who at present are four points adrift and in pole position. Therefore, it can be expected that City will present the most competent, and capable squad tomorrow evening. There are rumors suggesting that once-exiled, oft-maligned Carlos Tevez is in the frame to make his 'triumphant' return to the first team (after featuring twice for the reserves). I wouldn't be surprised if he was selected, but would be curious to see how he performs in his first genuine match in some six months.

Their injury list reads as such: Joleon Lescott is ruled out with a groin strain, Vincent Kompany is doubtful with a calf strain, while Gareth Barry and Pablo Zabaletta are both back in contention with Carlos Tevez. If it holds true that Kompany is to miss the match, then we can all rejoice in unison. Losing the heart of the defense, the bash brothers as they are, would imply that Stefan Savic and perhaps Kolo Toure will join forces in the middle of defense. That would bode well for our attacking unit, who would look to take advantage of the incredibly-shaky Savic and the yet-to-return-to-his-Arsenal-form-since-getting-pinched-for-popping-diet-pills-even-though-he's-a-devout-Musilm-man-and-would-never-willing-do-such-a-thing Toure. But even without these two in the picture, City still possess a wealth of talent that will be displayed across the pitch to provide enough steel and attacking prowess to test our defense. Whatever Mancini decides, and there exists a chance he puts his millions to work with Aguero-Dzeko-Tevez up top, with Nasri, Silva, and Toure forming a three-prong midfield, and a makeshift backline, Chelsea will have to be on their gallop tracking back to provide cover and swallow up the counter. City have won all their home games this year, and it's 19 total home wins since February of last year. Remember when we used to do things like this? Sigh. Bear in mind, City have not lost back-to-back Premier League matches since 2010- an impressive and truly daunting statistic. If there's any squad that has the mettle to do this (aside from United), in our current form it truly could be us.

Us: It's been confirmed by RDM that Chelsea will be without the services of John Terry and Oriol Romeu. The former should be back in time for the weekend visit of Spurs, while Romeu's absence continues to puzzle us all. Certainly losing John ahead of such a difficult away fixture is going to be a loss, but there exists hope that the budding partnership between Luiz & Cahill can provide adequate cover. Di Matteo did his best to shuffle the deck over the weekend, resting a number of key personnel, and utilizing his substitutions to great effect. The majority of the squad are fresh and ready for this one- which is an exciting prospect if I may say so myself. There exists healthy competition at long last for a number of key spots, though we can certainly include a number of names on the first-team sheet. We've been awful of late on the road (though a lot of that can be chalked up to the AVB-era) it remains that we're lost four in a row on our travels in the PL, with us failing to score goals in our last two outings. Chelsea will be itching to set the record straight with a complete display that will continue the momentum that has been rightfully cultivated from successive wins in all competition. Our most recent outing, a 5-2 victory over Leicester in the FA Cup, should provide inspiration and the notion that we can score goals at long last!

Tactically, once can assume that Bobby is going to employ his 4-2-3-1 shape, which appears to be working to great affect at the moment. But I'll insist once more, the greatest shift in style under Bobby compared to AVB has been the emphasis away from sticking to a rigid shape, and pursing a more forward-thinking style that is flexible and adaptive. Andre's reluctance to release the ropes on the squad might have constricted our style to an extent, but under RDM's guidance, Chelsea appear to have found a bit of verve in their gallop. A number of our recent goals have come from excellent set-piece delivery, utilizing the tremendous aerial gifts our squad possesses to great effect- it will be incumbent upon Chelsea to once again apply consistent pressure to Joe Hart and City's makeshift backline through this manner. Otherwise, I'd expect the aerial game to be a big feature- with Didier leading the line and taking service from the long-ball. As much as I silently loathe this style, it would be wise to employ it for stretches, particularly if Savic is found in a one-on-one scenario on Drogba's back. Speed will be a large component of this match, but more importantly, guile. If you're aiming to beat City on their turf, then possession and control are critical aspects. We've seen in years past how City can fly on a counter-attack and poach a goal from almost nothing. Staying disciplined, and more importantly, aware of marking responsibilities remains the paramount focus for tomorrow. 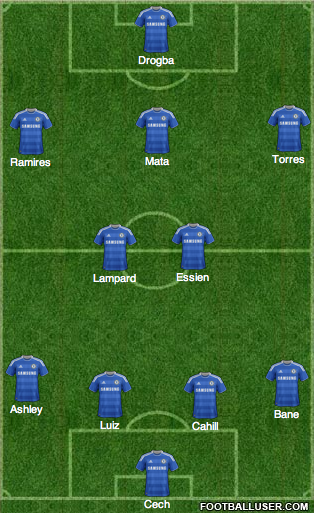 Some might be wondering why I left Daniel off the starting lineup. Simple, he hasn't been his best of late and quite honestly, he'll be looking for goals for himself rather than the team. It's been apparent in recent weeks that Daniel's struggles are continuing to mount, and I genuinely believe that he'll be attempting to conjure a few hero moments for himself rather than provide service for others. Fernando, who had a great outing against Leicester, has shown the pace necessary to play on the wing, and appears to be a better option for providing service via crosses than Danny. It's unconventional, sure, and I'm expecting to get plenty of flak for this decision. But Daniel would be more valuable as an impact-sub (along with Kalou) if we're chasing the game rather than a starter who will fade in influence as the match progresses. We've seen that Fernando needs to get a start in order for him to make a contribution of value, and based on his recent outing, it would be difficult to deny that he's deserving of a second start. The other ingredient to my choice? Big game experience. This will be the first genuine test of the Di Matteo era in the PL, and it's necessary to field a squad that can handle the pressure of playing away from home. Fernando, despite his issues with finding the net, never failed to work his socks off when given a chance. His pace seems to have returned, and he's growing more comfortable with working the angles on the run. Over the years, he's played many critical matches in England and Europe, and will not be fazed by the raucous home crowd. Danny, meanwhile, will be egged on by his former fans and no doubt have a few moments where he elects to go for the glory rather than make the easy play. It's part of his maturation that will ultimately take time, but for this match, I'd take Nando over Danny.

Options abound on the bench, with: Malouda, Kalou, Sturridge, Mikel, Meireles, Bosingwa, Hilario. We saw Flo perform admirably in the #10 role against Leicester, perhaps a spot he could find himself in again tomorrow. And for the record, as much stick as we give Malouda, I think it's safe to say he's a gamer and at this point, a genuine team player. No matter the spot or situation, he enters the fray and gives his absolute best. This match will come down to who takes advantages of their chances, so Chelsea will need to be patient and build chances (ideally to take the fans out of the game). An early goal would force City to chase the result (mind you, this is their catch-up game so to speak, so they'll be desperate for the three points to remain a single point off United for the PL crown). If we can remain vigilant in our defending responsibilities, while taking the space that City's backline provides, we have a shot of doing the business. A shot.