Chelsea's perfect record under Roberto di Matteo's management will get a stern test at the Etihad Stadium when they visit Manchester City. Having dropped from the top spot in recent weeks, the other Roberto's team no longer looks like the invincible goal machine that has steam-rolled over every team in their way, including the current league leader, for the majority of this season. The extent of their dip in form, perhaps, is best captured in their latest 1-0 league defeat to Swansea who were given a humbling welcome to the Premier League back in August by the Citizens in a 4-0 drubbing. With that in mind, I have looked into that defeat at Wales. My scout notes after the jump. 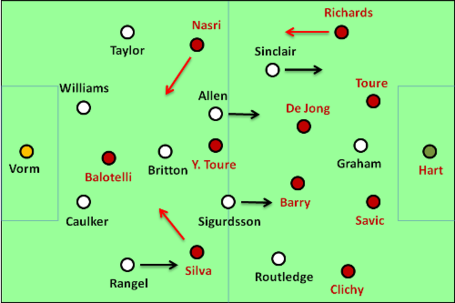 Mancini set out a 4-2-3-1 shape team with Balotelli as the main striker. Interestingly, Yaya Toure was used as the attacking midfielder in the hole while Silva and Nasri flanked the wings. A very defensive duo of De Jong and Barry sat in front of the defense that was missing both Kompany and Lescott. Kolo Toure and Savic paired up in City's central defense but they never looked very comfortable together -- Savic, especially, is prone making to errors. Most importantly for Chelsea, they are both very likely to start on Wednesday.

Both Aguero and Dzeko were on the bench, which meant that if Mancini wanted a more attacking lineup, he could have one of those strikers on the pitch in place of either De Jong or Barry while withdrawing Toure from the advance position (which was exactly what he did replacing Barry with Aguero 38 minutes in the game). But as it was, the Italian probably thought this starting eleven could do the job. In retrospect, Mancini may have overestimated his team's ability (or underestimated Swansea's).

Swansea took the field in a 4-3-3 formation with a midfield trio of Britton, Allen and Sigurdsson. Graham led the attack with Sinclair and Routledge in wing support. In terms of shape, the two teams were very balanced -- Swansea's inverted midfield triangle fitting City's upright midfield triangle like a glove. However, Brendan Rogers' team did not win this game by accident. They applied two strategies -- one proactive and another reactive -- successfully to seal this victory. Let's start with the proactive approach. 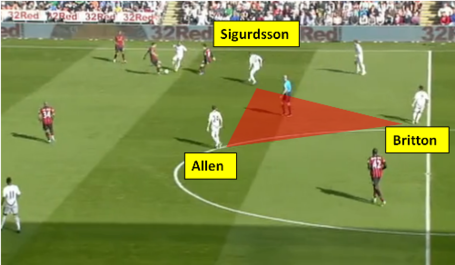 From the beginning, Swansea pressed aggressively, allowing City very little time on the ball. The likes of Allen Sigurdsson pushed high up the pitch when City had possession in the back. And very tight marking on Silva, Nasri and Yaya Toure meant that Barry and De Jong found it hard to move the attack forward. 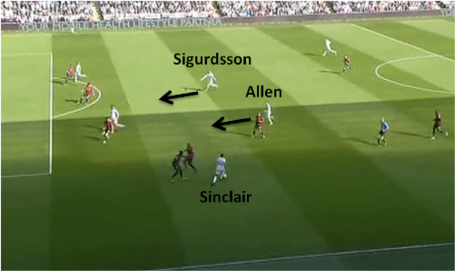 When they gained possession, Swansea broke quickly down the left with tricky and pacey Sinclair while Sigurdsson and Allen bombed forward to join the attack. City often got overrun by Swansea players in defensive zone due to the sheer speed of their attack. It was from one of these attack down the left that Swansea won a penalty in the first half. As he was running onto a through ball from Sinclair, Routledge was brought down by Hart. With the help of some mind games*, the England number one saved Sinclair's soft-ish spot kick.

* He seemed to have yelled out "Don't wait for me," (i.e. don't wait for him to dive to either side) as Sinclair was about to take the PK. I guess it worked.

Changes and the Crowded Center

One of the problems City was having in the early stages of the game was that they lacked width. Both Nasri and Silva are not true wingers and they like to cut into the center from their wide positions, crowding the center channel. The fullbacks can provide width in this scenario but Swansea's wingers tracked back and denied that option.

Mancini quickly realized that something needed to be changed and he brought on Aguero in place of Barry around the 38th minutes. Balotelli moved to the left flank as Aguero became the main striker. Yaya Toure dropped back into central midfield position as Nasri and Silva moved in and out of the hole. This change meant that City's had more bodies forward, pushing Swansea to defend deeper. City enjoyed a good possession of the ball but they weren't able to create that many clear cut chances. 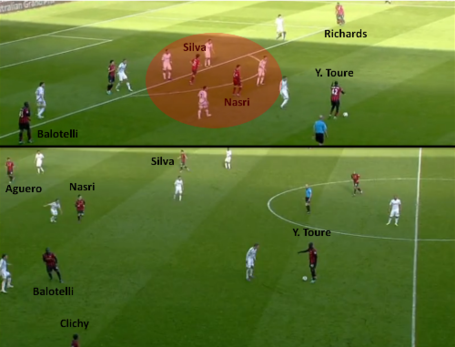 Balotelli provided better width on the left but the problem of crowded center still existed as Nasri and Silva found themselves in similar positions. Yaya Toure ended up seeing a lot of the ball. The Ivorian is a solid midfielder but he is not the player you will pick to unlock a stubborn defense from the midfield. Additionally, City lacked aerial presence in the box when they have possession in the wide areas. Let's say Balotelli and Clichy worked the ball on the left. When it's time to make a cross, they have the likes of Aguero, Nasri and Silva in the box. Mancini had options on the bench to solve these two problems -- Johnson for the lack of width and Dzeko for the aerial presence -- be he brought them on too late (84th minute and 87th minute respectively) have any kind of impact. From selections to substitutions, Mancini was found wanting in this defeat. 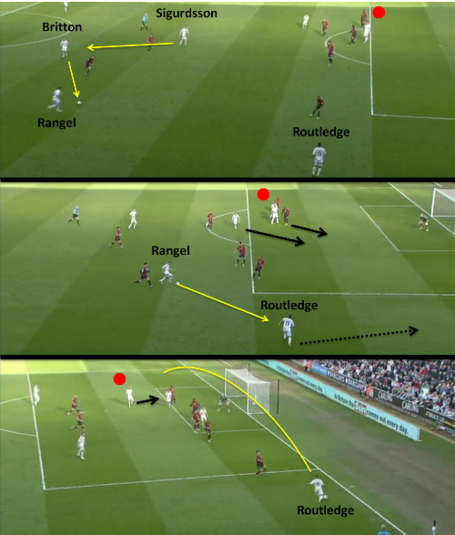 As I mentioned above, Swansea started this game proactively by pressing hard and creating chances down the left. But when City took charge in the later stages of the game, the Swans adapted to a reactive strategy -- staying compact and hitting City on the break. It was from a counter attack that Swansea scored their winning goal.

Sigurdsson won the ball around the halfway line as City looked to attack. City's initial defensive work slowed the counter attack down and they were able to regroup, but Swansea worked like a well-oiled machine to set Routledge free on the right flank. When the cross finally came in, Swansea substitute Moore (red dot), who was left completely unmarked in the box, scored with a strong header.

I guess the main takeaway point for Chelsea is that City aren't as good as they used to be. They look shaky when pressed in an organized manner and they are vulnerable to counter attacks during their dominance. Despite the talent they have in their hands, they still find it hard to break down some teams. In defense, they are feeling the absence of Kompany and Lescott. Yes, they have a 100% record at home but there is no better time to break that trend.