Notes On Josh McEachran From England U21 Vs. Belgium U21

Share All sharing options for: Notes On Josh McEachran From England U21 Vs. Belgium U21

Chelsea prospect Josh McEachran took a break from the rigours of club football at Swansea to step into the England u21 side on Wednesday. While many Blues were participating in international friendlies this week, McEachran's match mattered - England were playing a European Championship qualifier against Belgium. He didn't have to go up against Kevin de Bruyne, Romelu Lukaku or Thibaut Courtois, however, as Chelsea's young Belgian trio were playing with the seniors against Greece.

England lined up in a 4-2-3-1, with McEachran in the deeper midfield band. Partnering him, and captain for the night, was Liverpool's Jordan Henderson, fresh off a Carling Cup final win against Cardiff City. England ended up 4-0 winners, with Henri Lansbury scoring twice, Steven Caulker also netting and Alex Oxlade-Chamberlain converting a last-minute penalty. Let's take a look at the more important moments for Josh in this one.

1': McEachran's - and, indeed, England's - first contribution to the game is to win the ball. Belgium kick off, and Thibaut van Acker plays a neat flick to Gianni Bruno. McEachran was getting ready to close down van Acker, but he couldn't get anywhere close before the midfielder released the ball, so instead he decided to chase down Bruno. Here's what happened: 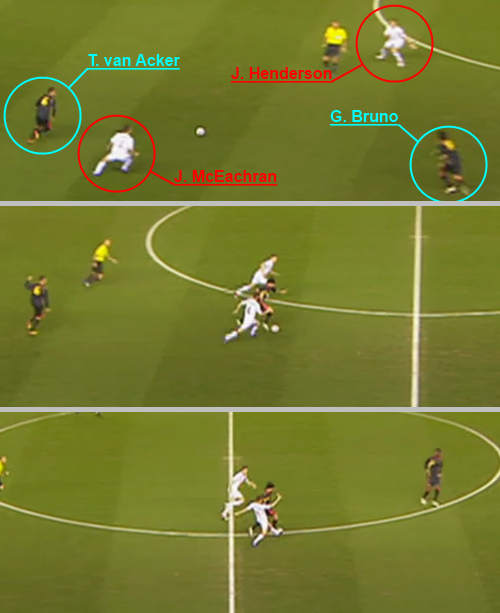 Yes, that's a successful tackle. A good start for Josh, considering that he isn't exactly notable for his defending just yet. England give the ball away right after that, but it's hardly Josh's fault.

3': Another successful tackle after Henderson gives the ball away in midfield. Nill de Pauw tries a driving run down the Belgian right but ends up overextending himself and letting McEachran nip the ball away, passing back to Henry Dawson. That's as many tackles as in his last two matches with Swansea combined, I think.

15': England have a corner on their right, and Josh ambles over to take it. He ends up playing it short to Crystal Palace's Wilifried Zaha who sends a cross in that's cleared for another corner. Josh plays it this time, a full length delivery into the box. Can he do any better than his senior Chelsea teammates? 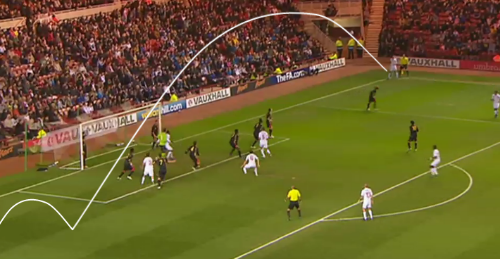 Er... no. Lansbury takes over corners from here on out. Chelseaitis strikes again!

17': A Lansbury corner is just as bad as McEachran's. Eventually, the ball comes to Zaha, whose attempted cross goes straight back to him. Pierre-Yves Ngawa tackles the winger this time as well but the ball pops out to McEachran who plays a lovely first time pass to Zaha.

It would have been much lovelier if Zaha had bothered to control it, of course, but we can't have everything, now can we?

23': Not a great minute for Josh. He completely misses a tackle on de Pauw, committing a foal in the process (it's waved off as de Puaw was able to continue running with the ball. McEachran then runs hard to cover as Belgium attack (hurray!), only to completely miss another tackle, this time a sliding effort, as he tries to stop the brilliantly-named Ziguy Badibanga at the top of the box. Not exactly great football there.

30': Much better from McEachran here. With Lansburg in possession on the England right and Oxlaide-Chamberlain dragging van Acker out of position, McEachran sees a big pocket of space open up in front of the Belgium defence. he raises his hand, receives the pass, and charges upfried before slipping the ball to Zaha, who eventually wins a corner. My favourite part of this move? As soon as he sees the ball is coming his way, Josh looks around for an outlet rather than just staring at the incoming pass.

41': Badibanga bursts into the England box and plays a one-two, with McEachran picking him up as he drives towards the byline. It looks like a difficult position to make up, but Josh does well here - at least, until it comes to actually blocking the cross. McEachran is too static and allows his opponent to lift a really, really dangerous ball over him, one that could easily have resulted in a goal if the Belgian forwards were in better positions.

49': McEachran takes a free kick from the England right. It's not a good delivery and ends up going straight to Keon Casteels in the Belgian goal. Poor from Josh.

55': And then brilliance. Blegium have a free kick that pinballs around the England box until it gets to McEachran, who with one touch plays a perfect and technically aerial pass to Zaha, leading an England breakout. That's just phenomenal transitional play, and given he had a fraction of a second to react to the ball getting to him, picking out a pass that superb is absolutely astonishing.

59': Not England's finest moment. After wonderful work by Danny Rose Zaha gets far too cute on a corner and allows Belgium to break. Badibanga gets past Henderson and plays a through ball to Bruno, who is at this point in line with McEachran. This sort of situation is a great opportunity to test a player's raw pace. Let's take a look at how Josh did: 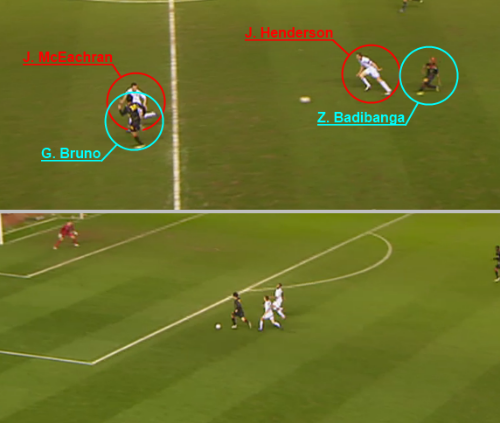 Not good. Fortunately, Rose was quick enough to put Bruno off and he shot wide. But yeah, McEachran isn't the speediest guy around.

75': By this point several substitutions had been made and McEachran appeared to be playing as a #10 in a 4-4-1-1, although England's shape really didn't make a lot of sense to me in the last 15 minutes or so. At any rate, being higher up the pitch meant that McEachran tried some more interesting passes. Here's one of them, an attempted pass to Marvin Sordell:

Unfortunately for England, McEachran played it far too close to Belgium left back Laurens de Bock (offscreen above) and he's able to cut it out.

89': And another one, to Gary Gardner that's intercepted by Dedryck Boyata:

I don't think this is quite as bad as a miss as it looks, because Boyata has positioned himself brilliantly to cut off the passing lane. To get it around the defender to Gardner, McEachran runs the risk of missing his run entirely and allowing Ngawa to intercept (see dashed line), although I'd still probably have gone for it - that's a 50-50 ball. The best possible pass here is a play through Boyata's legs, which is what I suspect he was gong for. Regardless, it didn't work.

90': It looks like McEachran made a goalline clearance on a Belgium corner kick, but slow-motion replays show that Gardner actually got to the ball before Josh did, deflecting the rather vicious shot by Musonda Lamisha shot over the bar. With his fist. No penalty, though.

92': So this is pretty awesome. McEachran is wandering around now that England have nothing in the way of a coherent shape, and he finds himself on the left. Josh is known for his passing, but it's his dribbling that serves him well here. He skips past Jens Naessens, avoids a slide tackle from van Acker, cuts around Ngawa's wrong-footed tackle and slips a pass to Will Keane inside the box. Neat stuff - it's a 50 yard run from the midfielder, and he makes everyone look silly.

All in all it was a solid display from McEachran, although he was never really tested much in a 4-0 win. He was restrained for most of the night, playing a few brilliant passes but also turning a couple of good through-ball situations into... less brilliant not-having-the-ball situations. Defensively, he did well against Bruno, but the Lille forward is tiny, so you'd expect Josh to at least be able to stand up to him. All in all, you'd have to be pretty pleased with the way things went for McEachran on Wednesday.