A night to remember. A moment to savor. A season to endure. More, after the jump: 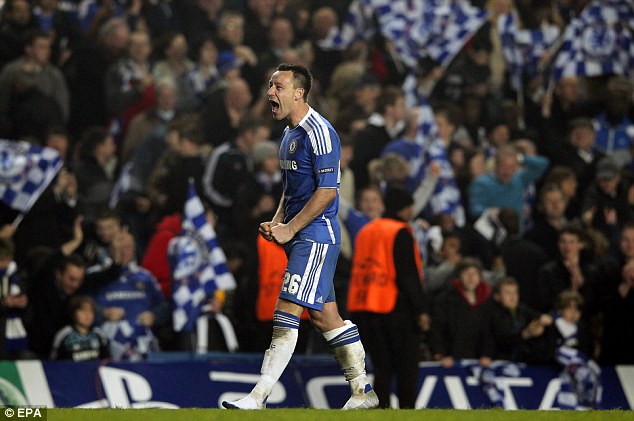 Twenty-four hours later, I'm still coming to grips with the realities that lay bare in front of us. The word epic gets bandied about far too often for incorrect situations, but it may well be the only apt adjective to truly describe what was an unforgettable night at The Bridge. Despite the odds heavily stacked against their favor, Chelsea somehow rolled-back the proverbial clock and delivered a stinging right hook to Napoli’s underdog darling ambitions. But this wasn't a match decided by tactics, so much as passion. From the opening whistle, the intent was visible on the faces of all those in Blue. They wanted it more. They were hungry. They were strong in the tackle, authoritative in the air, commanding on the ground, disruptive in defense, and forward-thinking with their movement. This was a squad clearly intent on proving a point. In many respects, it was Anti-AVB football (less emphasis on shape and tactics, more focus on discipline and movement). This was a match made of individuals that have, at times this year, been highlighted for single-mindedness and selfishness. Castigated, outcast, and subjected to scrutiny, this band of brothers stood together for two hours, and delivered a modern-day classic.

To summarize the match, at this point, would be moot. Plenty of people have gone to great lengths to give very detailed and explanatory descriptions of what transpired. If you missed it, shame on you. I for one, actually took a sick day to ensure I could witness this comeback. I had my measured belief that we stood a chance, but an outside one at that. Essential to our cause was nabbing an early goal, applying constant pressure, withstanding the waves of counter-attacks, staying disciplined on defense, and, fighting for every 50/50 chance. You do these things, and you win theoretically. But we couldn't rest on our laurels after Didier's scintillating header in the 28th minute. We had to continue pushing for a second, and plenty of credit has to be given to the shape employed (4-2-3-1). The system utilized, while identical to the one used by Andre in Naples, was executed with precision on this evening. Frank found himself alongside The Bison in the double pivot, which was a worry for some of us (seeing as how Frank typically produces more when he's further up the field). But on this day, he was more than up for the challenge. Elsewhere, Bobby chose to field Daniel on the right, Juan through the middle, and Ramires on the left- with the conventional wisdom that he would be able to keep pace with Maggio.

Key moments for us? Several, but just to name a few:

I've said this for months now- there will be a moment that occurs this year that will serve as a catalyst from which our march to the end will commence. Perhaps that single catalyst concept was flawed- in Chelsea's case it appears that our tipping point was a number of events that have combined to form this new dawn of sorts. Sure, we told you this would happen. We did. We said, in plain English mind, that after Andre got the chop we'd rally and go on a massive, confidence-boosting run through the campaign. We did. Don't believe us? Check for yourself. Yeah, we went there. And please understand, we're not trying to take any of the gloss off this win. It was massive on so many levels, inspiring, gut-wrenching, hard, and altogether gratifying. For fans, it was the perfect elixir to ail what's plagued us for weeks. For the players, vindication. For Di Matteo and company, well, just plain awesome when you consider it's his third official match in charge.

For all the stick we get in the press, and for all the negative that many tend to write about us, it remains clear that we are a team in transition. But on this night, it was less about the future and more about the present. With a result being paramount, Roberto relied on the names we've all come to adore, and they duly delivered. And please, lets clarify one key point- age is no factor at this stage in the game. Experience however, is what truly matters at this stage in the game. Gary Cahill might be flummoxed that he didn't get the nod for this one, but Roberto went with David Luiz and John, a partnership that has more than one game under its belt. And in Bob, we had a reliable foil to John's steely gait. It wasn't a perfect performance, but it was a battling one that saw tremendous individual efforts across the board. Ashley, who had himself a torrid time in the first leg, got into the mix, spraying passes across the park. Bane, after Maggio's removal, had a spring in his step and found plenty of space to venture forward. The Bison, who sluggishly walked through the first 45, grew in size and presence by the end of the match, even dropping into defense to cover for the injured Bob. Didier went up and snatched everything out of the skies, Frank showed up in all the right places, Mata drifted in and out of spaces, and came deep to collect the ball, while Ramires ran his socks off.

Credit to Napoli. They came into this match and gave us a hell of a fight. Conventional wisdom suggested they would opt for a more conservative approach, protect their lead, and cruise through to the quarterfinals. But this is Napoli, and that's just not how they roll. So, throwing caution to the wind, they ventured to play their style, and in fairness, it almost worked. I genuinely believe that Maggio's injury was the tide turning point in the match- had he remained, we might not have been so fortunate to net three more times. What's obvious, however, is this was an unorthodox European battle that had little tentative play, and more open end-to-end action. It was reckless, fast-paced, and at times a genuine blur. But I loved it. And I know you all did to. When was the last time we saw our Chelsea get on the gallop and run at teams. Jam the ball into the box, and slamming shots at the net? When, I ask? Under Carlo perhaps. It seems to be a long time coming since we had this kind of an outing, and it was well deserved.

Where we go from here? To the top, naturally. Just kidding, but hell, if we can bottle this performance and drink it weekly, there's no telling where we might end up. And yes, I saw you in the stands Roman. I saw you and Dasha. You looked bemused, then puzzled, then altogether thrilled. Your toys did this. Don't forget that fact. Now please, go give Didier an extension and lets get on with it, shall we?