An Illustrated Guide To Playing Center Forward By Didier Drogba: How To Play With Your Back To Goal

Share All sharing options for: An Illustrated Guide To Playing Center Forward By Didier Drogba: How To Play With Your Back To Goal

We showed you the brilliant run that led directly to the first goal yesterday, and today we're going to break down another component of Didier Drogba's beastlike performance from yesterday's victory over Napoli. Today we're going to break down three specific instances that caught my eye yesterday*. What each of these illustrates is Drogba's best attribute in my eyes...his unique ability to play with his back to goal. The Chelsea "old guard" have had the luxury of playing with Drogba for years and do an excellent job in playing with this style of player. Fernando Torres is an entirely different type of player, possibly helping to explain some of his difficulties adapting to Chelsea.

The first instance I'm going to break down for you yesterday was a typical long ball from Petr Cech. We've seen this type of play from Chelsea for years, so most of you should be very familiar. 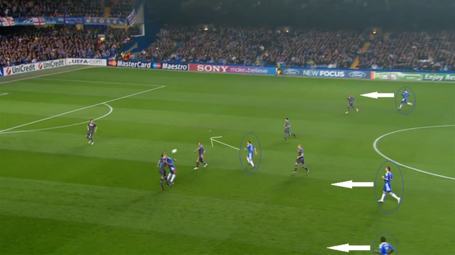 As the ball comes in to Drogba's chest, you can see the Chelsea attack is looking very organized. Drogba has no reason to try to take this ball to his own feet, he's got Juan Mata to his left to flick the ball to should he so choose as well as Frank Lampard and Ramires making forward runs with easy passing lanes. Daniel Sturridge is moving in the direction of the attack on the far right. Should Drogba choose the easy pass to Lampard (he does), Lamps will have his choice of passe to the central Mata, Ramires on the left, or Sturridge on the right. This is textbook direct play from Drogba, allowing the buildup to happen quickly and keeping the play in front of Lampard with lots of options.

The next instance I'm going to show you was our first real goal scoring opportunity of the game. We were awarded a throw about 40 yards from goal and Branislav Ivanovic decided to launch a long throw into the box. The screen you see below is the first good one that I found, but I've had to highlight the ball in orange due to the crowd in the background. 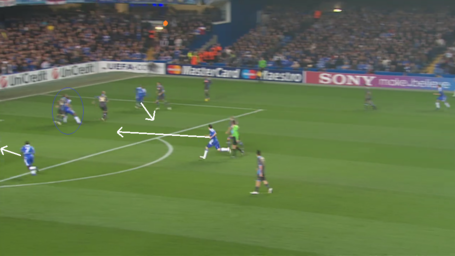 As you can see, Drogba is again manhandling his defender. The ball will come into Drogba's chest and he's got three teammates making perfect runs to compliment his holdup play. He'll choose to simply lay the ball off to Sturridge who is drifting into a brilliant position to shoot. Those two work well together...don't they? The next screen is mere seconds later as Daniel Sturridge is blasting his shot on goal. 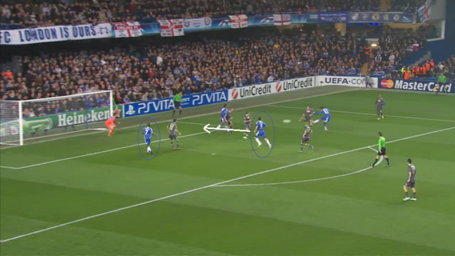 Sturridge lashed a vicious shot, but look at the runs continued by Lampard and Ramires. The keeper has one choice with the ball, he simply has to push it out for a corner. He can't do anything else or he risks leaving a rebound for one of the three Chelsea players lurking in the box. This was a real chance, and enough of these over the course of a game usually result in a goal or two.

The final instance we've got for you today was when we were 2-1 up but still needing a goal because of the aggregate score. Bran again had a throw in, this time from about level with the 18 yard box. Drogba has his defender eaten alive again (he's actually directly behind Drogs, he's just so out muscled you can't see him in this shot). I've again highlighted the ball in orange. 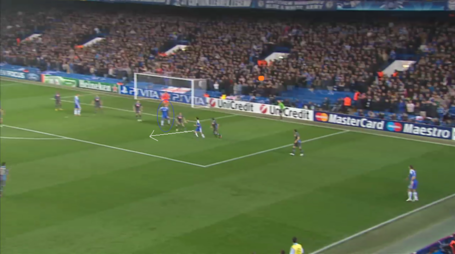 Drogba again has options, as Juan Mata is making a run much like Sturridge in the last frame and Frank Lampard is making a run at the far post (he's just off screen). I'm not sure what Drogba's plan was when he chests the ball, as he plays it in the general direction of Mata's run. It ends up right in front of him though, and Drogba decides to have a smash at the goal which was fantastically saved. 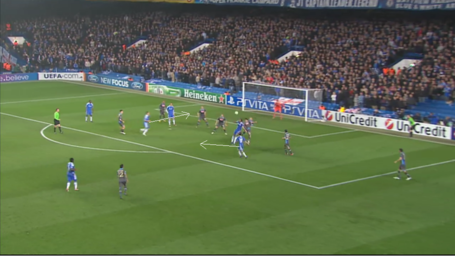 Once again, should the keeper do anything beyond pushing the ball out of play Chelsea are near certain to have a shot at the rebound. Another corner would come, and another chance had been created due to fantastic holdup play. One thing that does stand out from this instance is Fernando Torres lack of a move. He doesn't make a run as the throw is coming in, and he doesn't position himself to make a play for the potential rebound.

Examples like these should be pretty familiar to all of you as we've been seeing Drogba doing this for years. It's amazing how seamlessly the team seems to play off of this style though, they all seem to know exactly what is coming and make coordinated runs to take advantage. If the club continues to react like this to Drogba's holdup play we really should have no problem securing a top 4 finish, as this type of from can certainly beat anybody. I hope there's more of this to come from Drogs, and once again, I hope Romelu Lukaku was watching closely.