An Illustrated Guide To Playing Center Forward By Didier Drogba: The Goal Against Napoli

Share All sharing options for: An Illustrated Guide To Playing Center Forward By Didier Drogba: The Goal Against Napoli

I think it's safe to say we're all still on a bit of a high after today's victory. This was like watching Chelsea of two seasons ago again. One of the things we've been doing around here lately is breaking down the play of our center forwards. A look at some Fernando Torres mishaps can be found here (he admittedly played much better in his cameo today, but that will be for another post), and some brilliant work by RvP can be found here. Didier Drogba today put on an absolute clinic, so I'd be expecting to see a few of these in the coming days breaking down exactly what he did so well. We'll start with the obvious...the opening goal of the game. After the jump we'll see what Drogba did to create the space for Ramires to pass into*.

*My MS Paint skills are still not fantastic so I'll keep it simple. As you'll see, that's the key to this goal anyway...

Chelsea and Napoli had both created several chances at the point in the game when Drogba scored, but Didier had been showing quite a few signs of life throughout the first half hour of the match (hint...more on that later). As Chelsea played the ball into the attacking third for the goal, Juan Mata and Didier Drogba were located centrally with Ramires and Daniel Sturridge on either wing. Ashley Cole (with the ball) and Frank Lampard were positioned more centrally in support. Napoli had their central three deployed to cover neutralize Mata and Drogba, while both fullbacks were marking their respective wingers. The following screen capture will show you what I'm describing: 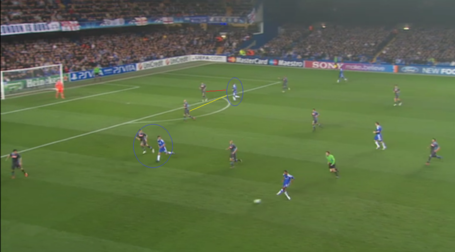 As you can see in the illustration, Mata is moving out to the wing to support Ramires (who is just off the screen). He is doing a nice job of dragging his defender with him. This leaves Drogba with two men to mark him, making a pass that much more difficult for Ramires (who is not normally a left wing). You can see the distance between both defenders marked, ideally Drogba will want to close the red line down and place him on his back while increasing the length of the yellow line. The next screen will show the movement as Ramires receives the ball: 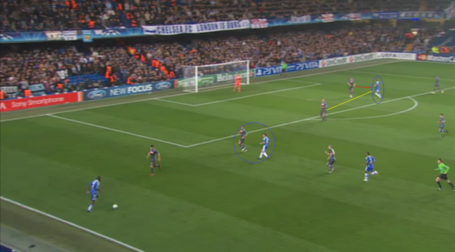 Ramires receives the ball from Cole and immediately looks centrally. The speed of his decision is a real key to the goal. Juan Mata is now heading in the direction of the corner, dragging his defender with him. Ashley Cole will make a run towards the box so his marker has a decision to make. You can see Drogba closing down the distance between the back defender, thus increasing the length of that yellow line we talked about. Ramires now has a much easier pass. 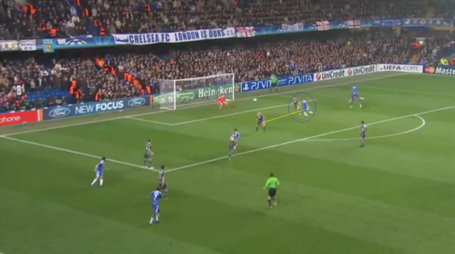 Ramires launches the cross into the center of the box, over the center defender and into a clear space. Because of the distance Drogba has created this cross does not have to be perfect to cause problems (it was awfully good though). Drogba has also now placed the other center back safely on his back shoulder, leaving him no choice but to go through Drogba to defend against the cross. Drogs is now free to make a diagonal run towards the near post and adjust to the flight of the ball. Once again, this perfect technique has allowed Ramires some margin for error. 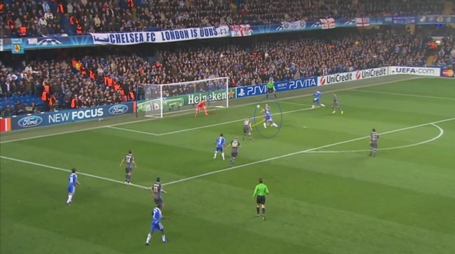 Drogba has now made his run to the ball, and the defenders are left helpless to stop him from getting a head on the ball. The ball is coming into the center of the box and Drogba has room to head to either post that he so chooses. He also has Ashley Cole (whom he can see) and Danny Sturridge (whom he cannot see) in perfect position to jump on a rebound. Because of this the keeper is left for dead in the center of the goal and has no prayer against a quality header, and we're still in exceptional shape to score should Drogba just force him to block the ball. It's fantastic team play all around, but Drogba's run is certainly the key. 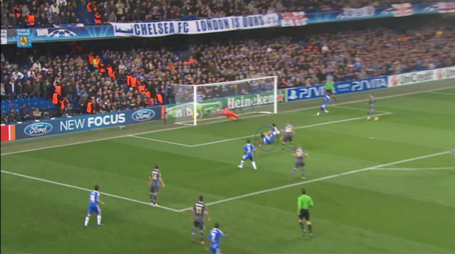 There were lot's of ways to expect a goal, but Drogba just decided to go ahead and place the ball perfectly into the side of the goal (circled in yellow). He opted for the side where he could see Ashley stalking, which was probably the right choice as well. All in all this is textbook center forward play, and he made Ramires' job easy (especially important since he's never played left wing before). One goal down for Chelsea, and the game now took an entirely different shape. This type of excellent and predictable run will help teammates immensly, when our guys do this we should have no issues scoring goals. Well done Didier, I hope Romelu Lukaku was watching.