Didier Drogba scored a landmark goal against Stoke City to bag all three points for the Blues. This was his 100th league goal and he became the first African player to achieve this record. For a player who has been a real professional for Chelsea on and off the pitch, this achievement is nothing less than Drogba deserves. A close look at the build-up of this goal shows that Drogba owes a lot to the movements and passes of his two midfielders -- Frank Lampard and Juan Mata. Second-by-second analysis of this milestone goal after the jump. 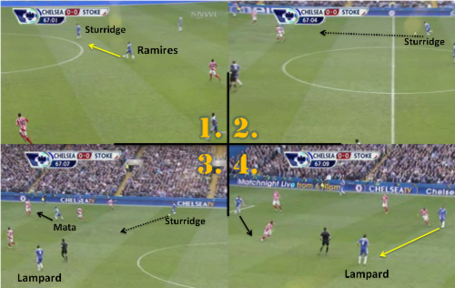 [67:03 – 67:08] Sturridge dribbles down the right and then cuts into the center; Mata makes a run to the right flank; Lampard is in a central position.

The video I used for this analysis (which I've downloaded from @AndyCarefree by the way) starts with Ramires carrying the ball from the back. At this point, we know that Sturridge has just come on replacing Mikel. Anyhow, I don't think anything interesting happened before Ramires getting the ball so I'm just going to start the analysis from here.

There are two interesting things to note. First is the amount of space Stoke has conceded at this stage of the game. With only 10 men, they have dropped really deep in their own half allowing Sturridge to dribble down the right flank with no obstacles. Second is Mata's movement. As Sturridge comes down the right, Mata moves to the flank in support, which is the right move. But when Sturridge cuts inside and passes to Lampard, the Spaniard smartly drops back into the center while Luiz pushes up the right flank. Great off the ball movement from Mata. 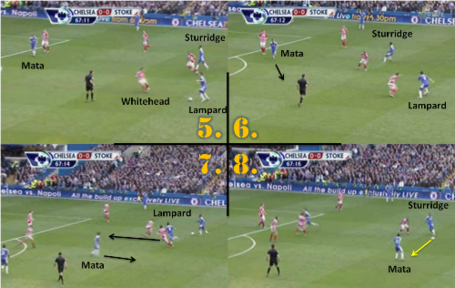 [67:12] Lampard considers his option on the left then decides to turn to the right; Mata starts to run back from his advance position.

[67:13] Lampard lays off to Sturridge then makes a run forward; Mata drops back into the space that Lampard has just left to support Sturridge.

Chelsea started the game with a 4-2-3-1 shape -- Lampard in the hole as Mikel and Meireles pair up in central midfield. When Mata was brought on for Meireles in the first half, Mikel was left pretty much on his own in central midfield as both Lampard and Mata operated in the advance position. This would not have worked out at all if Lampard and Mata didn't have a good understanding between them. For example, they could both make similar runs or get into each other's space or just crowd out the center channel. But that's not what happened.

They played off of each other's movement perfectly: one pushes on when the other drops back; one moves left when the other drags right (you will see this later); one creates space for another to exploit.

In terms of shape and positioning, frame 4 looks almost identical to frame 8, except that Lampard and Mata has switched positions. Nothing mind-blowing happened but because of this little midfield shuffle between the two, Mata in frame 8 has a little bit more time and space than Lampard did in frame 4. 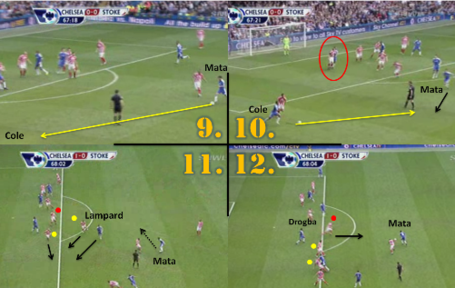 [67:22] Cole cuts back and passes back to Mata; Lampard is at the edge of the D; Drogba is tightly marked by Shawcross.

[67:23] As Mata is closed down, Lampard makes a diagonal run across to the left, dragging Whitehead and Wilkinson with him.

[67:25] Mata loses his marker with a quick move towards the center; Shawcross attempts to close Mata down.

Before I go on to talk about my favorite part of this whole build-up, let me just make a quick note about Cole. Not for the first time this season, Cole is one-on-one with the opposition defender when he receives a pass on the left wing. And yet again, he fails to do anything positive on his own and has to cut back to the center. From what we have seen in the past two games, Ivanovic, a center half turned right back, has more creativity and willingness to take on opponents than Cole does. Okay, now on to the good part.

Let's start with Drogba. The Ivorian has been marked pretty tight by Shawcross through out this build-up (red circle in frame 10). But as the ball comes back to Mata in the central area, Shawcross shifts back to the center leaving Drogba with Stoke right back at the time Wilkinson. Also note that the Chelsea striker hardly move at all in frame 11 and 12 as things get interesting. But he did well to stay on side while Lampard and Mata open up Stoke defense.

As Mata is closed down in frame 11, Lampard starts to run across to the left, dragging two defenders -- Whitehead and Wilkindon (yellow dots) -- a long with him. At the same time, Mata shifts gear and moves to his right -- (a) losing his immediate marker and (b) drawing Shawcross (red dot) out of the defense. Back in frame 11, there were four defenders between Drogba and the ball, but now in frame 12, there were only two who have left a huge gap between them. Stoke's compact defense curved out by the movements by Lampard and Mata. 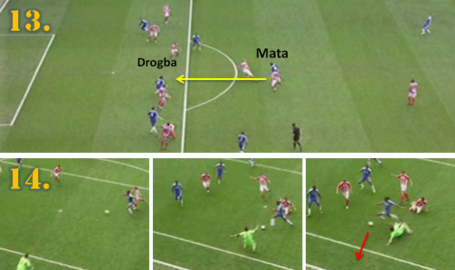 Then, Mata does what he does best and slips a through ball forward to Drogba who's on his own inside Stoke's box. Lampard and Mata have done a lot for this attacking move but Drogba still has a lot to do at this point. The striker's first touch sets the stage, his second takes the ball beyond advancing Begovic and his third finds the back of the net. An exquisite finish by the powerful forward.