In keeping with this weekend's Bloodsport theme, below Frank Dux reenacts Ricardo Fuller's malicious stamp on a Chong Li-played Branislav Ivanovic. A savage challenge it was, one deserving of a lengthy suspension to go along with the red card initially issued. Nastiness aside, we somehow managed to carve out a second consecutive win, Roberto Di Matteo's first in the Premier League for the club. Let's take a closer look at how we side-stepped a potential pitfall after the jump. 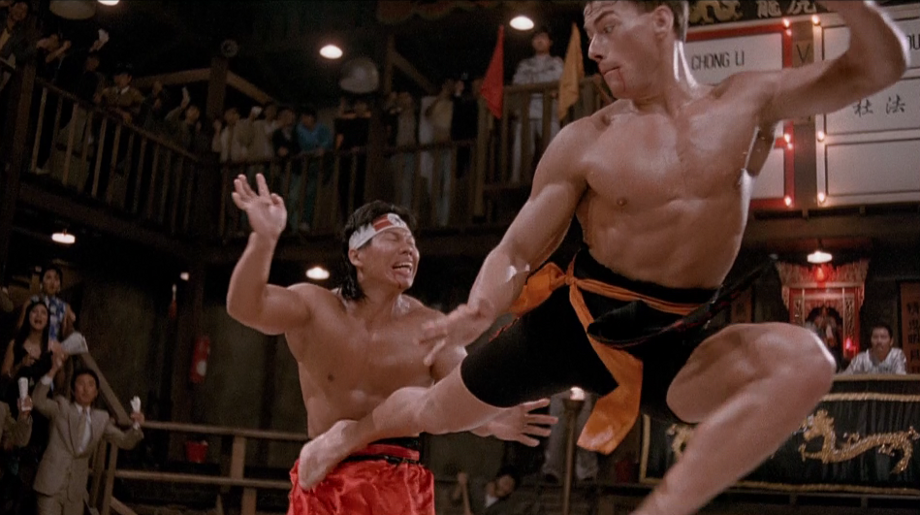 It wasn't easy, not that any of us thought it would be. In fact, Saturday's afternoon outing at Stamford Bridge proved to be a largely laborious affair. We struggled by and large to break down a disciplined Stoke side that played with 10 men for the better part of 65 minutes.

Were we poor? No, not exactly. There were chances (three rattling the goal) and, most vitally, there was patience in our buildup play - something that has been lacking in a most serious way this season. There was control of the midfield and some penetrative play. When was the last time we saw any of this? Still, the lack of real confidence remains noticeable. And goals, as they have been in 2012, weren't interested in showing up. Not at least until the 68th minute when a lovely threaded ball from Juan Mata, roaming just behind the penalty area, freed Didier Drogba to take flight in the center of the box. Drogba did the rest, skipping past the goalkeeper Asmir Begovic before slotting into an empty net.

It was a joyous occasion. For one, we needed a fucking goal. Not only did Drogs' calm finish hand Chelsea a deserved lead, but the strike was also his 100th Premier League goal. What an achievement for the man, on the club's birthday no less. Add to the mix the fact that Drogs' 34th birthday is to arrive on Sunday. Yeah, greatness all around.

Oddly we didn't really push on after the goal. I felt that, in a sense, we were too patient. Too conservative. There was the substitution of John Obi Mikel on 67 minutes that appeared to play a role in our shift from looking somewhat lively (albeit unsteady) to unbalanced. Sure we scored almost immediately after Daniel Sturridge came on for Mikel - and the England striker's threat likely helped free some room in which Drogba could work - but we also lost a lot of our control on the midfield at that point. I'm not questioning that bringing on another attacking player was a good call, but Mikel had a solid game and we probably needed to keep him in the mix at that stage of proceedings. It's a moot point at this point, though, so we'll move on.

I think what we all can agree on is that there was progress here. Perhaps not in sheer number of goals or attacking fluidity, but earlier in the season we would have dropped points in a match like this. How many times have wec conceded after taking a lead this year? Today we held it together and that, coupled with Spurs' loss at Everton and the potential for Arsenal to drop points against Newcastle, is one hell of a result for us. Baby steps, people.

"Sometimes during the season, you have to win like this. It's not always going to be easy or pretty. We scored goals against Bolton, for example, but sometimes you have to win a bit scrappy. It was a big goal for Didier and for the team. His contract is a club matter. Didier has been a tremendous player for this club.

Now, for a few choice nuggets:

• David Luiz doesn't work at right fullback. Bob looked lost after coming on at halftime for an injured Ivanovic. I don't remember him having even the slightest impact on the match. I recall him popping up on the right wing a couple of times, but showing little of the energy we're used to seeing. He may be one of our most natural footballers, but that doesn't mean he needs to post up at fullback. Get the man back in the center of defense.
• Speaking of central defense. Gary Cahill and John Terry made for a pretty stoic partnership on the day. I was impressed. There could be potential for these two, though, as you know, I prefer to see Bob partnering either of these two instead of these two partnering each other. Hell, at least we have proper depth at the position now.
• Crossing. Rubbish. We attempted 36 crosses today - yes, 36 - of which only six were successful. We had 14 corners, none of which produced a goal (though two probably should have). Someone explain to me why we were intent on looping aimless balls into the box from the flanks against a team with the size and aerial ability of Stoke City. A hopeless cause it was. Just look at how we scored for example.
• The goal came from smart, incisive play centrally. Mata roamed into space then slipped in Drogba. Simple. That's how we move forward. That or our fulllbacks/wingers learn to get to the byline and pull the ball back. How about both? I know that Di Matteo knows.
• Raul Meireles may have lasted on 38 minutes, but from what I saw, he was shit. I don't want to single him out because he did experienced something of a renaissance against Birmingham, but he was a nonfactor during his time on the pitch today. Not sure what the future holds for him at Chelsea.
• How awful was today's commentary? A lot of hate in the both. The color guy whose name escaped me is clearly not a happy man, something he continually reminded us of each time he rose up and roared from the heavens about how Di Matteo had lost the plot because he had not introduced a second striker yet. He went on and on and on and on and on about it. Even during the first half. Get this man a drink, please. Better yet, get him off the air.

So yeah, this Champion League return leg on Wednesday night against Napoli is shaping up to be fairly interesting, eh? Who knows what to expect from that one. Me, I really could care less. I just want to continue to see this team find traction as we chase UCL qualification for next season. Cool. That's all I have for now. We'll see you later on. Carefree.