Some Interesting Chelsea Facts And Figures

Share All sharing options for: Some Interesting Chelsea Facts And Figures

As most of you know, I'm in Holland at the moment, which means that weekend games don't start in the really early morning like I'm used to. Without matches to cover, I was left with not a whole lot to do when I woke up, so I decided to play with Excel. Here's what happened.

I went back and looked at all Chelsea Premier League matches this season, noting when goals were conceded and who was on the pitch at the time. Then... well, I wrote everything down. This sounds way less impressive now that I think about it, but I've been in a spreadsheet for the past four hours so my language centre appears to have shut down. Anyway, with this information you can determine how often Chelsea score and how often they concede with specific players in the game, which strikes me as probably useful. To the numbers! 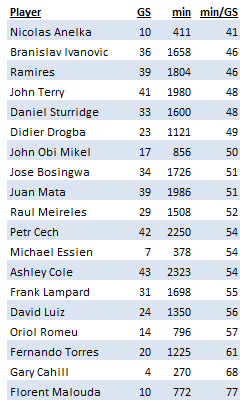 To the right is the goals scored tally. I've included minutes as well (via EPL index) so we can get a minutes per team goal scored for everyone, which should be fairly self explanatory. I also added a minutes qualifier - anyone under three full matches was discarded. Some quick observations:

Now let's look at goals conceded, with some more bullet points because I'm lazy like that. 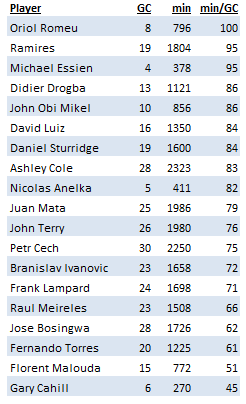