Share All sharing options for: England's Once Brave Loses Umbro, and Capello

Not exactly a great week if you're John Terry. More, after the jump: 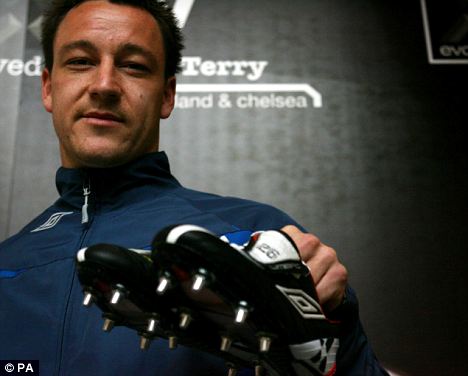 So if you're keeping score at home, that's Social Media Neophytes/Journo Hacks/Chelsea Naysayers 3, John Terry 0. First he lost the armband, which, in fairness many of us accepted with relative understanding. Sure, due process matters in regular affairs, but this is the England captaincy. Obviously, it's more important for the FA to step in before any legal proceedings occur and make a unilateral decision that presupposes guilt, right? Right? Apparently so.

Now, after crisis conversations with the FA, England manager Don Fabulous Fabio Capello has called time on his career managing the nation- a mere five months before Euro 2012 festivities commence. Talk about a disaster in the making. Fab was rightfully incensed by the decision for the FA to strip John of his captaincy, and publicly came out in defense of the embattled John. More so, he made repeated remarks that regardless of who was now selected, John would remain in 'his eyes' the one true captain of the squad. But don't worry people. Fabio's gone now- which means, John is in effect about to call time on his England career.

And now Umbro, kit sponsor for the national side, has dropped John from their endorsement portfolio. Seems being associated with a someone that's committed a potential injustice of this magnitude is bad for business sales. Because clearly, people will not buy England kits if John's wearing one. Right. Because never before in the history of professional sports has an athlete been accused of a crime, not found to be guilty or innocent, and lost all of his sponsors. That happens all the time, correct?

I'm surly about this, but then again I'm not. I think it's high time John (and Frank for that matter) hang their boots up and call time on their England careers. It's been tempestuous, up-and-down, and all over the map in terms of success. There's no reason for them to continue risking their longevity for a country that seems to prefer needless mind games and incendiary tactics that suggest players are of little importance in regard to the governing body. Nevermind the effort these two have demonstrated each time they've worn the white stripe, it's all good and well. Time to put it in the past and move on.

John, don't sweat it. Just let them appoint Uncle 'Arry, retire from international competitions, and watch England wallow over the summer from Fabio's villa in Corsica. It's more fun that way, I swear.