What was a dream at 3-0 quickly morphed into a nightmare near full time for the Chels, as Manchester United - with a helping hand from good friend Howard Webb - clawed back to secure a 3-3 draw in a breathless encounter at Stamford Bridge on Sunday. 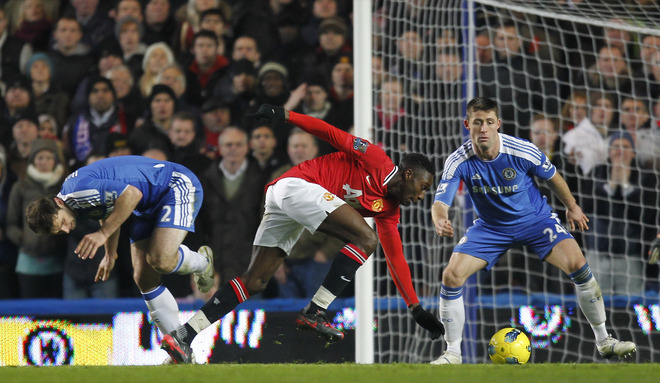 Fuck the Super Bowl. Today's finest athletic fare was on display brunch time across the pond.

It was an odd old game, with United playing some excellent attacking football at times and Chelsea looking irresistible in patches. The match was also careless, sloppy and largely stop-start - thanks again to Howard Webb. Both teams were damn near atrocious with their passing during the opening half, too. But, damn, was it entertaining. Even for a Chelsea supporter, this has to be considered one of the matches of the season.

Yes, I'm still pissed. But I'm also not daft enough to suggest that wasn't a proper advert for the sport in these United States. I just hope people were watching.

As for the match itself in regard to Chelsea, there was encouragement in several facets. To start, who here actually would have taken a point from that match considering our form leading into the game? Consider our list of absentees before answering: Once-England's Brave John Terry, Ashley Cole, Didier Drogba, Salomon Kalou, Frank Lampard, Ramires and John Obi Mikel. Sure United are down a plethora of elite talent as well, but they also haven't been playing quite as poorly as we have of late.

So, with all that being said, would you have taken a point? I know I would have. I also know that I would not have minded one bit had the match been postponed because of inclement weather. So, right out of the blocks, it's a positive result. Maybe not as positive when looking back on how the match played out, but positive nonetheless. Let's try to keep that in perspective going forward.

Other encouraging facets included:
• 4-2-3-1. No more need be said.
• Juan Mata in the hole. He looked reborn, as if the fatigue we've been discussing in recent weeks was no longer a factor. And that volley, wow. Probably going to be our goal of the season.
• This new-look double pivot of Michael Essien and Raul Meireles. Very promising. How long has it been since we saw Essien look that dynamic? I don't think he even looked that good at the beginning of last season. He really dictated play in midfield during the opening half. And Meireles, well he responded to our various criticisms with a composed display.
• Jose Bosingwa. As I remarked prior to the start of the match: "Bos to pull off a blinder like he did at Spurs. A boy can dream, right?" It was no dream, my friends. Bosingwa was locktight for the most part. I think a lot of that had to do with the formation, which saw Florent Malouda on the left rather than Mata, whose defensive workrate is not nearly as high as Flo's.
• Gary Cahill. He shut a lot of us up, including me, with what was generally a very good performance. It remains to be seen whether he can put in a consistent shift like that but it was no doubt a great debut.
• David Luiz. How good could this kid be? Yeah, he made a couple of mistakes but his overall contribution was immense. Not sure how many better offensively-gifted central defenders there are in world football.
• Bane. Killed it.

Now, for some discussion on the penalty incidents.

The first arrived inside 12 minutes when every United supporter except Webb was certain Cahill had fouled Danny Welbeck in the penalty area. A penalty and red card at least, they're saying. Not so much. After 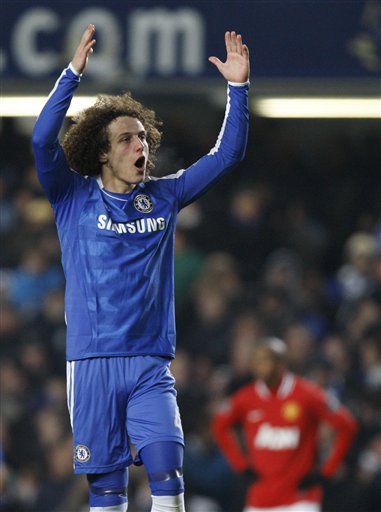 probably a dozen replays via my DVR, it's clear that the challenge occurs outside the box. I'm not even sure it's a foul; if anything, there's slight contact with the ball initially and, while Cahill does take Welbeck's legs, it's well after the ball has gone. Never a red card, either, as David Luiz was in position to make a defensive play had Welbeck remained on his feet.

The second, on 57 minutes, sees Patrice Evra make an overlapping run into space down the left side. Ryan Giggs plays a quality ball into that space, leaving Evra alone with Daniel Sturridge. As Sturridge was preparing to make a play for the ball, Evra jumped in front of him to shield and Sturridge made contact with the fullback's right foot. A soft penalty, as Evra leaped in front of Studge, but I've seen them given so I'll let it pass.

The third, meanwhile, after 68 minutes, was just garbage. Wayne Rooney, freed by the introduction of Paul Scholes, saw Chicharito's right-to-left run through the middle toward the left of the box. The run, an excellent one, obviously drew attention, specifically from Cahill, Luiz and Bosingwa. Ivanovic, tracking back, nicked the ball of Chicha but it trickled to Welbeck on the right of the D. Welbeck allowed the ball to run across his body onto his right foot and, as Bane was pulling out of his challenge, Welbeck let his trailing left leg run into Ivanovic, allowing gravity to do the rest. It was basically a slip and fall, of no one's fault but Welbeck's. Granted Webb was in a poor position, behind the play, but that lends itself to even more criticism of the official. You can't make that call.

And, finally, I'd like to discuss what has been a largely debated aspect of the game amongst Chelsea supporters - Andre Villas-Boas' decision to pull Sturridge and replace him with our young Spanish defensive midfielder Oriol Romeu.

Many are suggesting this was a tactical gaffe that cost us the match. I fail to see how that's the case considering, for one, we had at least one dodgy penalty awarded against us, and, second, we had more legitimate scoring chances than United during Romeu's time on the pitch. Plus, you know, that's kind of what managers do - attempt to sure it up defensively after a concession of goals.

But let's focus on the chances created. That's right, we had more than United. They had possession, sure, but we were fairly incisive when we had the ball. Over the final 20 minutes, we created six excellent scoring opportunities compared to the visitors' three, two of which arrived during the same move.

Want a rundown? Here you go:

• 74min: A Romeu giveaway leads to Little Pea lashing a low drive just wide of the far post from the right side of the box.
• 76min: Malouda picks out Torres in the middle of the box, who chests down and lays back for Essien. The Bison then, in space, wallops an Alex-esque strike toward goal that David De Gea barely sees but still manages to punch over his crossbar.
• 77min: Ivanovic heads on for Torres, who breaks into the box thanks to a cool chest and header down into his path. Goal at his mercy. Torres, however, does a Torres, attempting to cut the ball back onto his left foot. Chance vanishes.
77min: Mata tees up Malouda in the center of the pitch, 25 yards out. The Frenchman had all the time in the world to pick his spot, with Evans and Valencia tentative to come out to him, but can only whip a well-struck effort a yard over the bar. Had De Gea worried.
84min: Brilliant counter. Valencia runs the length of the field, picking up a return pass from Welbeck and then finding Rooney in the center of the box. Rooney forces solid save out of Cech.
84min: Giggs latches onto Cech's save and lofts a great ball into the center for Hernandez. Cech gets a hand to Chicha's header, but it's far too good an effort to keep out. Looking at the replay of the goal, it appears that Romeu is the one caught out of position. Luiz is marking the back post, in the vicinity of Welbeck, while Cahill is guarding the near post. Romeu, meanwhile, is ball watching. All he really had to do was track the run and it would have been an easy clear.
87min: Malouda finds Meireles in the center of the box, six yards out, but the mohawked one can't keep his header down despite the fact that his marker, Evra, was falling down behind him. Great chance, terrible header.
91min: Mata unleashes an unbelievable 25-yard free kick that forces De Gea into what likely will be honored as the save of the season. Sensational play from both parties.
94min: Cahill sends a swerving pile driver toward the top left corner that De Gea manages to bat away.

Conclusions? Romeu made some mistakes. He was nowhere near the level we've come to expect from him. But I don't think his introduction, and the subsequent tactical changes that accompanied it, had a fatal effect on our performance.

To sum it all up? How about flawed but encouraging. There's plenty to build on; there's also plenty to forget. What we can't do is let the way United rallied cloud our judgement. This was a pretty good result. We showed a lot of promise, sans a few dire moments in the early stages. If we take that second-half mentality with us to Goodison, we're going to be fine.

Let's just hope the boys choose to build on this result rather than succumb to it.