Fernando Torres Vs. Didier Drogba: Some Thoughts And Analysis

Share All sharing options for: Fernando Torres Vs. Didier Drogba: Some Thoughts And Analysis

There's been a lot of fighting debate over the merits of Fernando Torres and Didier Drogba recently. Torres has been the subject of some bitter complaints over his inability to score goals, and despite him registering nine assists in all competitions this season he hasn't scored enough goals to get the fans on his side. The job of a centre forward, or so it is said, is to score goals.

I'm going to contest that assertion. In my opinion, the job of a football player is to help his team win, and although that might be the 10,000 foot view, it have help us to actually look at productivity if we frame our questions properly. In general, I don't think too many would disagree with me if I say that the job of a centre forward is to help his team score as many goals as possible. This, incidentally, is one of the key elements Didier Drogba brings to the team - his ability to work with Daniel Sturridge is hugely important, and Sturridge is still yet to score a league goal when Torres starts.

If we look at Chelsea's goals scored output, we get this. With Drogba, they've scored 21 goals in 11 matches. With Torres, it's 18 in 11. Anelka's started one match, with two goals scored there, and Andre Villas-Boas has plumped for a two-man strike partnership once, against Norwich, a game which featured three goals. Based on the raw data and discarding the two matches where the Blues didn't play one of the two big names as a lone central forward, having Drogba start is worth almost 0.3 goals per game - or more ten goals over the course of a season.

That number is big. Using our standard goal differential to points conversion of 0.645, fielding Drogba instead of Torres for a full season is worth almost seven points. It's also unfair in two ways. Playing time has been close to a 50/50 split, with Drogba playing more when he's available, and we're only about two-thirds of the way through our season. Using Drogba in all of the matches Torres has started gives us about two points more than our current total - enough to make a difference as we try to close down Tottenham Hotspur, but not a huge one.

The second way it's unfair to Torres is even more problematic. The data we have is inherently flawed. We don't know the overall quality of the defences both strikers have faced, and there might be an unfair home/away distribution in there as well, which could be worth a full 0.5 goal swing with a particularly unfortunate distribution. We've encountered this problem previously, of course, and it's not that difficult to solve - we generate expected goals by looking at the opposition's defence compared to Chelsea's attack, modify by the relative potency of our attack* and then apply home advantage. We call this figure expected goals (xG).

*Despite many complaints this year, the offence is still 30% above Premier League average.

At this point, we can then look at individual matches and see if we over or underperformed. Here's a chart showing goals (G) minus xG for the 2011/12 season so far: 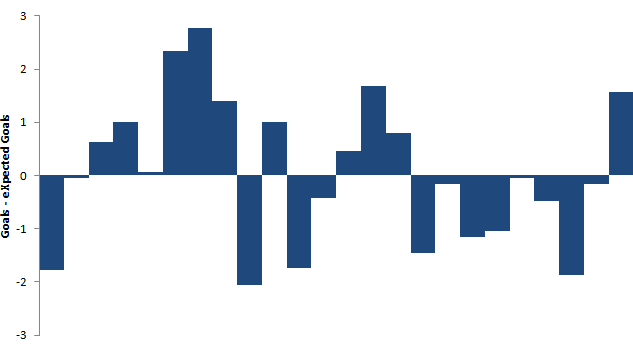 As you can see, the Manchester United match broke an eight game slump in which the attack has underperformed, starting from the 1-1 draw with Wigan Athletic at the DW Stadium. Obviously, much of that streak has occured while Didier Drogba's been away at the Africa Cup of Nations. What happens when we take a look at who started at centre forward in each match on top of this information? 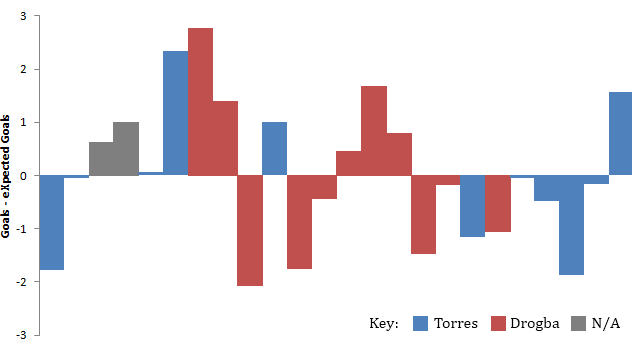 This is a mess. There's no obvious pattern here. Drogba's been involved in both our worst game of the season by this metric (the 1-0 loss to Queens Park Rangers at Loftus Road) and the best (5-1 vs. Bolton Wanderers at the Reebok), but this really does not show a major difference between what the attack has done in terms of Drogba starts vs. Torres ones. On average, Chelsea perform score 0.07 goals less with Torres starting than with Drogba, a number that's small enough that had The Miss at Old Trafford not occured, the two would be dead even.

If we go back to our points analysis above, the figure drops by a silly degree - if we start Drogba in place of everyone's favourite Spanish punching bag , we get 0.77 goals, which is equivalent to almost exactly half a point. That's not something to get worked up over, especially when a) we regress the numbers like we should and b) we remember that Drogba has actually been directly involved (three goals, one assist) in fewer goals than his blonde counterpart (two, three).

So, there are the facts for the season so far. It's not conclusive, but it's strong indication that the fight between Team Torres and Team Drogba is, ultimately, much ado about nothing. The Blues might have a problem at centre forward - this analysis certainly doesn't say anything about how good both players are, but it appears that there's not a whole lot to separate the two supposed big guns.

NB: It make strike some readers as unfair that I used only league games in this analysis, which leaves, for example, Chelsea's 3-0 win against Valencia out of the picture. It's much easier to run this sort of test on the Premier League, where all the teams are playing each other many times, than it is to do it on, say, the FA Cup or UEFA Champions League Group E. A quick scan of the data seems to slightly favour Torres in the games missing, at any rate, but it's probably not enough to make a difference.