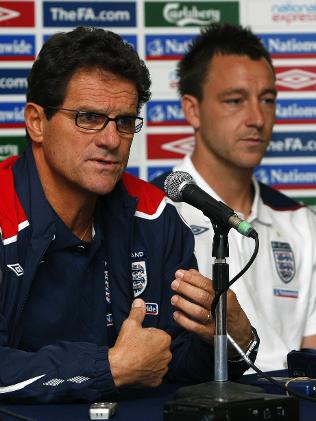 This certainly isn't going to go down that well with the FA.

England manager Fabio Capello laid out his thoughts on John Terry and the FA's decision to strip him of the England captaincy to Italian broadcaster Rai 1 today. To say he's not pleased with what has transpired would be a gross understatement.

I completely disagree with the FA about the John Terry decision and I have told that to the chairman. The court will decide. It's going to be civil justice, not sports justice, to decide if John Terry committed that crime that he is accused of. I considered and still consider Terry as the England captain. I think we first should wait for the trial conclusion.

Damn. Capello's opinion displays just how much turmoil there is within the England camp at the moment. As pointed out by me earlier in the week, the FA's decision may have been correct, but it was made at the wrong time and with absolutely no foresight. So, moving forward, we have an England team with an angry manager and a captain not yet named who isn't really going to be the captain anyway.

England are in predictable shape then, eh?