Groundhog Day Tactics - Stop Me Before I Cross Again!

Share All sharing options for: Groundhog Day Tactics - Stop Me Before I Cross Again!

I was in the Virgin Islands once. I met a girl. We ate lobster, drank piña coladas. At sunset, we made love like sea otters. *That* was a pretty good day. Why couldn't I get *that* day over, and over, and over?!

If there is one thing that stood out to me from the match stats from that abject failure of a performance at Swansea, it was the number of crosses attempted by our Blue-clad chumps. 43 in total. Forty-three. If you're not impressed by that number, think about it this way: that's about 1 lumped ball into the penalty box for every single minute of actual Chelsea possession (54% possession, minus some fudge factor for when the play was out of play, etc, etc).

So, forty-three. And what did all that lovely English strategy get us? A nice big bouquet of a dozen roses. A lucky deflection. Nothing. And before you slag off on the Portuguese Defensive Liability (pictured), know that Juan Mata led the way with 14 of them lovely balls (just as he's led us all season).

Forty-three. A new record for the AVB regime...but more worryingly, just more symptoms of the recent Disease of Xtreme Crossing that has reared its ugly head in the camp. Three of the four highest crossing efforts of the season have come in the last 5 matches: @ Swansea (43), @ Norwich (40), v. Aston Villa (39). We haven't seen numbers like that since early season (40 v. WBA; 38 v. Leverkusen; 37 v. Norwich)...and at least back then we got the results to go our way. (FA Cup & Carling Cup matches are not included here, by the way, as no such data is available for them.)

With that in mind, let's take a look at how crosses correlate with goals scored. Are crosses (or even crossing ability by wide players) something we should be striving for? Or are they more a sign of a team bereft of ideas, launching hopeful ball after hopeful ball?

(I should warn you that I have no delusions of this being an exhaustive analysis by any stretch of the imagination. And, if you're coming from Graham's post-match analysis post, you might want to brace yourself for the precipitous drop in quality. Moving on...)

The average number of crosses per match attempted by Chelsea is right around 25. If you exclude the six matches where we did not win the possession battle (and thus can argue that we weren't really playing the "AVB-way"; let's call this default from here on), you arrive at almost exactly 26. Let's see how that looks when broken down by goals scored:

Well, how about that! It certainly appears that we score more goals when we cross less. Or...we cross less when we score more goals. Or...perhaps when we're not scoring enough, and teams are packing their defensive area, we get frustrated and resort to the simple solution of a crossed ball. Perhaps that's due to lack of creativity (obligatory 'lack-of-creativity' mention - check!). Perhaps it's due to a lack of effective directness. Arguing cause-n-effect here may be as fruitless as arguing whether Fernando Torres struggles due to lack of supply (obligatory Torres mention - check!). I don't have an answer for all this...but the data paints a clear picture: 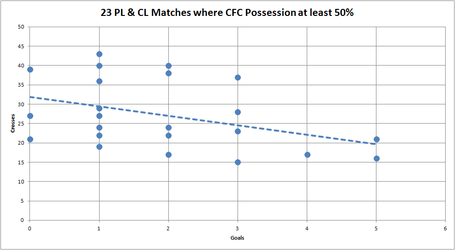 It certainly appears that we don't have much to lose by not crossing the ball too often. Versus Manchester City, after they were reduced to 10 men, AVB praised the team for staying patient and passing it around the horn, looking and probing for opportunities. We ended that match with 22 crosses, below the season average. Sure sounds like a better option to me than the constant din of the aerial blitz, into the box from out wide, only to end in disappointment and further frustration.

Some of this may be entirely too obvious. Clearly, we don't really have that prototypical center forward...or even just a player who may WANT to get on the end of a cross...yet we often insist on launching them just the same. Is it any wonder then that teams who have figured this out defend a certain way against us? They pack the box, force us wide and we duly oblige by taking the route of least profitability - even the best crossers in the Premier League barely crack 30% with their success/accuracy percentages (compare Mata at 26.5%, best of the frequent crossers on Chelsea). Boom, goes the cross, consigning another attack to failure.

And on a related note...instead of the "easy" option, how about we try more...THROUGH BALLS! Now there's a thought to gird the loins of Torres, no? And certainly anybody else who wants to score a fair few for Chelsea: 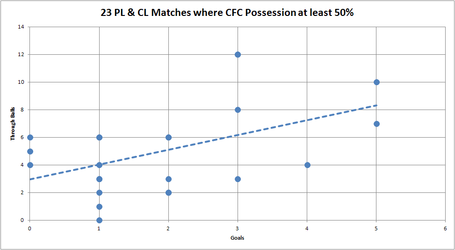 (stats courtesy of whoscored.com and the StatsZone (Opta) app)

(opening quote courtesy of Groundhog Day and Bill Murray; if you haven't seen it, watch it!)