It's been a while since I've done one of these, and I'm out of practice. As a result this isn't quite as polished or as in depth as I'd like considering the time it's taken to put it together. Regardless, I've been studying Swansea City vs. Chelsea, and have a few general points I'd like to make (along with some nifty graphs). Formation chart after the jump...

Chelsea started lined up in the standard 4-3-3 (1-2), with a front three of Juan Mata, Fernando Torres and Daniel Sturridge and a midfield consisting of Florent Malouda, Raul Meireles and Oriol Romeu. That setup probably wasn't the one Andre Villas-Boas would have fielded in an ideal world, but injuries and Africa Cup of Nations absences meant he was basically forced into it - the only viable change would have been to switch into a 4-2-3-1 with Malouda playing wide left and Mata in the centre.

Swansea more or less matched the shape, going 4-3-3 (2-1) with Leon Britton and Joe Allen anchoring their midfield. Scott Sinclair was advanced very high on the left, with Nathan Dyer a little bit withdrawn as right forward, with Danny Graham in between. Gylfi Sigurdsson, on loan from TSG Hoffenheim, sat behind the centre forward. The back four was pretty typical, with Angel Rangel higher up the pitch as a right back than Neil Taylor was on the left.

After a disappointing half, Villas-Boas shifted things around, moving Juan Mata central and Florent Malouda to the left - more on Malouda later - in a 4-2-3-1. Pulling a midfielder deeper, combined with Brendan Rodger's decision to commit to a defensive block rather than coming out and attacking, allowed Chelsea an escape route when pressured in possession for most of the second half. Despite the resultant attacking play from the Blues lacking any kind of thrust, the fact that Chelsea had possession for almost the entirety of the second half would eventually tell, with Jose Bosingwa scoring an equaliser that was somehow both inevitable and entirely undeserved.

Chelsea were much improved with the double pivot, especially when Michael Essien was introduced for Oriol Romeu with half an hour to go (Romeu, due to his defensive tendencies, isn't particularly well suited to making good use of a the 4-2-3-1). Surprisingly, considering the obvious benefits of fielding Juan Mata in the hole behind Fernando Torres, the improvement wasn't driven by the advanced central players. Instead, it was the midfield duo who were the biggest beneficiaries - Raul Meireles in particular. 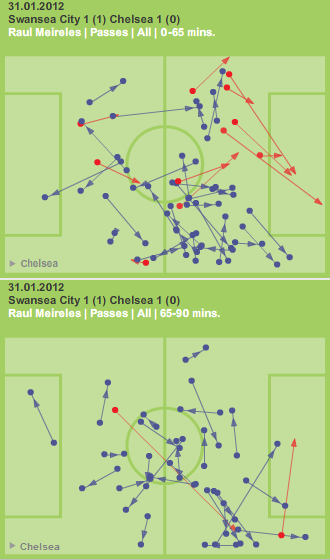 Raul Meireles has been played all over the place for club and country, and although a few recent poor performances have left him in the doghouse for many Chelsea fans, he's a midfielder capable of filling in anywhere in a central three or as a distributor in the second band of a 4-2-3-1.

Against Swansea, Meireles was terrible for the first half, mediocre until Michael Essien came on, and then superb. The numbers are spectacular - check out the bullet points below.

Those are crazy figures, and the fact that Meireles ended up attempting so many passes after being placed alongside the Bison means that we can't just wave the improvement away with a small sample size argument.

Why? The obvious reason is the space the Portuguese was allowed while accompanying Essien in the centre. In the first half, while Swansea were pressing, Meireles tended to receive the ball fairly close to the Swansea midfield and then immediately get pounced on by Joe Allen. After the switch, Kemy Agustien - not noted for his defensive ability - was the Swansea midfielder furthest forward, and he had to divide his time between Essien, who's impossible for one player to deal with when he's on his game anyway, and Meireles, who basically enjoyed the freedom of Liberty Stadium to build up Chelsea attacks.

It should be noted that this is not an endorsement of Meireles, especially considering his recent form. He failed to deal with the press and was rightly criticised for being awful in the match. It is, however, important to note that our opinion of a player's performance is influenced strongly by the situation we put said player in - had both sides played the post 65-minute system for the entire match, Meireles would have been a strong man of the match candidate.

A Tale Of Two Halves

With Swansea going into halftime 1-0 and comfortably the better team, Brendan Rodgers made the odd-seeming choice to pull back and defend a 1-0 lead. Perhaps he was feeling confident that minimal defensive effort could keep a lacklustre Chelsea off the board, or perhaps he was worried about Swansea's effort levels after a press-heavy first half that had the Blues scurrying for cover.

In reality, the home side's domination in the first half didn't amount to very much. They had one clear-cut chance to score thanks to an odd sequence in which neither Petr Cech nor Branislav Ivanovic dealt with a long ball forward by Angel Rangel, which ultimately required two goal-line clearances for Chelsea to escape, and their actual goal came from an outstanding volley by former Chelsea man Scott Sinclair in a situation that was dangerous but by no means likely to result in a goal.

This was a match devoid of clear-cut chances, and so it made some sense for Rodgers to pull his men deeper and defend the lead. However, doing that allowed a shaken Chelsea to regroup and play reasonably well, and it's pretty obvious in retrospect that that decision didn't work out very well. After the match Andre Villas-Boas described the way events unfolded at the Liberty Stadium:

In the second half we were very competent and pressed hard. The first half was the opposite, we conceded the initiative, although the goal came in a period when we were beginning to get things right, but we made a mistake from the set play.

It's important to praise Swansea, though, we conceded space in the first half and they are excellent at finding the gaps and playing through teams.

It's interesting how such a strong tactician as Villas-Boas discusses the halves in terms of what Chelsea did while giving Swansea lip service - Brendan Rodgers could have given us almost exactly the same quote (although with the halves flipped, obviously). Looking at the numbers, if you combined Chelsea's first half and Swansea's second, you end up with a total of 409 attempted passes (Chelsea tried 215 passes in the first half, Swansea 194 in the second). The other way around? 641.

Both teams defended very well when the other was in the ascendancy. The centre back partnership of David Luiz and Branislav Ivanovic contained Danny Graham, and Gylfi Sigurdsson, marshalled by Oriol Romeu, was nowhere near at his best. At the other end of the pitch, Swansea's centre backs did a superb job of forcing Chelsea players outside and into pointless crosses that the forwards were unable to chase, although they were aided by poor performances for Daniel Sturridge (who completely failed to make the necessary runs) and Juan Mata, who had a rare off night.

With Michael Essien unavailable for the full 90 minutes and Ramires, Frank Lampard and John Obi Mikel injured, Andre Villas-Boas had little option but to field Florent Malouda, who is a left forward, in central midfield. This is a situation reminiscent of Carlo Ancelotti having to play Yuri Zhirkov, a left-sided utility player, in the centre, and had much the same result - fairly miserable failure.

When you place wide players in the centre, they tend to drift wide. In this case, we got an overload on the left while vacating the centre, leaving Raul Meireles to basically deal with Joe Allen and Leon Britton, two very competent players, on his own. Malouda stationing himself on the flank rather than in the middle of the pitch also impeded on Juan Mata's position. For the most part, Malouda seemed to think he was playing left forward, and thus ended up making runs other players were trying. Check out his passing map:

Malouda received the ball in the left third of the pitch 39 times. He picked the ball up in the centre six times. Granted, he was shifted to the left wing during the formation switch at halftime, but those are still inexcusable numbers for someone who's ostensibly a midfielder in a 4-3-3. Presumably, Andre Villas-Boas shifting to a 4-2-3-1 at halftime was partially motivated by having two left wingers on the pitch at once, one of whom* who would happily play in the centre if asked.

*Hint: It's not Malouda.

It's difficult to overstate how rough things get when a central player isn't doing his job. Without Malouda pressuing Britton, Raul Meireles was incapable of preventing Swansea's deeper midfielders from dictating play, and when Chelsea had the ball they found themselves outnumbered in the centre as well, which is one of the reasons their passing was so bad. It wasn't until Mata came into the middle that the Blues could exert control of the match, and although this coincides with Swansea's pace dropping off, it's a demonstration of the simple fact that teams do better when players sit where they're supposed to.

Considering that Malouda was struggling when he was pretending to be a left winger, it's no surprise that those struggles continued into the second half. However, since he was isolated on the left side he was less of a burden on overall team play - Swansea couldn't exploit the space he should have been occupying. Small victories, I suppose?

All in all, it was a very odd match. You don't often see so much possession without clear-cut chances in a game that doesn't involve Arsenal, but neither Chelsea nor Swansea did a particularly good job of translating control of the game into actual attacks. Both sets of centre backs played superbly, and it's telling that it took a wonder-goal from Scott Sinclair and a lucky deflection for either side to get on the scoresheet.

It seems quite clear that the Florent Malouda as central midfielder experiment has not only failed but was also a primary driver behind Chelsea's poor play. Their inability to control the centre in the first half of the match contributed strongly to the impression that it was an incredibly poor performance by the team, and much of that can be attributed to Malouda's inability to stay in his position.

This doesn't excuse the sloppy play that characterised the first fifteen minutes of the match from pretty much everyone further upfield than Oriol Romeu, of course, but it's definitely worth noting - Chelsea weren't good against Swansea, but they were pretty clearly being dragged down by someone who should not have been playing where he was.

Fortunately, Andre Villas-Boas recognised this deficiency and corrected it. Hopefully he can avoid making the same mistake again. If Malouda starts, he must start as a left winger. To think otherwise is a recipe for disaster.

PS: I wanted to touch on the fullback play as well, but didn't get around to it. Jose Bosingwa was much better than he was given credit for.