Share All sharing options for: Dissecting Lampard's Goal against Bolton

Out of the three goals scored against Bolton last Saturday, Lampard's goal was the only one that resulted directly from a patient build-up. The ball moved from one side of the pitch to the other before Gary Cahill made a penetrating pass forward into the run of Ramires. Let's look at the build-up closely, shall we? 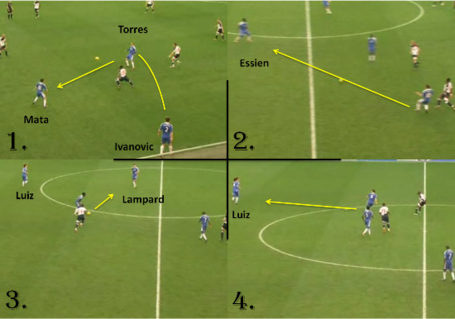 [77:40] Essien squares it to Lampard in the center circle.

[77:43] Lampard passes back to Luiz and moves forward.

Not much to say in these four frames here. The Blues are 2-0 up at this point, so there was no need for them to hurry up and push the ball forward aggressively. The shape in midfield was very tight -- Essien, Lampard and Ramires forming a nice little triangle for the ball to move around. Finally, Luiz got the ball and Chelsea's point of attack switched from right to left. 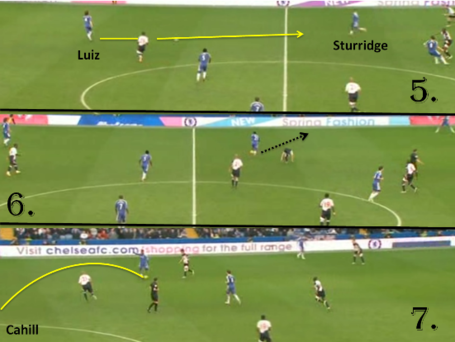 [77:45] Luiz finds Sturridge who drops back from the left wing.

[77:47] Sturridge turns and dribbles towards the touch line.

[77:54] Sturridge cuts back and makes a long pass across to Cahill.

At this point in the game, Sturridge had switched flanks with Mata. He dropped deep to get the pass from Luiz while Cole stayed pretty high up the pitch. Ultimately, Bolton were doing a good job defending on the left, forcing Sturridge to switch the point of attack back to the right side. I think his intention was to pass the ball back to Ramires around the center circle but there was too much in the pass and it went to Cahill. 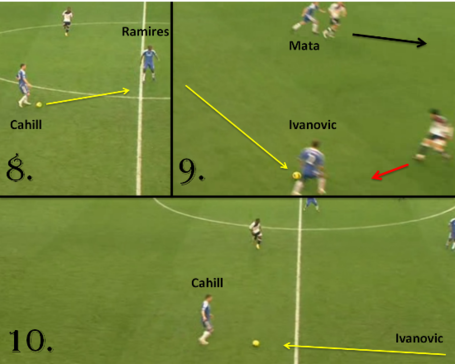 [77:58] Cahill pushes the ball forward to Ramires in the center circle.

[78:03] Ramires passes to Ivanovic on the right; Mata and Lampard runs forward.

[78:06] Ivanovic passes back to Cahill; Torres drops deeper, dragging Bolton center back with him.

Yet another attempt to move the ball forward came back to a defender because Bolton were doing a solid job marking Chelsea players. But the breakthrough came as the result of Torres' movement. 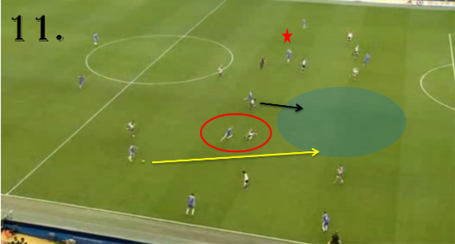 [78:10] Cahill dribbles forward and makes a through pass into Ramires' run.

Torres, in red circle, created a hole in Bolton's defense by dropping deep into midfield (the Spaniard was almost in a straight line with Ivanovic, Ramires, Lampard* and Cole). Cahill saw Ramires' movement and slipped a clever through ball for Ramires to run onto. And this is where Bolton's defense started to fall apart.

* Goal scorer Lampard has been marked with red star from frame 11 through 14. 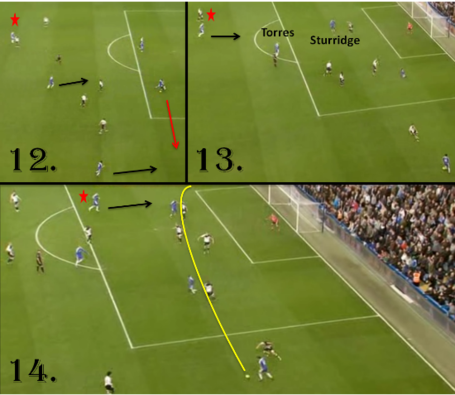 [78:15] Mata collects the loose ball; Lampard starts his run from outside the box.

If it wasn't for Wheater's perfectly timed tackle, Chelsea would have had a 2v2 situation in Bolton's box (Ramires and Sturridge up against two Bolton defenders). But it was not meant to be that way. When Mata collected the loose ball on the right wing, Lampard was pretty far out from the box. The Chelsea number 10's patience on the ball allowed Lampard to catch up.

Also, Torres hung around the edge of the box instead of running into the danger area. Alan Shearer criticized Torres for this "non-movement" in Match of the Day, arguing that the Spaniard would have had a better chance of scoring if he moved closer to the six-yard box to get on the end of a cross. That is an excellent point to make if you are single-mindedly obsessed/concerned with Torres scoring goals. But if you are not, then you would probably realize that Torres' presence at the D distracted Bolton defenders, allowing Lampard to quietly sneak in at the back post.

Anyhow, the cross from Mata was perfect and Lampard, as always, calmly guided the ball into the back of the net.