Share All sharing options for: Chelsea 3-0 Bolton: A much-need moment of respite

Is there any thing more nostalgic at the moment for us Chelsea fans than seeing Didier Drogba thump home a Frank Lampard corner delivery? Well, maybe Frank volleying home coolly at the back post to round off another frolic against Bolton Wanderers. Talk about a total recall. 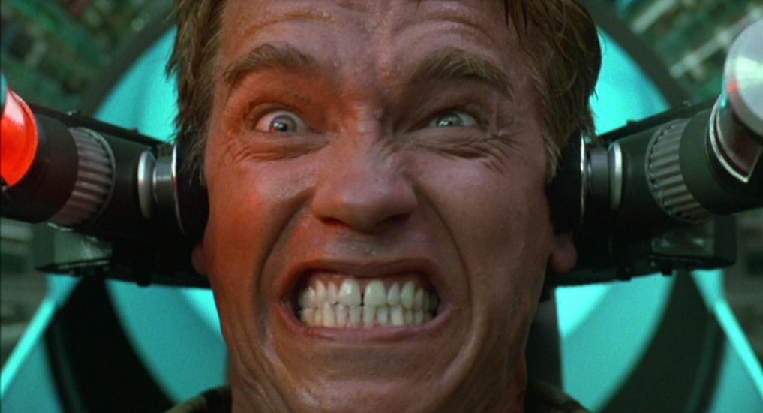 Get your ass to Mars

For much of the past two months, my face has resembled the one unleashed by Arnold in the cinematic still above. It hasn't been fun, it hasn't been joyous - just maddening. Thankfully, Saturday proved to be a cozy day out at the Bridge, with David Luiz and the old guard sparking a surprisingly solid Chelsea side (by recent standards) to a comfortable 3-0 Premier League victory.

Andre Villas-Boas did not take my advice and stick with the 4-2-3-1 formation that has looked promising of late, rather going for the traditional 4-3-3. It worked. I'm not sure if this was a byproduct of us being focused, Bolton being grossly poor or the absence of Raul Meireles certain shit players.  I reckon it was a combination of the three. Either way, we were extremely positive for the most part and played some decent football to boot. Bonus.

The game started well, with the hosts applying plenty of early pressure. There were some decent chances wasted, Frank Lampard in particular mucking up a one-on-one after a great through ball from Daniel Sturridge. Sturridge followed that up by forcing a decent stop out of Adam Bogdan following some good work by Ramires. The rest of the half featured a lot of probing from us as well as plenty of erroneous decisions by the linesman. Sweet.  Yes, there wasn't the early breakthrough we all were craving, but it still had to be viewed as a positive display considering what we had seen in midweek.

Thankfully, our concerns were eased almost immediately after the interval. David Luiz, sick of having nothing to do at the back, took his talents not to South Beach but into the attacking third. Bob started and ended this great move, intercepting a Nigel Reo-Coker pass at midfield before marauding forward, holding off a challenge and picking out Didier Drogba to his left. Drogba's cross to the middle ricocheted back to Luiz, who quickly worked the ball onto his right foot before curling a superb shot around Bogdan and into the far post netting. Sublime.

Reo-Coker snatched a shot wide from the D just moments after Luiz's opener, a good opportunity that kind of woke up Bolton for a short spell. But it was just that, a short spell. On 55 minutes, Luiz nearly added to his day's tally, smacking a header off the far post. A couple of minutes later we were on the move again, Drogba opening up his body on the left side of the box only for his curled effort to shave the top side of the crossbar. This opening coming via a blinding counter attack. We were in the mood.

Tack on another five minutes and we had finally doubled our lead. Mata saw his cross come shot deflected behind for a corner, which Frank Lampard took. It was pure nostalgia from there, Frank picking out Drogba in the center for a platinum header. Game over.

The attacking waves kept on coming, though, and a minute after our second, Lampard again wasted a great chance to add to the lead, taking too much time to figure out what he wanted to do on the left of the box. From the resulting corner, yet more chances presented themselves. Lampard took the kick and chose to pick out Essien at the edge of the box. The Bison took it from there, slashing a fantastic low drive through a crowd that forced Bogdan into a good save low to his right. Both Luiz and Bane had a chance to bury the follow-up, right in front of goal, but the two defenders got in each other's way and the chance vanished.

It didn't matter much as, with 10 minutes to go, Lampard capped a solid display from the lads with a smart volley at the back post. Mata was the creator, picking out Lamps, who was in miles of space at the back post. From there, it was clinical. Wrap up them points, ho.

As for the performance, I think it was pretty self-explanatory. We desperately needed a game like that. No real struggle, no real controversy (on the pitch at least). Nothing to really complain about, either - a minor miracle these days. Now, to follow this up with some progression in our next three outings. That's the task at hand. And you know, there's no reason to believe we can't get it going. Let's have it, boys.

That's all I got for now. Carefree, bitches.